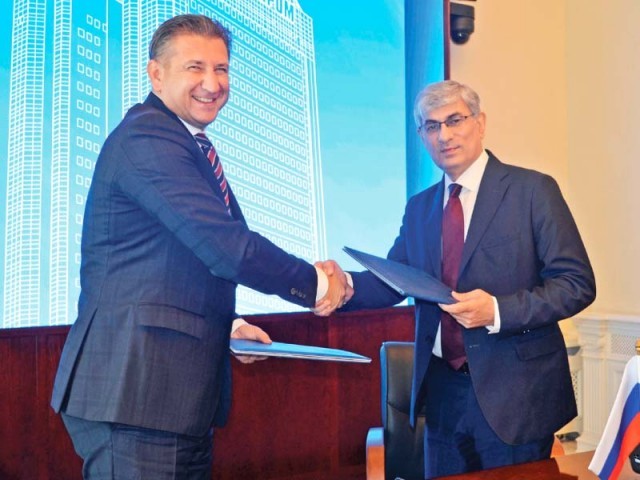 Russia has also offered to export gas to Pakistan to meet its domestic needs. PHOTO: OGDC

ISLAMABAD: In a major development, Russia and Pakistan’s energy giants entered into a joint venture deal that is expected to attract $3-4 billion in the South Asian country.

Russia’s Gazprom International and Pakistan’s Oil and Gas Development Company Limited (OGDCL) signed the Memorandum of Understanding in Moscow aimed at mutual cooperation, joint ventures and use of state-of-the-art technology that would aid exploration and development.

Russia has already expressed its interest to invest $8 billion in Pakistan and a major part of it will go in the country’s ailing energy sector.

A senior official of the petroleum ministry said that the chief executive officer (CEO) of Gasprom International will arrive in Pakistan on Friday along with his team to discuss possibilities of investment in different projects.

Pakistan is already in talks with Russia to invest $2 billion to build the North-South pipeline that would transport LNG from Karachi to Lahore.

Russia had also offered to export gas to Pakistan to meet its domestic needs. Moscow is a major supplier of gas to Europe and Turkey and was working to tap Pakistan’s market as well before its tussle with Europe and the United States on Ukraine issue.

The deal with OGDCL

According to the statement, the agreement was signed in Saint Petersburg on July 3, 2017.  Both companies were represented by their CEOs.

Under the cooperation framework, Gazprom International will explore investment opportunities in Pakistan in coordination with OGDCL.

The Russian company has agreed to introduce latest and state-of-the-art technology for production enhancement in OGDCL-operated fields in Pakistan.

The duo will cooperate in the commercialisation of stranded or marginal fields which is likely to significantly add to OGDCL’s production and revenues. Parties have also decided to cooperate in oil and gas infrastructure development and import of hydrocarbons to Pakistan from joint fields.

In order to ensure effective implementation of the MoU, parties have agreed to form a Joint Working Group, which will hold its first meeting in mid-August 2017.