Zardari asks Nawaz to ‘put up with conspiracies’

Zardari asks Nawaz to ‘put up with conspiracies’

PPP leader advise­s PM to act like a lion and step down if crisis worsen­s
By Z Ali
Published: July 6, 2017
Tweet Email 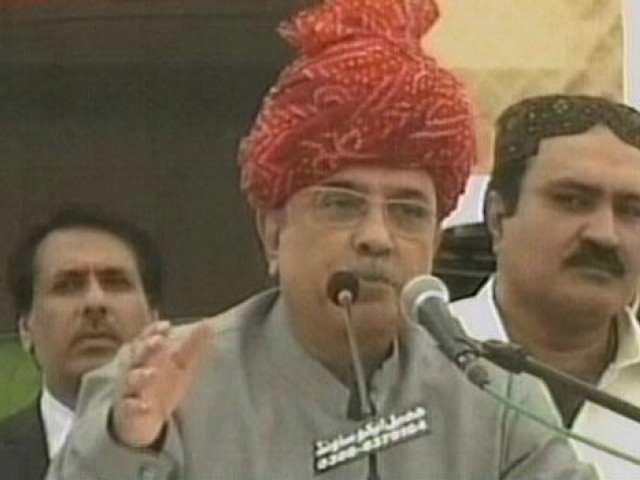 HYDERABAD: Responding to Prime Minister Nawaz Sharif’s recent statement about a conspiracy being hatched against his government, the former president and PPP Co-chairperson Asif Ali Zardari has advised him to ‘put up with the conspiracies’.

Speaking at a PPP gathering in Khipro area of Sindh’s Sanghar district on Thursday, Zardari reminded Sharif that in the past the PPP stood him in good stead ‘when the PML-N was confronted with conspiracies’ after the 2013 elections.

“But you didn’t care about us. [Rather] you stabbed us in the back. Disturbed our friends, provincial government, bureaucracy,” he added.

The former president, however, expressed desire to see the current parliament complete its five-year term as he advised Nawaz Sharif to appoint some other leader from his party as the next PM if he finds himself in dire straits due to the ongoing Panamagate probe.

“You [PML-N] have majority. You may bring in a new PM. And you [Sharif] may keep facing the cases. What’s problem in it? What’s the big deal? It’s a small matter,” he added.

The PPP co-chairman avoided making any comment on the ongoing inquiry into the Panamagate scandal by a joint investigation team (JIT) and said they were waiting for conclusion of the probe but criticised the prime minister for buckling under pressure.

“Some pressure is being exerted on him [Sharif] and he seems unable to sustain it. But I want to say to Mian Sahib to become a lion because you have chosen the [election] symbol of lion,” he counseled.

The PPP leader slammed Sharif for his reluctance to leave the PM house and for also shying away from the cases. “If you cannot do this then why are you doing politics?” he questioned.

Zardari said ‘jail’ and ‘throne’ are part of politics as he recalled his own imprisonment which started during 1996-99 tenure of Sharif and lasted eight years.

He also denounced former military ruler General Musharraf ‘who calls himself a commando’ but is too afraid to face the cases against him in Pakistan. He said he was an ordinary person in comparison to a ‘mentally and physically strong commando’ but claimed that his passion was stronger than Musharraf’s.

“We get this passion from Shaheed Zulfikar Bhutto and Shaheed Benazir Bhutto. She [Benazir] was 24-year-old when she went to jail and all her ‘uncles’ left her.”

Reiterating that Benazir’s assassination was a ‘very big international conspiracy’ against Pakistan, he said the country still faced threats.  “I still fear because Pakistan’s control is in the hands of these stupid people. They only know how to sell the iron bars but not how to make governments and to run them,” Zardari said in an apparent reference to PM Sharif whose family owns steel business.