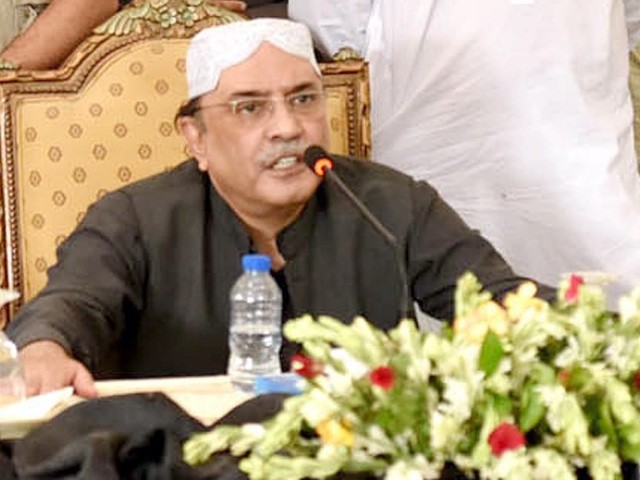 HYDERABAD: The PPP on Wednesday observed black day on the 40th anniversary of dismissal of an elected government by a military dictator as its co-chairperson, Asif Ali Zardari, blamed the ‘martial mindset’ for obstructing the development which Pakistan could have attained in last seven decades.

“Many friends say China and other countries progressed so much in last 70 years but Pakistan could not. But they forget Pakistan was ruled by the martial mindset for 40 years,” Zardari said while speaking at a party gathering hosted by MNA Rafique Ahmed Jamali in Dadu district.

Zardari recalled that on that day in 1977 former army chief Ziaul Haq removed the elected government of Zulfikar Ali Bhutto, adding that Bhutto knew that he would suffer the consequences of confrontation with the USA.

“He did so on the backing of you people. Bhutto preferred to write history by sacrificing his life over striking a deal with the military dictator. The people who don’t want to live in history fear Panama and jails,” said Zardari in a critical reference to Prime Minister Nawaz Sharif.

Next PM from PPP, predicts Zardari

He took credit for the ongoing investigation against Sharif and his family and said accountability would not have been possible without the 18th constitutional amendment.

The PPP co-chairman said democracy improves and strengthen by means of evolution and that the process corrects itself by removing its intrinsic faults.

“This one [the PML-N] is a small fault. You [the people] will see in the next election that this fault will be removed and the bat [the election symbol of PTI] will also not get any advantage.” Despite this assertion, Zardari hinted at the likelihood of losing the 2018 general elections in Punjab.

“Even if they [PML-N] win elections [in Punjab] by deploying stratagems like laptop scheme or in the name of Quaid-e-Azam, it won’t mean that the PPP no longer exists. It will still exist. When Bilawal [Bhutto Zardari] will lift up the party, he will lift it up from there [Punjab],” he claimed.

He disclosed that he is at loggerheads with his daughter Aseefa Bhutto Zardari over the selection of electoral constituency for the latter to contest the elections. “She wants to fight elections from Lyari but, I want her to stand from Nawabshah.”

Zardari again claimed that the PML-N’s federal government stole the PPP’s concept of the China Pakistan Economic Corridor (CPEC). He went on to briefly elaborate his contention that Punjab was now receiving greater advantage under the CPEC than what the PPP had envisaged.

“But it makes no difference,” he added.

According to him, under the project industrial units were supposed to be set up with the help of Chinese investment around the port cities in Sindh and Balochistan. Khyber Pakhtunkhwa was supposed to provide a land route by connecting the two provinces with the trade route, he added.

The PPP leader mocked the PM for misunderstanding what the term ‘game changer’ really meant. “It [CPEC] is not simply a game changer. It will change the whole region.”

As part of black day commemoration, the PPP leaders and workers held protest rallies in many cities and towns of the country. The party also organised seminars and public meetings, where PPP leaders renewed their resolve to dislodge dictatorship through democratic dispensation.

[WITH INPUT FROM OUR CORRESPONDENTS IN KARACHI, LAHORE & PESHAWAR]