Afghan Ministry of Defence spokesperson says operations will destroy enemy nests on either side of the Durand Line
News Desk July 05, 2017 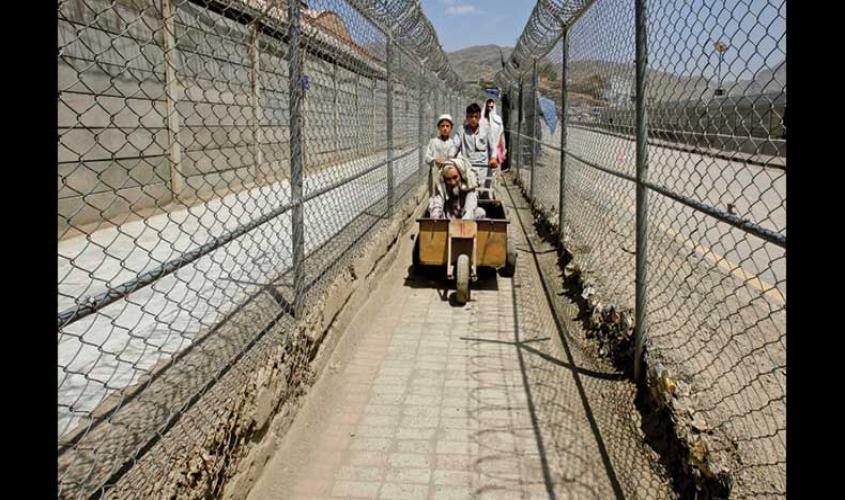 Men coming from Afghanistan move down a corridor between security fences at the border post in Torkham, Pakistan on the Durand Line on 18 June 2016. PHOTO: REUTERS
The Afghan Presidential Palace said on Wednesday that Afghanistan and Pakistan will conduct joint operations against terrorists and their safe havens along the Durand Line, TOLO News reported.

According to the Afghan authorities, the development came after US senators paid a visit to Pakistani military officials and assured Afghanistan that Islamabad, in coordination with Kabul, will conduct the joint operations.

President Ashraf Ghani’s spokesperson, deputy Najibullah Azad, said the operation would be conducted under the US supervision. “Both the countries will launch operations in their territory against terrorists and oversee the US operations.”

Now it's your turn to do more, COAS tells neighbours

Ministry of Defence (MoD) deputy spokesman Mohammad Radmanish said, “This means that both the countries launch operations on their territory to destroy enemy nests on either side of the Durand Line.”

Meanwhile, it appears that Afghan Chief Executive Dr Abdullah Abdullah is cautious about the operation and said: “If the United States does not supervise the situation closely, the operation will not bring any favourable results.”

“If the US monitoring takes place, both sides can take military action after identifying the terrorist centers,” Dr Abdullah’s spokesperson Mujib Rahimi said.

Four years ago, the two neighbouring countries army chiefs had agreed to launch a joint operation along the Durand Line, but the agreement was never carried out.

The five-member bipartisan delegation which was made up of senator John McCain and fellow senators Lindsey Graham, Elizabeth Warren, David Perdue and Sheldon Whitehouse, arrived in Kabul on Tuesday after holding discussions with Pakistani officials in Islamabad.

The congressional delegation stressed the need for the elimination of the Taliban and their safe havens.

They said the deployment of additional troops to Afghanistan was needed and that more authority should be given to these forces to win the war in the country.

On June 24, Army chief General Qamar Javed Bajwa stated that it was about time for the other stake holders particularly Afghanistan to do more in the fight against terrorism.

“Unfortunately our sacrifices against terrorism are not well acknowledged and we are often subjected to demand of do more,” the army chief was quoted as saying by the Inter-Services Public Relations (ISPR).


He said that since 9/11, Pakistan is one of the few countries which have borne the brunt of terrorism and made monumental sacrifices to effectively neutralise the menace in its state territories.

Hinting at both India and Afghanistan’s involvement in the grisly bombing at the shrine of Lal Shahbaz Qalandar in Sehwan that killed over 75 people, Gen Qamar had stated that the army will show no restraint for anyone.

Days after the week of violence, Pakistan Army had launched Operation Raddul Fasaad across the country.

Afghan President Ashraf Ghani will be meeting Prime Minister Nawaz Sharif on the sidelines of a four-nation meeting in Dushanbe, the capital of Tajikistan, Pajhwok Afghan News reported on Wednesday.

Tajikistan is hosting a Quadrilateral Summit of CASA-1000 comprising of Pakistan, Afghanistan, Kyrgyzstan and Tajikistan.

The two top leaders, who previously met on the sidelines of the SCO Summit in Astana, would discuss terrorism and relations between Kabul and Islamabad, id added.