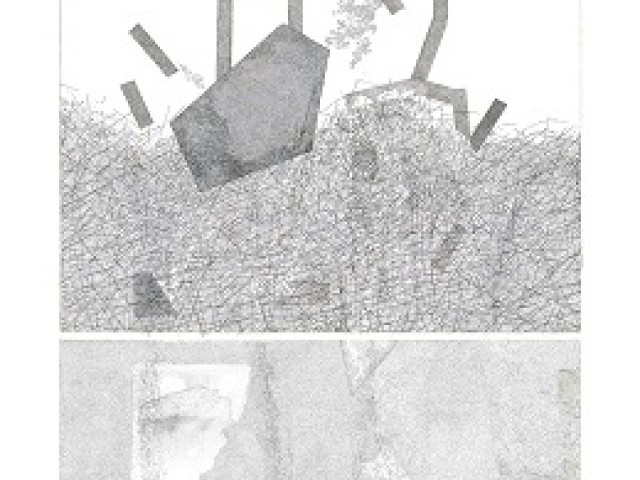 KARACHI: A budget is needed to improve the centuries-old Tulamba, which is a victim of neglect, artist Farrukh Adnan told The Express Tribune at the opening of his exhibition ‘Enigmatic Spaces’ at the Koel Gallery.

Sharing his concerns about the poor condition of his hometown, Adnan said his work focuses on the demolished areas of Tulamba, a city in Khanewal district, and is the outcome of a researched-based effort to map out the changes in and beauty of Tulamba.

Adnan’s work on space and society explores how space changes socially and politically overtime and how history has evolved recently.

Living in Lahore, Adnan graduated in 2009 with a bachelors degree in communication design from the National College of Arts (NCA) in Lahore. After his degree, Adnan made use of his graphic design skills for three years as a full time visual artist at various advertising agencies and design houses. He also took on a few projects as a design consultant. Along with this, Adnan also works as a photographer for public and art projects in Pakistan.

He has set up his own art studio and is currently teaching photography and graphic design at NCA.

“I am very connected to Tulamba through my childhood, which is why I was inspired to carry out research-based work on the demolished areas,” Adnan shared.

Using monochromic tones and the medium of pen and ink on canvas, Adnan said that after finishing, the texture of the canvas was leather-like because of the amount of layers he used.

“People are damaging the area and it is changing rapidly every year,” he said, adding that many families migrate to Tulamba in search of low-cost housing since most areas are abandoned.

Adnan’s work is more than an intellectual investigation into Tulamba’s ancient history or a physical documentation of its current indigent circumstance, according to artist Salima Hashmi.

She believed that Adnan’s research process involved uncovering the many layers of history that crowd the terrain of this part of Punjab. The Harrappan Civilisation is spread all over this area, she said.

“Adnan’s drawings are keenly and complexly informed by the history and the culture of ruination. His work has long drawn on the more politically pressing contemporary reality of urban planning and public architecture,” reviewed artist Aasim Akhtar.

“The cloud-like swarming of architectural drawings has the effect of blurring distinctions between forms and effacing the outlines of familiar historical narratives,” Akhtar said.

The show continues till July 18.