All five childr­en drowne­d and later their bodies were recove­red by rescue offici­als
By Shamsul Islam
Published: July 1, 2017
Tweet Email 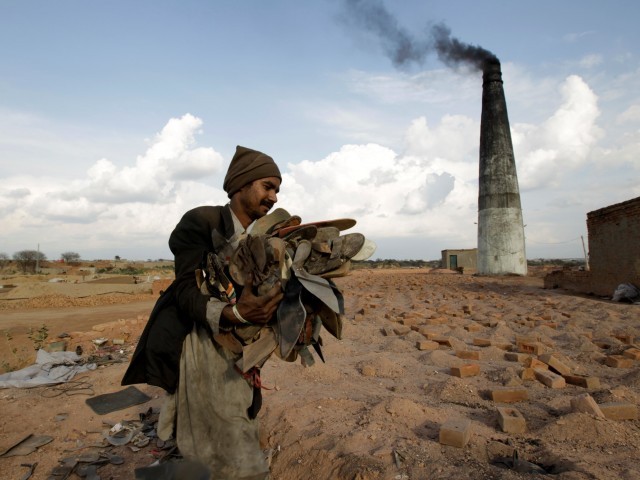 A worker carries shoes to be burned in the kiln of a brick factory in Islamabad, Pakistan March 9, 2017. PHOTO: REUTERS

FAISALABAD: It was late Wednesday when rain started lashing Jhang and its adjoining areas. The hours long rain submerged roads and paralysed routine life in the district. Rainwater filled almost all streets and ponds in the area. Nobody knew that tragedy was about to strike Kotli Baqir Village and the natural calamity would end lives of five innocent children.

Eight-year-old Saima Aslam, her sister Sana Aslam, 4, Misbah Riaz, 10, nine-year-old Ziaur Rehman and Saqlain Abbas, 7, were playing on the premises of a kiln on Jhang-Khushab Road when they fell into a deep pond that was filled with rainwater.

As a result, all five children drowned and later their bodies were recovered by rescue officials.

While speaking to The Express Tribune on Friday, Muhammad Younis, father of deceased Ziaur Rehman said, “My son and other children died due to the negligence of the kiln owners.” He added, “The kiln owners have dug four deep ponds on the land for storing water which is used in preparing bricks.” He pointed out, “They did not take safety measures while digging the ponds which became death traps after the heavy downpour.”

Gone Too Young: Boy bludgeoned to death in Shahdara

Younis maintained the kiln owners were fully aware of the threats after the ponds were filled with rainwater but they failed to caution the villagers and children regarding the dangerous conditions.

“I admit it is the duty of parents to take care of their children and not allow them to play in rainwater but the kiln owners and their employees knew the children were playing in that area and they should have stopped them,” he complained.

He said Ziaur Rehman was the youngest of his three children and was studying in Class 4. He demanded the authorities to provide him justice and award punishment to those responsible for the incident.

Villager Muhammad Ameen told The Express Tribune that the Kotli Baqir Village is located on upper side while there is a kiln which is situated adjacent to the village on a lower side. He said, “The owners of the kiln have dug various ponds on the land for making bricks which were full of rainwater.”

He added, “When the incident occurred, the children were playing near the ponds. Neither their parents nor the children realised that the ponds were deep and it could result in a tragedy.”

Ameen revealed the area people came to know of the situation when one of the children shouted for help. “But by the time the villagers reached the spot, all children had drowned, he lamented.

Meanwhile, when contacted, Athara Azari Police Station SHO Tasawwar Munir told The Express Tribune, “The victims were playing near a pond in the premises of the kiln when they fell in it and drowned.” He added, “After hectic efforts, the locals and rescuers retrieved the bodies from the pond.”

The SHO maintained the police have registered a case against kiln owners Sheikh Muhammad Aslam, Abul Hassan and Ghulam Mustafa under Section 322 of the Pakistan Penal Code.

While speaking to The Express Tribune, investigation officer of the case Sub-Inspector Rustam Khan said, “We have arrested Abul Hassan and Ghulam Mustfa while Aslam is still at large.” He pointed out, “The accused would be arrested soon.”

He said the police have collected evidence from the site and it transpired that the accused were responsible for digging ponds and they failed to take safety measures.

He said, “The villagers also testified during the course of investigation and they held the kiln owners responsible for the incident.

50 women get dowry funds in Bahawalpur