Say they will not call off sit-in until army chief visits the region­
By Mehdi Hussain
Published: June 29, 2017
Tweet Email 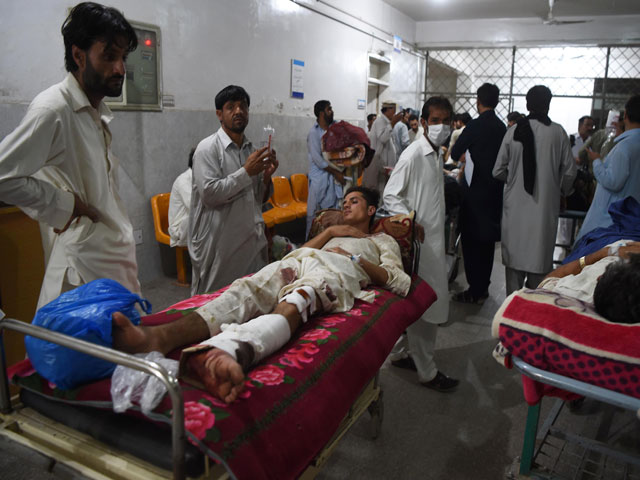 People injured in the twin blasts in Parachinar being treated at a hospital in Peshawar on Friday, June 23, 2017. PHOTO: AFP

Enraged mourners protesting last week’s deadly bombings in Parachinar refused to budge on Wednesday as they rejected monetary compensation offered by the prime minister saying they would not call off their weeklong sit-in until the army chief visits the region.

Premier Nawaz Sharif announced 1 million rupees compensation for the families of every victim of the twin blasts, and 500,000 rupees for the wounded, but the protesters dismissed that, saying “we need to be recognised as human beings first”.

The prime minister has already directed Khyber-Pakhtunkhwa Governor Iqbal Zafar Jhagra to pay the money. Interestingly, the directives came almost a week after the deadly attacks claimed by a faction of the sectarian terrorist group Lashkar-e-Jhangvi.

Thousands of people began a sit-in at Shaheed Park, Parachinar, soon after the two bombs went off on Friday evening, as shoppers were out buying supplies in preparation for the breaking of the fast on one of the last days of the holy month of Ramazan. At least 75 people were killed and many more wounded when the bombs ripped through the busy marketplace crowded with shoppers.

The crowd, already angry over what they see as the failure of authorities to ensure security, has become more enraged by the shooting dead of three protesters by police trying to keep order. Authorities have not confirmed that three protesters were killed, saying only they were investigating.

“We are tired of picking up the dead bodies of our people,” said Arshad Umerzai, the special assistant to Khyber-Pakhtunkhwa chief minister on technical education. Umerzai said the prime minister and the army chief should visit Parachinar in response to the violence the town has suffered. Sectarian terrorists have repeatedly detonated bombs targeted at the Shia community that lives there.

Army chief Gen Qamar Javed Bajwa was due to visit the area two days ago, but he had to postpone his visit due to inclement weather.

“Pashtun have become a scapegoat and are being killed everywhere,” Umerzai said. “We will not allow spilling of Pashtun blood anymore,” he added and threatened to bring Peshawar city to a standstill if the federal government failed to meet the demands of Parachinar tribesmen by July 1.

Meanwhile, former interior minister Rehman Malik’s helicopter was not allowed to land in Parachinar. He was accompanied by former deputy speaker of the National Assembly Faisal Karim Kundi. “Shortly before the landing, the pilot was told that security agencies have intercepted calls that it would be targeted if it landed,” a close associate of Malik told the media.

PPP Chairman Bilawal Bhutto Zardari strongly reacted to development, saying: “I cannot understand why Parachinar has been made a no-go area after the bombings.” In a statement Bilawal’s media office quoted him as saying that the PPP delegation had been forced to return.

The PPP also moved an adjournment motion in the Senate to debate the Parachinar bombings and the post-blast deadly shooting by security agencies.

Security forces stopped media crew from travelling into the town to cover the protest on Thursday, saying they needed special permission.

The protesting tribesmen allege that the government was trying to hide the reality “that’s why it is not allowing the media and politicians to visit Parachinar and see the realty for themselves”.

(With additional reporting by our correspondents in Islamabad and Peshawar)