Wang Yi says China stands by Pakist­an for its develo­pment and curbin­g the menace of terror­ism
By Sardar Sikander
Published: June 25, 2017
Tweet Email 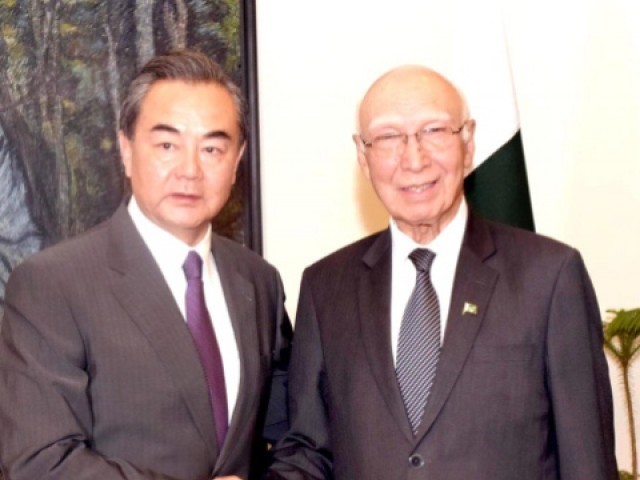 Wang Yi, the Chinese Foreign Minister, who arrived in Islamabad on Saturday, is scheduled to hold meetings with senior military and government officials during his two-day visit to Pakistan.

In a meeting with Punjab Chief Minister Shehbaz Sharif, the Chinese minister said that Beijing stood by Pakistan for its development and curbing the menace of terrorism in the country.

“[The] China-Pakistan Economic Corridor will bring economic stability in the region and Beijing will fully support in the developmental process of Pakistan by this mega project,” Wang was quoted as saying.

A brief official statement from the Press Information Department confirmed that the Chinese dignitary would hold talks with Pakistani leadership on “matters pertaining to peace and stability in Afghanistan”.

It said Pakistan and China were cooperating closely for peace and reconciliation in Afghanistan. “During meetings, the entire gamut of bilateral relations will also be discussed.”

A government official, requesting anonymity, said an uptick in terrorism in Afghanistan and Pakistan has raised the concerns of Chinese side which believes that peace in the region is the key to the pursuit of mutual regional prospects of the countries.

The visit takes place at a time when Islamabad and Kabul are faced with an alarming resurgence in terrorism activities and have exchanged barbs. Alongside this spate of tension, Pakistan has accused India of increasing state-sponsored terrorism in the Indian Occupied Kashmir and having a role in violent activities in Balochistan.

Recently, terrorist attacks were reported from Quetta, Parachinar, Karachi, Mastung, Gwadar and other areas that claimed several lives. Likewise, Afghanistan has also faced multiple terrorist attacks in the recent days. Both the countries have accused one another of harbouring terrorism. The abduction and killings of two Chinese nationals in Quetta have also added to China’s concerns.

The issue of security and Pak-Afghan tension was actively discussed on the sidelines of the recently-held Shanghai Cooperation Organisation (SCO) Summit in Astana where Pakistan and India were admitted to the SCO fold as full members, the insider said.

Reportedly, Prime Minister Nawaz Sharif, who is presently in the UK, has extended personal assurances to Beijing for foolproof security to Chinese nationals and to take adequate steps for ensuring peaceful business and investor-friendly climate in Pakistan. In this connection, Sharif’s visits to Gwadar and Gilgit-Baltistan, where China has high takes, are also expected in a bid to allay China’s concerns.

Envoy to US: Pak-Afghan cooperation needed

In addition, Pakistan is also mulling over setting up a Special Security Division employing some 15,000 military personnel under the ambit of Interior Ministry for the CPEC security.

Speaking to The Express Tribune, political analyst Kanwar Dilshad said conducive regional environment is the key to China and Pakistan’s mutual prospects regarding the CPEC as well as bilateral ties.

“Beijing is fully cognisant that peace is the key to the desired objectives. For this purpose, stability in Afghanistan is essential. In order to achieve the longstanding goals of lasting peace, stability and regional prosperity, it is imperative that Afghanistan and Pakistan come together to set aside their differences and forge cooperation on diplomatic and strategic fronts.”

Dilshad said India’s efforts to exert influence in Afghanistan have failed to yield results and Kabul as well as Western powers are realising that Pakistan’s role of engagement is essential for lasting peace and stability in Afghanistan. “Otherwise, peace would remain a far-fetched notion and the region would continue to suffer.”