Day before its inauguration, Karachi's University Road ‘defaced’ by Jamaat-e-Islami

Day before its inauguration, Karachi's University Road ‘defaced’ by Jamaat-e-Islami

Tent pegs nailed into newly constr­ucted road on Sunday to set up a camp
By Our Correspondent
Published: June 13, 2017
Tweet Email 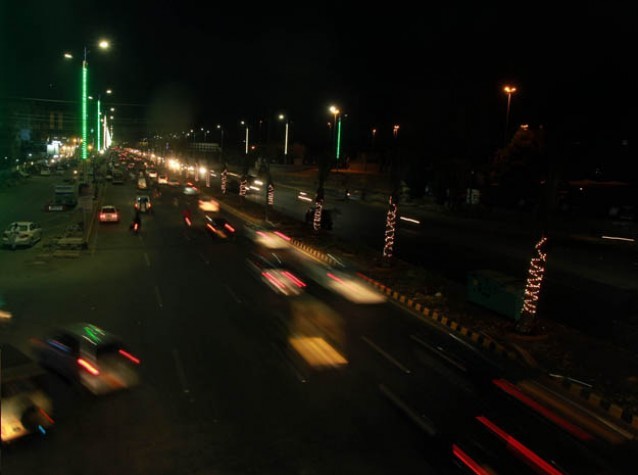 The construction of University Road has spanned five-and-a-half long months in which citizens have suffered tremendously. PHOTOS: ATHAR KHAN/EXPRESS

KARACHI: A day before its inauguration, the newly constructed University Road was ‘defaced’ when Jamaat-e-Islami (JI) set-up an iftar camp for their ‘Awami Iftar’ on Saturday.

The party’s amir also addressed supporters during the iftar. Workers setup the camp on main University Road by nailing four tent pegs into the road’s surface near Baitul Mukaram Mosque.

The road was completed after five-and-a-half months and was inaugurated on Sunday night by Chief Minister Murad Ali Shah.

A resident, Mohammad Akbar, while commenting on the incident, said that rather damaging the main road even before its inauguration, JI could have arranged their iftar event at a mosque. “This road has been built after great pains were taken to draw the attention of the government towards it but the JI tried to ruin the road as soon as it was constructed,” he lamented, criticising the political party.

Public transport drivers to get lectures on road safety

Former mayor and Pak Sarzameen Party Chairperson Mustafa Kamal also criticised the JI and said that they were asking people to open their fasts with them but were destroying roads in the process.

“We have made efforts for the [construction of] University Road and we fixed it because we own this city and every street of Karachi,” he said.

Karachi Development Authority Assistant Engineer Kamran Arshad, who is in charge of repairing damaged roads, told The Express Tribune that he was unaware of any such incident in which main University Road was damaged. However, he said that an FIR could be filed by concerned residents if they suspected anyone of being involved in damaging the road, after consulting with the project manager of the newly built road.

JI Spokesperson Zahid Askari told The Express Tribune that holes made due to pegs are not that big but regardless the holes have been filled by their party member. “We take care not to damage public property and feel it is our responsibility to clean those places after any activity [by our party],” he added.

Askari remarked that since there are no designated places to carry out such activities they set up camp on the newly built road.