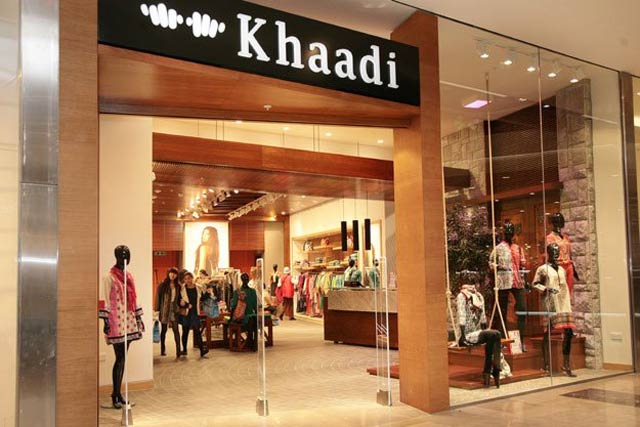 Brand continues to distance itself from protesting factory workers, saying they are instead employees of TexMark. PHOTO: KHAADI

KARACHI: Khaadi, arguably the country’s leading clothing brand, has been for days trying to slip its way out of the spotlight after dozens of workers raised serious allegations of labour law violations against the brand.

Days after news broke that Khaadi and its unofficial workers’ union reached an agreement to end the dispute, the clothing brand continues to distance itself from the workers, insisting they are not their employees but are in fact employed by a “third-party vendor” TexMark.

Speaking to The Express Tribune on Tuesday, Khaadi spokesperson Mohammad Usman said, “The agreement only stated that Khaadi would ensure labour laws are implemented where our products are made through vendors.”

Earlier this month, around 32 employees of Khaadi were allegedly fired while another 125 had to take a stay order when they started unionising for basic rights at their workplace.

Demonstrations were held in London, Karachi and Lahore by the company’s workers and activists who called upon the brand to acknowledge the violations.

Labour rights organisation National Trade Union Federation (NTUF) held a press conference on June 5 to announce it reached an agreement on behalf of Khaadi’s workers with the international brand’s management, who accepted all demands put forward by over 150 workers.

Participants of the press conference witnessed Usman sitting on the back seats of Karachi Press Club when the presser was being held as three labourers presented themselves as Khaadi’s employees.

When asked if Khaadi owned any manufacturing units or factories in Karachi, Usman declined to comment, saying the question had “nothing to do with the agreement and the press release issued following it”.

He also refrained from responding to a question on the number of Khaadi employees who produce their goods, telling The Express Tribune, “It doesn’t matter if the number is 600,000 or just 60 because the agreement or the press conference that followed was not about it.”

Does Khaadi have factories in Karachi?

Plot D-106 in Karachi’s SITE area is known for being a Khaadi property. Around 500 metres away from its Unit III, a police patrol on its routine duty was asked for directions to the plot. “That’s Khaadi’s address, it’s just round the corner, see,” said a constable, pointing towards the factory with large maroon gates where workers could be seen leaving after finishing their shift at 2pm.

Three workers leaving the premises also confirmed that the factory belonged to Khaadi. “It is not a Texmark factory. We produce Khaadi products and were hired for the company. They started saying it was Texmark’s unit just recently. We don’t believe this,” said one worker as he sped off on his bike.

Another worker outside the factory at Site, who chose to remain anonymous, agreed. 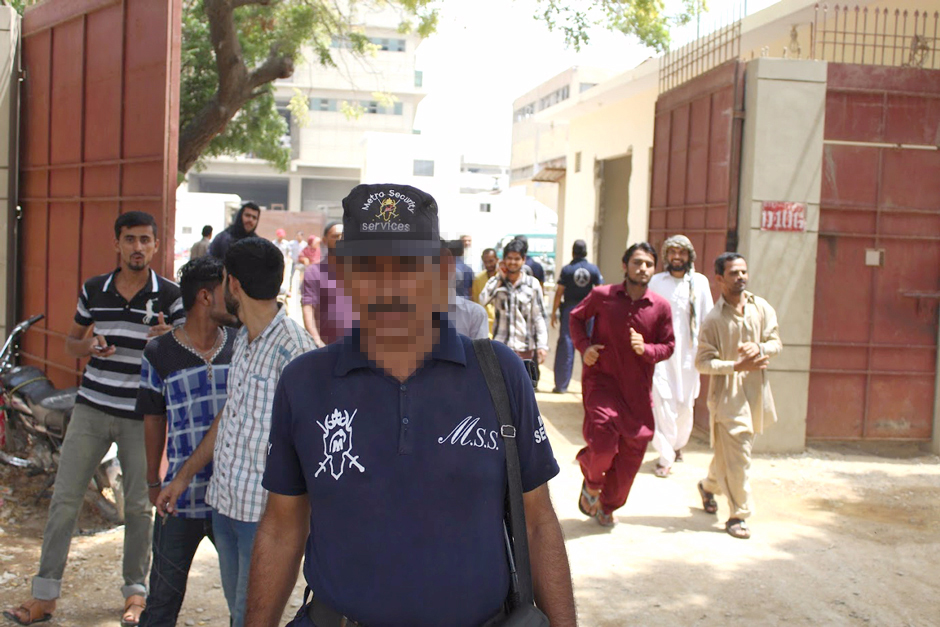 Khaadi workers coming out of D-106/Site plot after finishing their shift.

“Why do they have to hide behind Texmark when we know it’s Khaadi we are working for. We were appointed to work for Khaadi and told that we will become permanent employees after three months but they did not keep their word,” he said.

“We stitch Khaadi kurtas day in and day out at this sweatshop that are put inside boxes with Texmark’s inscription. It’s very confusing. Where do we go for our rights? Khaadi or this new face Texmark?” he added. 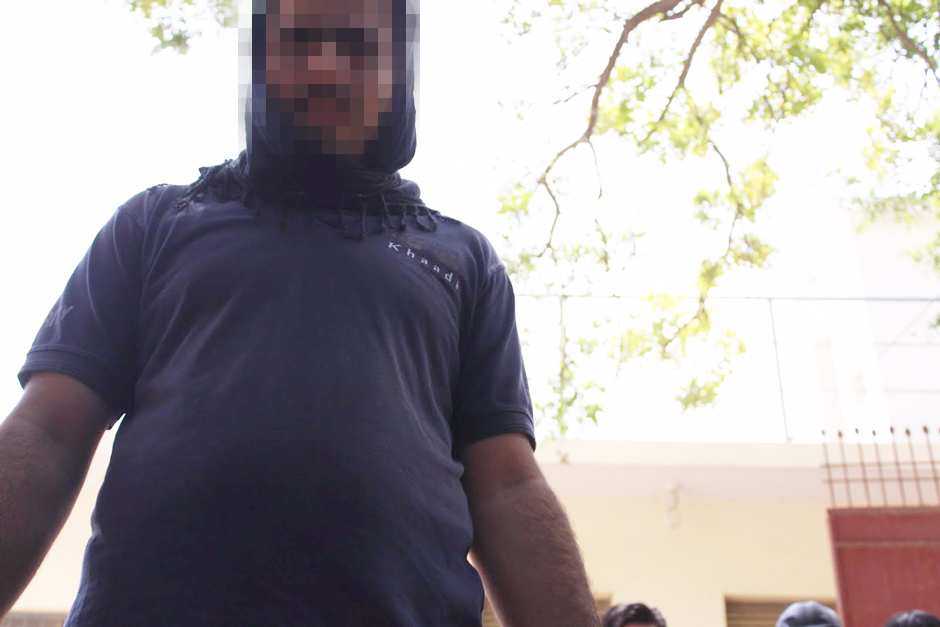 A security guard wearing ‘Khaadi’ T-Shirt questioning the author after he was asked by the administration to do so.

Further, well-reputed architecture firm Arshad Shahid Abdullah (ASA) claims on its website of having designed one of Khaadi’s factories and its office in Karachi. Meanwhile, in a report published online, students of the Institute of Business Administration (IBA) claim to have toured Khaadi’s factory in Karachi where they witnessed their products being manufactured. 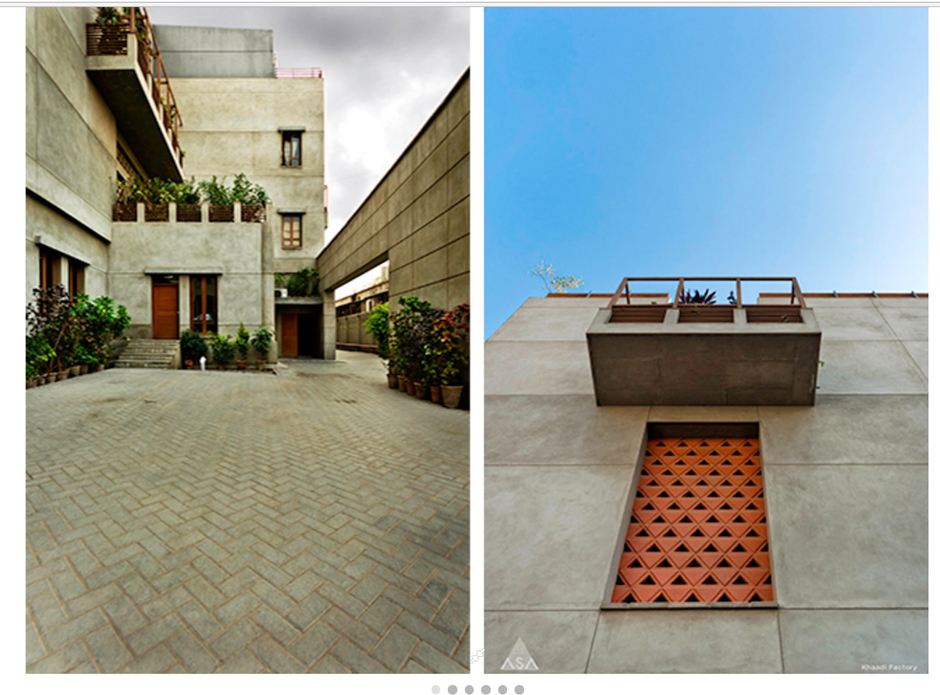 A screenshot of ASA website in which the architecture firm claims building Khaadi factory and office. 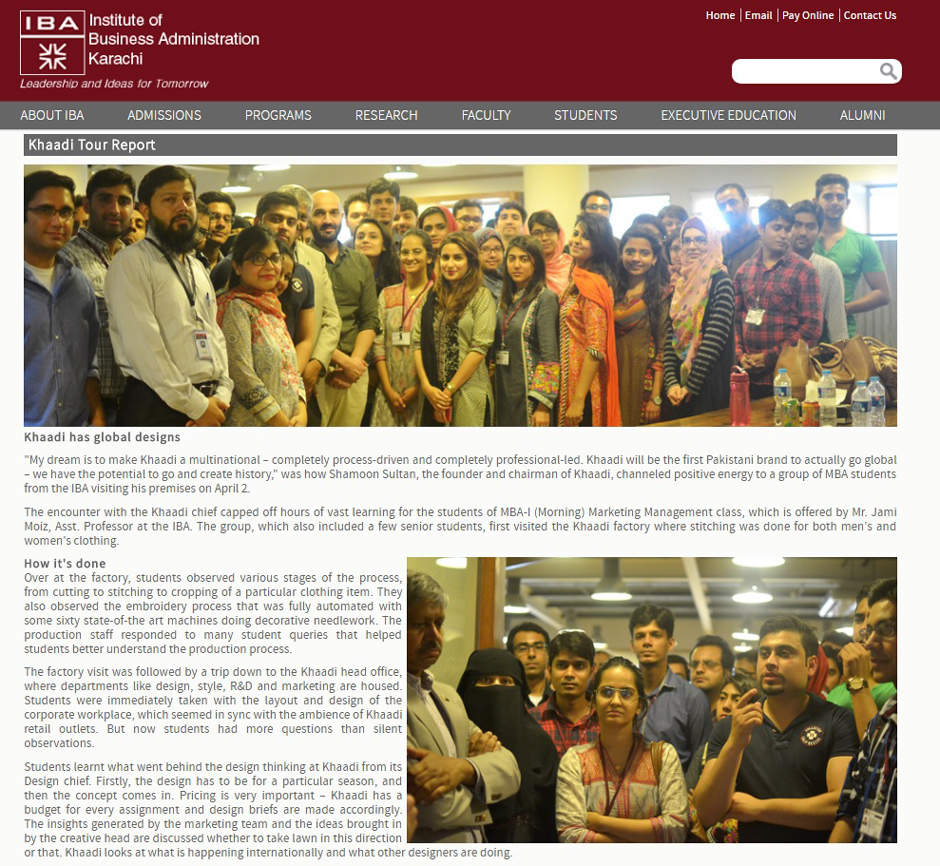 Interestingly, after initially ensuring National Industrial Relations Commission (NIRC) that the 32 factory workers were said to have been asked to leave were their employees, Khaadi was quick to backtrack from its statement, saying the workers were employed through a third-party contract also known as a vendor. 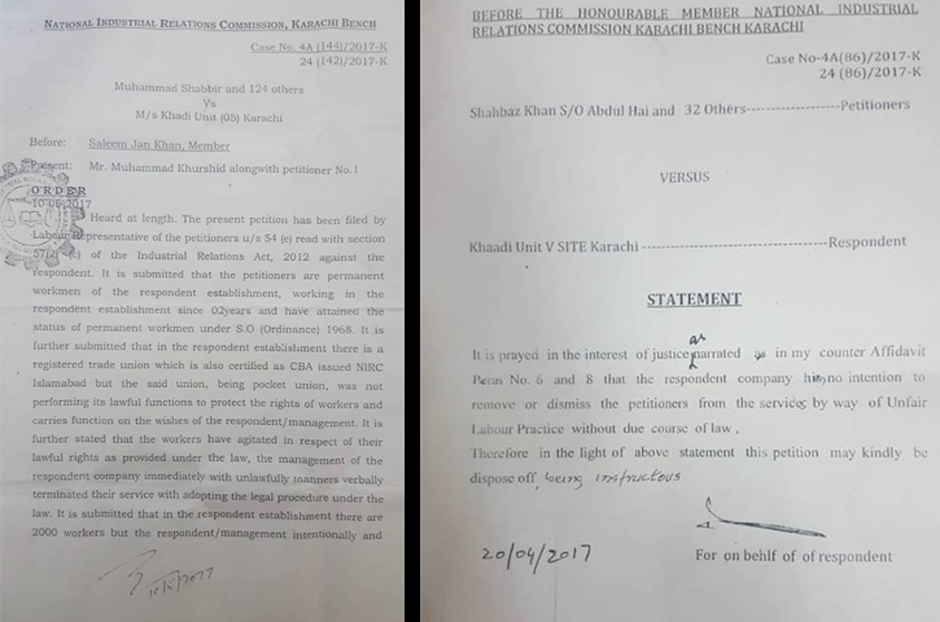 Scanned copies of petition submitted to NIRC and Khaadi’s reply wherein it accepted the workers were their own.

“When they came on the discussion table with us, we had at the very outset asked them to stop using the name of vendor Texmark and accept that it was actually a Khaadi manufacturing unit where workers had been bearing labour rights violations and later on removed when they protested,” Mansoor said.

In light of the historic Supreme Court verdict of 2013 against third-party contracts and certain law clauses, it is illegal for any company to relieve itself of responsibility of its workers by handing the manufacturing task to a vendor, says Karamat Ali, a veteran human and labour rights activist long associated with Pakistan Institute of Labour Education and Research (Piler).

The labour rights expert goes on to say that Khaadi should accept that it’s their own workforce which makes its production possible. He cites the Industrial and Commercial Employment (Standing Orders) Ordinance, 1968, which states that any company which has 20 or more labourers who are employed to work more for more than three months of time should deem these employees as their own and make them permanent.

“Unfortunately, Khaadi is running a fraud by saying that it’s getting work done through vendors. This is against our law, constitution and the rules set by International Labour Organisation (ILO),” says Ali.

He goes on to warn that this dispute might force the European Union (EU) to take notice since Pakistan is a beneficiary of the Generalised System of Preferential (GSP+) scheme which allows it to export products without duty.

“The EU will investigate the issue if they don’t mend their ways. They will be held accountable by the union itself and they can backtrack on the GSP+ Scheme with Pakistan,” he says.

The activist said that Pakistan is already going through a hard time as is depicted in the recent budget and losing this scheme, which gives us a hefty benefit of $1.3 billion, could result in disaster for the economy. Ali went on to urge the government to intervene and act against the Khaadi management.

The ongoing dispute between the management and workers goes back to April this year when the latter began demanding for their due rights. They were allegedly warned, barred from entering the factory, threatened, and eventually forcibly removed by Khaadi.

The workers were asking for minimum wage, appointment letter, clean drinking water at the workplace, availability of washrooms and the right to use them when they feel the urge to, stable hours with no pressure to do the overtime, social security and EOBI cards, and their registration as permanent workers of Khaadi. 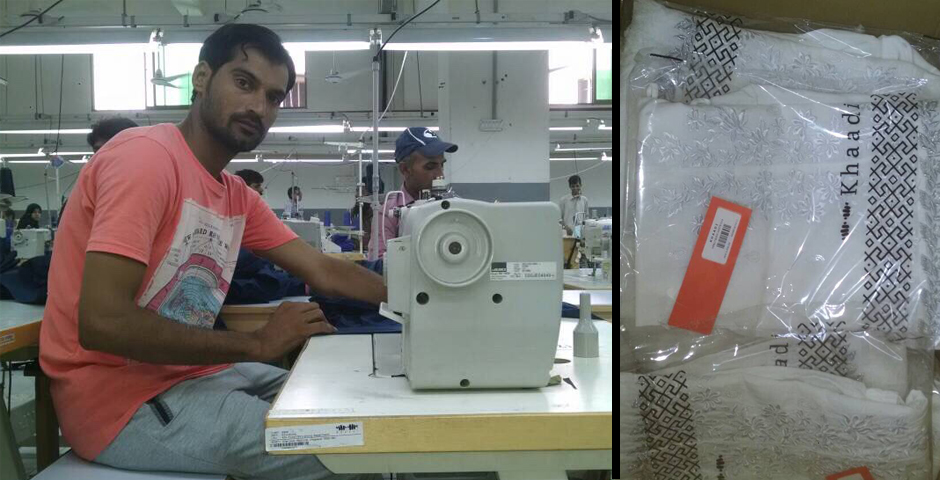 Picture (Right) shows a worker with an equipment that has a stamp of Khaadi on it. Khaadi Kurta (Left) can be seen as the final product is packed to send to its final destination. 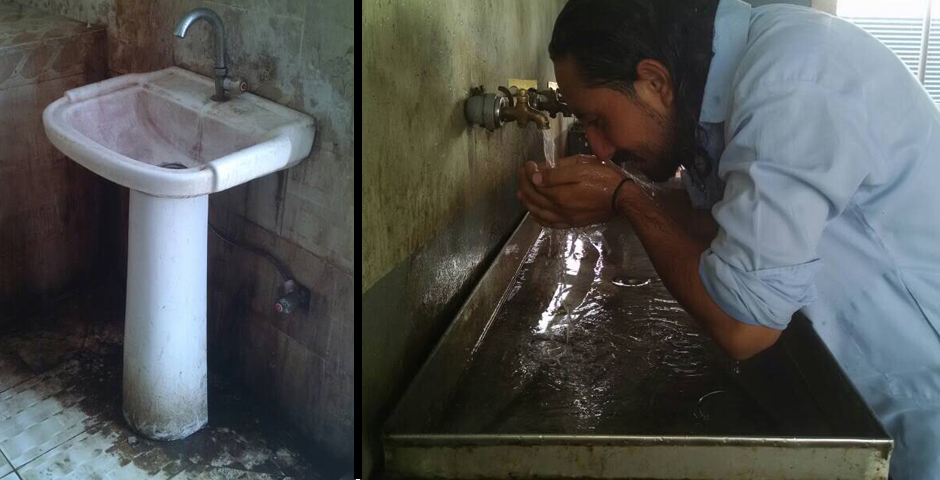 Pictures show the places the Khaadi workers use water from. 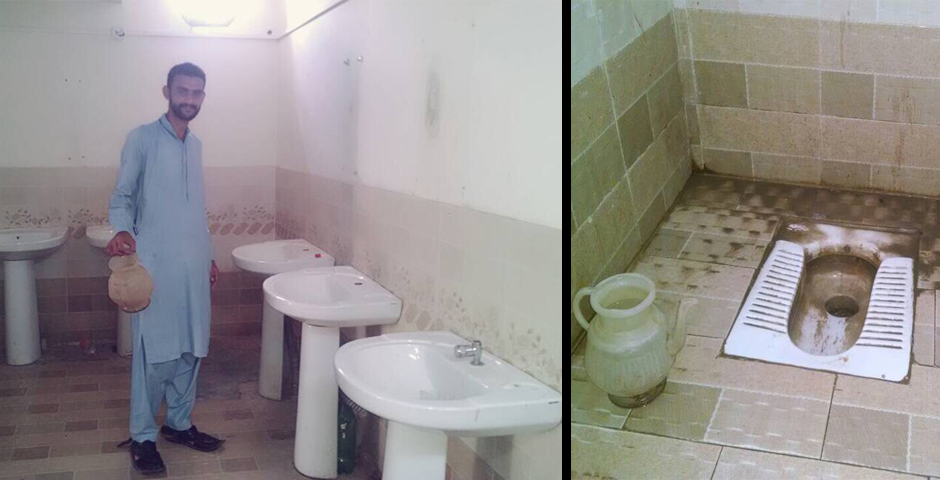 Washbasins outside the toilets neither have taps on them nor water supply.

Sources within the company revealed that the unit, which employees over 1,500 workers, is devoid of basic facilities for workers. They claimed that there are only three functional bathrooms and that too on the fifth floor. Workers get only five minutes to climb the top floor, use the bathroom, and get back to work.  They cannot take a bathroom break more than twice a day.

There is only one functional washbasin for workers to wash their hands, and two taps to drink water from. Further, the environment has been described as unhygienic. 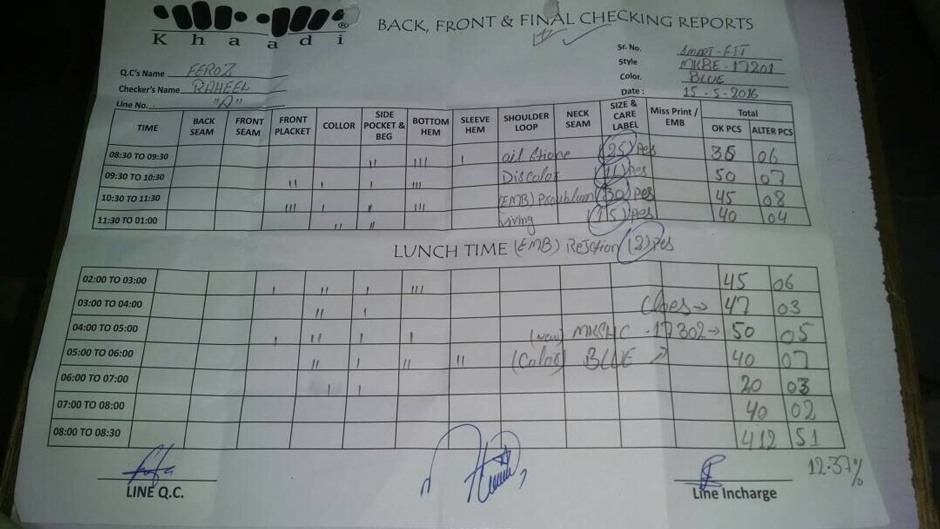 The production target sheet which the workers have to fill. It has a Khaadi logo as their supervisors manage the production unit contrary to their claim that it’s Tex Mark, a vendor, which makes clothes for them.