Kuwait's emir had an import­ant role in a previo­us Gulf rift in 2014
By Reuters
Published: June 6, 2017
Tweet Email 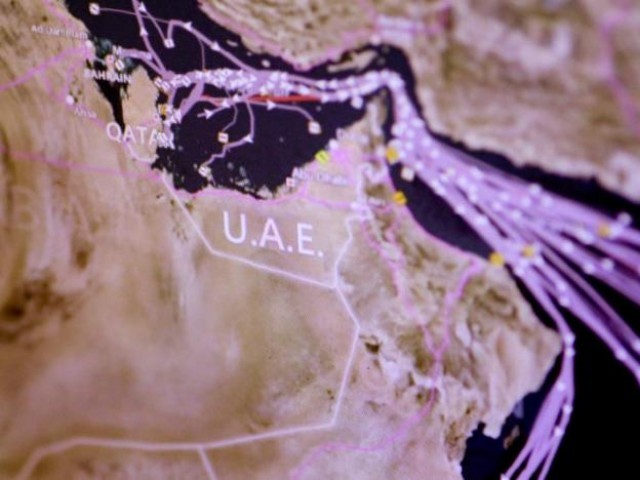 An Eikon ship-tracking screen shows tanker traffic around Qatar over the last seven days in this June 6, 2017. PHOTO: REUTERS

Qatar’s foreign minister said on Tuesday Doha was ready for mediation efforts after the Arab world’s biggest powers severed ties with it, adding that Qatar’s ruler had delayed a speech in order to give Kuwait a chance to ease regional tensions.

Saudi Arabia, Egypt, the United Arab Emirates and Bahrain severed diplomatic relations with Qatar in a coordinated move on Monday. Yemen, Libya’s eastern-based government and the Maldives joined later and transport links were shut down.

Sheikh Tamim bin Hamad Al-Thani spoke by telephone overnight with his counterpart in Kuwait, which has maintained diplomatic ties with Qatar, and decided to postpone a speech to the Qatari people as requested. Doha also decided not to retaliate against the measures.

Qatar wants to give Kuwait’s Sheikh Sabah Al-Ahmad Al-Jaber al-Sabah the ability to “proceed and communicate with the parties to the crisis and to try to contain the issue,” Sheikh Mohammed bin Abdulrahman al-Thani said in comments to Qatar-based Al Jazeera television.

Kuwait’s emir had an important role in a previous Gulf rift in 2014 and Qatar’s Sheikh Tamim “regards him as a parent and respects his desire to postpone any speech or step until there is a clearer picture of the crisis,” Al Jazeera quoted the foreign minister as saying.

Sheikh Mohammed told the channel that the measures taken against Qatar had an “unprecedented impact” on its citizens and on family relations in the Gulf Arab region, but said Doha will not take counter measures.

Qatar “believes such differences between sister countries must be resolved through dialogue.”