When all roads were leadin­g to Mohali, we were creati­ng our own inroad­s toward­s a deep friend­ship.
By Hani Taha
Published: April 4, 2011
Tweet Email 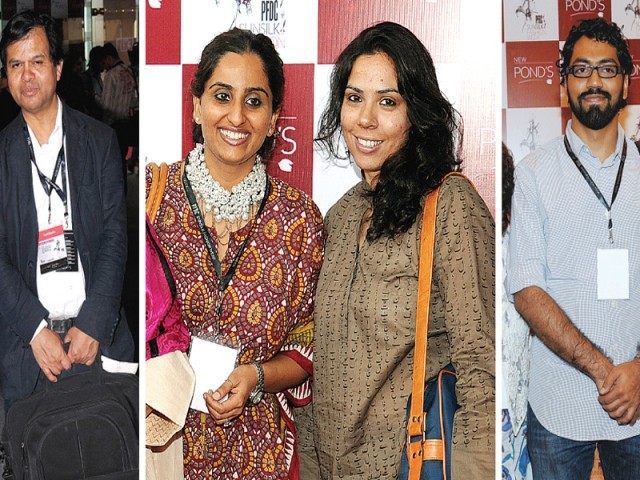 The atmosphere was electrifying when this little coterie of journalists arrived from India at the apogee of the epic Indo-Pak match — a memory that we now wish to forever banish from the deepest recesses of our mind.

So sure we were of our win, that days prior to the match we had managed to intimidate the Indian fashion media in attendance, for whom, for the first few days since their arrival, fashion was all forgotten in the ebbing passion for cricket.

“We have great players, but there’s no cohesion like you guys have, you are a team,” she assured me repeatedly, stating that there really is no competition and that victory was ours. And while March 30 was a day we had jokingly decided not to meet, since we were enemies on the field, I took Raina all the way across to the inner city to marvel at the eclectic magnificence of Cuccoo’s Cafe, admist Lahore’s maddening traffic.

When all roads were leading to Mohali, we were creating our own inroads towards a deep friendship.

After several trips to Liberty Market and Anarkali, the conclusion was that “the shopping isn’t as great as Karachi,” spoke Raina candidly, but sighed that, “Lahore is a beautiful place to enjoy food and friends and just be at peace at oneself, and soak in the culture. It has a lot of the old city charm.”

In the quest for some culture but just when the match was about to begin, Elle India’s Chinmayaee Manjunath and her husband, Aman Khanna of the Times of India, were searching for an ‘auto’ to head out exploring a local rustic café; snapping away at trucks to capture Pakistan’s famed and unique truck art and immortalising scenes of peaceful coexistence of the Gurdwara and Badshahi Mosque in the inner city. “I love the truck art here,” spoke Manjunath. “It’s just fabulous! Being in Lahore on the day of the match makes me so aware of Lahori hospitality. We watched the match with two families and had a wonderful time. And at the end of it, people were congratulating us warmly, which was touching. Most of all, I think it reminded me of our shared heritage and history, and made me aware of how deep the ties between the two countries run” she said.

While it was a bitter pill to swallow, even for a non-cricket crazed fan like myself, the match was all the more exciting because those we were competing with were amongst us. As a gesture of peace and support for Pakistan, Amit Roy, a senior journalist who has worked prolifically and written for The Telegraph as well, wore a green tie every day to the fashion week. “I was quite upset actually that Pakistan lost,” he lamented. “It would have been a great victory for the country.” And if anyone thought Roy was just being a gracious guest, he dispelled the thought by stating something as profound and controversial as suggesting a breakdown of the borders! “I firmly believe that we should abolish the need for visas between the two countries,” stated Roy adding that art and cultural activities, such as the fashion week, should be encouraged between the countries to neutralise the negativity that the nations may feel towards each other. He was especially keen on generating a flow of young journalists across the border to experience, what he calls, “the astonishing beauty of Pakistan.”  As a journalist who has done immense work on Indo-Pak issues, Roy aptly identified fashion as a starting point towards building bridges.  “Fashion should be used as a tool of soft power by Pakistan,” said Roy perceptively. “Pakistan has great fabric and makes exquisite clothes; combining that with how beautiful Pakistani women are, makes it a great package that has great potential to completely over turn the stereotypes that people have of the country.”

Coming to Lahore for some like Khanna, was a homecoming of sorts — his family hails from this historic city. And with a keen sense of the camera, he was able to detect and capture how “India is such a part of people’s consciousness here. The whole cityscape is identical to that of Delhi or Mumbai, but although Delhi and Lahore share the Punjabi character, there is gentleness in the city that is amiss in the aggressiveness of Delhi,” Khanna pointed out. “The warmth and hospitality even from people we don’t know has really touched us as well as a unique ownership that everyone here has for the city of Lahore”, added Khanna’s wife who was bowled over by Saieen Zahoor’s performance at Peeru’s Cafe, arranged especially for the international media by the fashion council. “There was such divinity in his performance”, she spoke wistfully.

Hosting the PFDC Sunsilk fashion week in its home town, made it possible for this otherwise esoteric event, to have far reaching effects on cultural exchange and growth than just being a fashion and business event, a feat that the council could not have achieved in Karachi with its cosmopolitan character. In spite of the fact that the council in an effort to remain fair to both cities, has once again announced that it will return to the city by the sea for its second biannual round in November. It is perhaps wiser to stay rooted to the historic and cultural city of Lahore where they can deliver a more wholesome Pakistani experience to their foreign guests.

‘I couldn’t sleep for three nights’