Growing ties with Pakistan will not affect relationship with India: Putin

Growing ties with Pakistan will not affect relationship with India: Putin 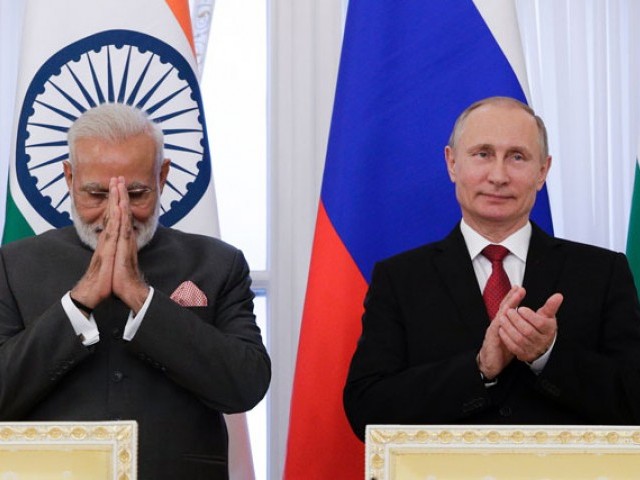 “There is no other country in the world with which Russia has such ‘deep cooperation’ in delicate areas including missile technology, and its benefits from cooperation with India,” Putin told Press Trust of India during an exclusive interaction.

The Russian president, however, sidestepped a question on Indian-occupied Kashmir (IOK) saying, “it is up to you to assess whether Pakistan is fuelling terror” in the disputed region. “But no matter where the threat comes, it is unacceptable and we will always support India in its fight against terrorism,” he added.

Claiming that Russia does not have any ‘tight’ military relationship with Pakistan, Putin said just because Moscow has a “special relationship” with New Delhi, it does not mean India should be restricted in having contacts with other “partnering countries”. “This is ridiculous.”

“I don’t think we should push figures here in our military cooperation because it has an unprecedented level in its volume and quality. (But) there is no other country in the world that we have such deep cooperation in delicate areas such as missiles, and we benefit with cooperation with India. And this results from our trust-based relations with India,” he said.

Responding a question if Russia will use its influence to get Pakistan to stop alleged attacks in IoK, he said, “We will always support Indian in its fight against terrorism. I believe Pakistan is taking immense steps to stabilise the situation in the country.”

Russia and India enjoyed a decades-long alliance forged during the Cold War, when the Soviet Union was New Delhi’s largest trading partner, diplomatic ally and main arms supplier, providing everything from tanks to aircraft. But the relationship became unmoored following the collapse of the USSR, as India underwent an economic transformation and increasingly sought to build trade ties with Western nations.

That process has accelerated in recent years as New Delhi has orbited closer to Washington, and Russia has fostered relationships with India’s chief regional rivals Pakistan and China.

This article originally appeared on PTI