Finance Minister Ishaq Dar sounded a confident man as he announced Pakistan’s Gross Domestic Product (GDP) grew 5.28% in fiscal year 2016-17 (FY17), against a target of 5.7%, adding that the government had managed to reduce the fiscal deficit to 4.2%.

“This year, the deficit would amount to 4.2%,” said Dar as he formally launched the Economic Survey 2016-17 on Thursday.

Fiscal deficit stood at 8.2% in 2012-13. However, what Dar did not mention was the amount of circular debt that was wiped off when the ruling Pakistan Muslim League-Nawaz (PML-N) came into power. The amount has now gone up to over Rs350 billion in the last four years.

“We won’t need to go to the IMF till 2019. Our home-grown industries will be able to help us.”

Pakistan will also be part of the G20, said Dar, adding that the size of the country’s economy would surpass that of Canada, Italy and South Korea by 2050.

The finance minister also announced a package of Rs100 billion for the rehabilitation of internally displaced persons (IDPs) and reconstruction of infrastructure in the northern areas. Dar said the amount would be part of the budget measures to be announced on Friday. 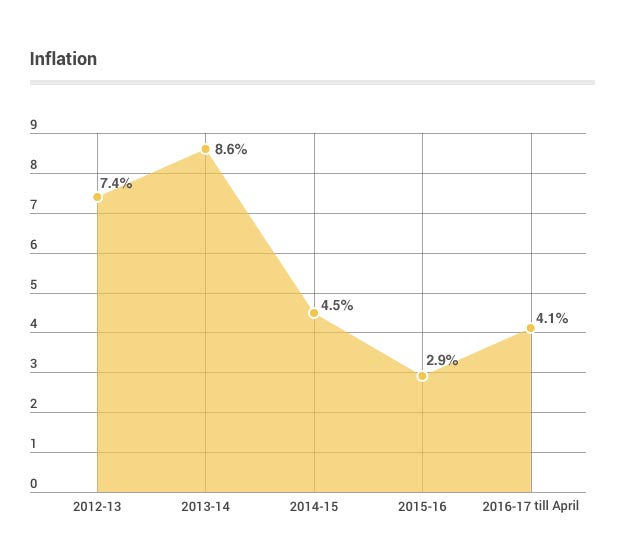 “This year’s growth rate is the highest in 10 years,” the finance minister added. “A 3.4% increase has been recorded in electricity, gas supply in the existing fiscal year.”

Claiming that the country’s economy has surpassed $300 billion, the finance minister said growth rate for next fiscal year has been set over 6%. “GDP growth in Pakistan is being acknowledged at the international level,” he upheld.

Referring to public debt, a source of constant criticism for the government, Dar said the ratio had reduced from the level in 2012-13.

Dar said the current account deficit, a new source of worry for economic managers, is estimated to widen to $8.3 billion by the end of the outgoing fiscal year. The amount stood at $2.5 billion in the previous fiscal year, a staggering increase that Dar attributed to import of China-Pakistan Economic Corridor (CPEC) projects-related machinery.

He said the import of heavy machinery surged 70%, textile sector showed a 23% increase while the construction (67%) and agriculture (37%) were also responsible for the increasing import bill.

The finance minister will present the budget for the next fiscal year in the National Assembly on Friday whereas a session of the Senate will also be held at the Parliament House in Islamabad on the same day.

Prime Minister Nawaz Sharif had already approved the Gross Domestic Product (GDP) target at 6% during a meeting of the National Economic Council (NEC) on May 19.

The NEC also approved the country’s consolidated development budget of Rs2.5 trillion for the upcoming financial year (2017-18), the highest increase in the overall national outlay as Pakistan undertakes massive infrastructural developments plans due to CPEC.