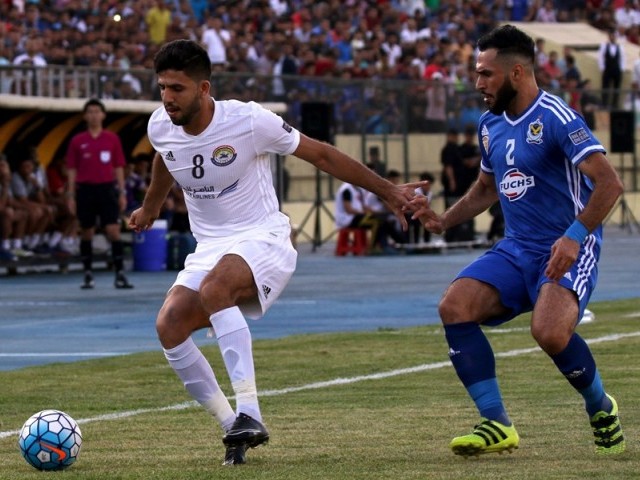 Al-Zawraa player Mohannad Abdulraheem (L) vies for the ball against Air Force player Samal Saeed during their AFC Cup West Zonal semi-final football match in Arbil, the capital of the Kurdish autonomous region in northern Iraq, on May 22, 2017. PHOTO: AFP

ARBIL: Ali, a jubilant 24-year-old, is finally in the stands himself for an international football match in Iraq — the first to be held in the country in years.

“Before, I watched these matches on TV. Today I’m at the stadium,” says Ali, wearing an Air Force Club jersey and a flag bearing the team’s falcon emblem around his neck.

The match between the Air Force and Al-Zawraa clubs — part of the Asian Football Confederation (AFC) Cup, which the former team won last year — marks the return of international play to football-crazed Iraq for the first time since 2013.

“Football is our oxygen — we breathe football,” says Ali.

The law student came by bus along with other fans to the Kurdish regional capital Arbil, where the two teams drew 1-1 in front of a crowd of 11,500 people. “I would have liked it to be in Baghdad, but that’s how it is. We’re so happy,” says Ali.

Arbil and other areas of Iraqi Kurdistan have largely been spared the years of brutal bloodshed that have plagued other parts of Iraq.

Iraqis’ passion for football cuts across the deep religious and political divisions that have fuelled horrific violence in the country for years, and the country’s national teams have brought people together amid some of the worst of the unrest.

But world football’s governing body FIFA and the AFC have periodically banned Iraq from hosting international matches, most recently in 2013 after a coach was killed by security forces.

Violence was rising, part of a multi-year crescendo of bloodshed that culminated in the Islamic State group’s takeover of large areas north and west of Baghdad the following summer.

Among the targets of frequent jihadist attacks in 2013 were football pitches where Iraqi children played the sport and cafes broadcasting matches.

At the stadium in Arbil, soldiers patrol and security is tight for a match that is a test of Iraq’s ability to host such events, and which comes during a three-month FIFA-imposed probation period for the country.

In the stands, fans jump, sing and scream, with Air Force supporters and their deafening vuvuzelas winning the battle of decibels.

“The heart is mine but what makes it beat is Al-Zawraa,” proclaims one of their flags.

“We have a responsibility, we the public,” says Ahmed Abdullah, another fan of Al-Zawraa.

He came from Baghdad on one of 15 buses chartered by the club. “We are so happy, even if it’s far away,” he says, while adding that the ban on international play in Baghdad should be lifted because “it will not always be possible to come this far”.

It is a common sentiment among fans: they want the ban on matches being held elsewhere in the country to be lifted. “The public is thirsty for matches like this,” says Ali Fadel, a 50-year-old taxi driver.

Founded in 1931, Air Force is the oldest club in Iraq and the current holder if the AFC title, while Al-Zawraa, with 12 Iraqi league championships, is the most titled team in the country.