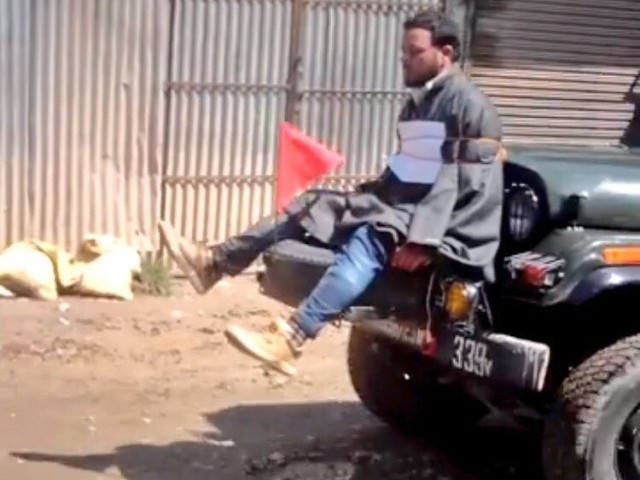 An Indian army major who tied a Kashmiri youth to the bonnet of a jeep as a ‘human shield’ against stone-pelting protesters has bee awarded a military honour, The Times of India reported.

The officer was awarded by Indian Army chief Gen Bipin Rawat during his recent visit to the held Kashmir.

Earlier today, veteran Bollywood actor and lawmaker Paresh Rawal caused outrage after saying author and activist Arundhati Roy should be tied to an army jeep and used as a human shield.

Major Gogoi of the 53 Rashtriya Rifles was in the spotlight after a video, shot during the April 9 Srinagar Lok Sabha by-poll and posted on social media, showed a man tied on the bonnet of an army jeep in Badgam. The video went viral and drew anger and condemnation.

An investigation by the police, which lodged an FIR against the security forces in light of the incident, revealed that Gogoi had tied the man to the jeep’s bonnet as a human shield.

A Court of Inquiry instituted against the major has yet to hand in a report on its findings.

Last week, Defence Minister Arun Jaitley had expressed his support for Gogoi’s actions and said it was the officer’s responsibility to save the lives of those involved in the by-election that day as well as the crowd that had gathered.

Taking notice of the inhuman incident, former Chief Minister of Indian-held Kashmir, Omar Abdullah expressed his shock on Twitter. “This young man was TIED to the front of an army jeep to make sure no stones were thrown at the jeep? This is just so shocking!!!!,” he said while sharing the video:

Here's the video as well. A warning can be heard saying stone pelters will meet this fate. This requires an urgent inquiry & follow up NOW!! pic.twitter.com/qj1rnCVazn