Activists take to the streets in remembrance of slain Gwadar labourers

Activists take to the streets in remembrance of slain Gwadar labourers

The labour­ers were killed by gunmen while workin­g on a CPEC-linked road projec­t
By Photo: Ayesha Mir / SHEHARYAR ALI
Published: May 16, 2017
Tweet Email 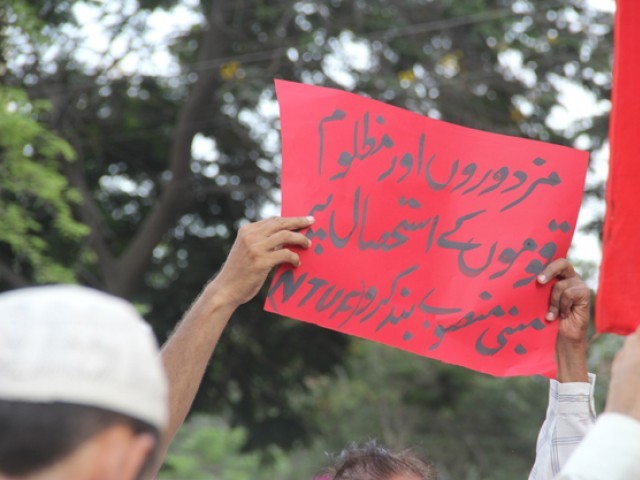 KARACHI: Ten labourers working on a China-Pakistan Economic Corridor (CPEC) linked road project were killed by armed assailants on Saturday at two separate sites in Pishukan and Ganz areas, some 20 kilometres away from Gwadar.

Nine of the 10 labourers belonged to Haji Muhammad Siddiq Lakho village in Sindh’s Naushero Feroz, while one was a local.

To pay tribute to the deceased labourers, the National Trade Union Federation (NTUF) organised a protest on Monday outside the Karachi Press Club.

Participants of the protest were armed with placards that read ‘Qaatilon Jawab Do, Khoon Ka Hisab do [Murderers answer us, account for the blood]’, while slogans were also chanted against the government for not providing adequate security to the labourers.

Addressing the protest, NTUF President Rafiq Baloch termed the act an ‘attack on all oppressed communities in the country’. He said it was based on the labourers’ ethnicity and called it an ‘inhumane act by terrorists’.

Besides the perpetrators of the attack, the authorities and employers were equally responsible for the incident, as they failed to ensure the labourers’ security, he accused.

“A local contractor, Dur Muhammad, should also be held accountable, as he had hired the construction labourers on contract. The workers were earning daily wages from the work,” he explained.

Lamenting over the incident, the NTUF president said that the killing of poor laborers was beyond his comprehension, as they were not employed by a state-owned enterprise nor were they working on a disputed project.

Criticising political and religious parties for their silence on the issue, NTUF Balochistan President Bashir Mehmoodani said that it is clear that all these parties have their own interests, which is why they have closed their eyes to the issue, where ultimately the poor are suffering.

“It is highly alarming that workers have been exploited in the name of prosperity-promising projects like CPEC and others,” he said. The rally ended with a consensus on a set of demands. NTUF Deputy General Secretary Nasir Mansoor said the government should ensure adequate security for labourers and pointed out that of the slain labourers four were children, which is against the law. He demanded that the government not involve child labour in any future projects.

Workplace safety should be provided to workers at any cost, participants of the rally said, adding that the workers should be registered with social security institutions, be given pension funds and all labour laws should be implemented.