Baloch­istan Emerge­ncy Centre coordi­nator says one case each report­ed from Gilgit-Baltis­tan and Punjab so far in 2017
By Our Correspondents
Published: May 15, 2017
Tweet Email 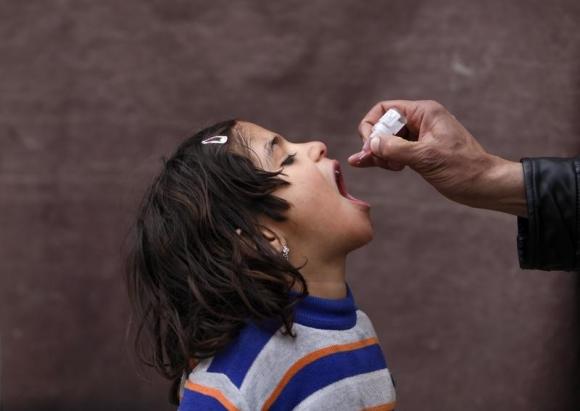 Balochistan Emergency Centre coordinator says one case each reported from Gilgit-Baltistan and Punjab so far in 2017. PHOTO: REUTERS/FILE

PESHAWAR/QUETTA: Three-day anti-polio campaigns will kick off from today (Monday) in Federally Administered Tribal Areas (Fata), Khyber-Pakhtunkhwa (K-P) and Balochistan. Children with deficiency will also be given vitamin A capsules during the drive.

In Fata, a total of 1.04 million children, under the age of five, will be vaccinated with oral polio vaccine through 4,272 vaccination teams, comprising 3,889 mobile, 282 fixed and 101 transit teams.

In K-P, around 5.6 million children will be vaccinated against the crippling virus.

The campaign will also be carried out in 74 camps set up for displaced persons as well as Afghan nationals where some 20,000 teams will be vaccinating kids.

The polio immunisation campaign will be held in 30 districts of Balochistan.

The campaign has been initiated in Fata with the support of law enforcing agencies (LEAs) under the supervision of the political administration. Police and LEAs will be providing security to the teams in K-P and Balochistan.

The campaigns will continue from May 15 to 17, 2017 followed by a catch-up drive for the children missed.

Expressing satisfaction over the quality of polio campaigns initiated in 2017, K-P Governor Engineer Iqbal Zafar Jhagra stressed upon sustaining the progress achieved by the programme being run in Fata.

He appreciated the efforts of the emergency operation centre (EOC), civil-political administration, agency health teams and particularly the front line workers in keeping Fata polio-free in 2017.

A statement issued by the Fata Secretariat quoted the governor as saying, “No polio case in Fata over the last 10 months signifies the kind of quality work that the polio teams are doing in this highly-challenging situation.”

He urged the administration and polio teams to ensure that the campaign maintains the same progressive rhythm in May, like it did in the previous months.

Agency health teams and Fata’s EOC have chalked out monitoring plans through which each step of the campaign would be duly monitored and supervised. The campaign, as usual, would be evaluated through independent and neutral monitors.

He said, “We have achieved much and need to continue the persistent efforts to reach the finish line, which is now very much in sight.”

During this campaign children will also be given vitamin A capsules to overcome deficiency, he said, adding that polio teams will also be utilised to administer vitamin A to children from the age of six months to five years in Fata’s agencies.

Ahmed shared these views during a presser in his office with religious leaders and paramedics’ staff.

Commenting on the security arrangements, he said Balochistan Levies, police and Frontier Corps have been deployed for the security of polio workers.

“Only one group of paramedics is on strike, while all others are on board,” said the coordinator.

Ahmed said Pakistan, Afghanistan and Nigeria are the only countries where polio still exists.

The coordinator said one case each had been reported from Gilgit-Baltistan and Punjab, while no case was reported in Balochistan so far in 2017.

Talking about the families travelling from hot regions in the country to Balochistan, he said transit points will be given special attention for such people.

Ahmed said along with the administration of polio drops, inoculation of children is also essential to protect them from other dangerous diseases and improve their immunity.

He said the services of the community health workers have also been taken and the help of tribal notables and Ulema is also sought in this regard. He vowed not to rest until the menace of polio had been eradicated.