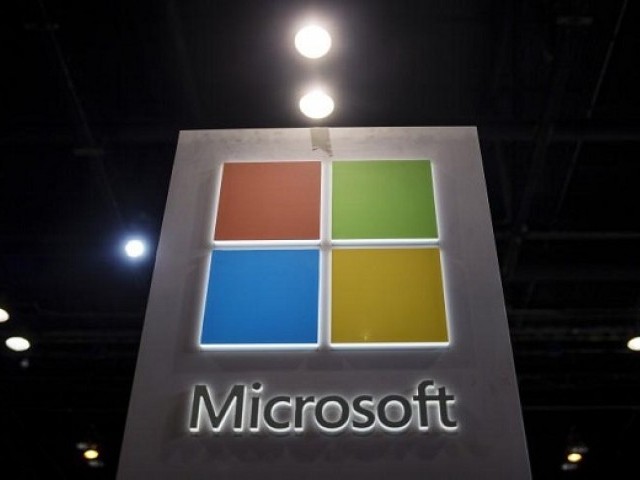 The Microsoft logo is seen as part of a display at the Microsoft Ignite technology conference in Chicago, Illinois, May 4, 2015. PHOTO: REUTERS

Microsoft on Thursday unveiled a forthcoming Windows update aimed at keeping its desktop and laptop computers at the heart of lifestyles increasing reliant on smartphones.

Enhancements to the widely used operating system to roll out later this year are designed to make applications built on Microsoft technology work more harmoniously across an array of internet-linked devices, according to demonstrations given at the company’s Build developers conference in Seattle.

One key addition of the Windows 10 Fall update will allow people to leave what they are doing on one device and pick up where they left off on another — be it a Windows, Apple, or Android driven machine.

Activities or files will be shifted about using cloud storage service OneDrive and artificial intelligence.

Windows 10 will be able to integrate with a wide range of devices, including smartphones, tablets and virtual or augmented reality gear, executives said.

“Microsoft essentially has fully embraced the usage model of moving between phone, tablet, PC, Mac, game console and in the future AR and VR headsets, regardless of the operating system,” Patrick Moorhead, a principal analyst for Moor Insights and Strategy, told AFP.

“If it works as well as the demos suggest, it will be successful because the reality is, we live in a heterogeneous world of Windows, Android and iOS.”

The update would be optimal if Microsoft had a pervasive mobile operating system, but the US technology giant saw Windows smartphones eclipsed by Apple and Android devices, the analyst noted.

The update “is a recognition that the vast majority of their customers are using Android and iOS (Apple) devices on mobile and they have to accommodate that,” Ross Rubin, a Reticle Research analyst, told AFP.

Microsoft Windows can be hacked with a single unread email: Google

“As Microsoft moves to more of a services model, they need to accommodate platform choice; it is just not a Windows world.”

Gartner analyst Jason Wong said the upcoming Windows update still reflected a view that desktop or laptop computers remained at the center of people’s lives — which he said is not the case.

Microsoft has held firm that it has not given up on the mobile market, but in the interim is updating Windows to remain relevant in a smartphone-centric world, according to Rubin.

Better tuning Windows-powered computers to mobile devices could also serve as a “bridge” to what is being heralded as the next big computing platform — mixed reality infused with artificial intelligence, the analyst said.

Microsoft is aggressively creating a mixed reality technology platform and HoloLens augmented reality gear, which Windows 10 is crafted to support.