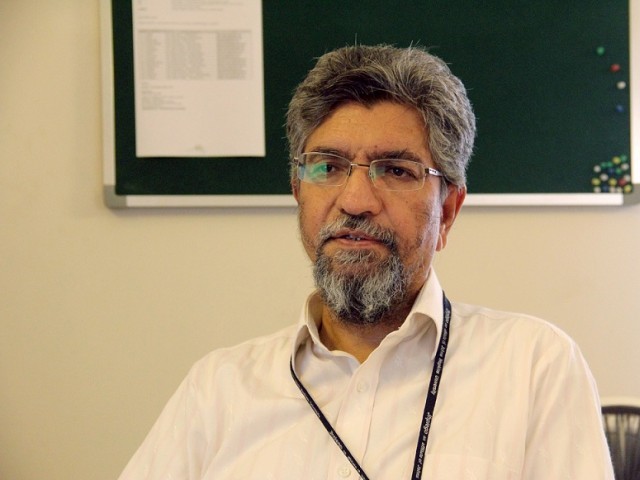 Dr Farid Midhet says that the doctors here don't have the required skills to save the lives of newborns and mothers during pregnancies and deliveries. PHOTO: AYESHA MIR

KARACHI: It is a known fact that child mortality rate in Pakistan is highest in the region, worse than Nepal and Bangladesh. However, the experts believe that introducing basic techniques in health sector can reduce this and save precious lives of mothers and their newborns.

An international health organisation called Jhpiego, which is associated with Johns Hopkins University, is one of the many non-governmental organisations that are working side by side with the government to bring the health indicators at par to the international standards.

“The doctors [here] don’t have the required skills that are needed to be provided during pregnancies and deliveries to save the lives of the newborns and mothers, especially during family planning,” said Jhpiego country director Dr Farid Midhet, while speaking to The Express Tribune. He added that the local doctors are given training by the organisation to incorporate new techniques that are required to help improve the health indicators.

Referring to some of the old techniques that are used by some of the doctors, Dr Midhet said that when a baby is born the doctors start spanking the baby to stimulate him or her to take the first breath. According to him, this can be risky and can damage the brain of the child.

However, he said, they provide trainings and technical assistance to the doctors to use small pumps to make the babies start breathing or else they can die. “You have just one minute to save that baby, which is a golden minute to save the newborn from lack of breathing,” he said. Dr Midhet believes such modern techniques can be used to save the lives of babies.

“We have so far trained 700 doctors to use the technique of using pumps rather than resorting to old techniques and have saved 800 lives of babies so far,” he claimed, adding that this technique is 98% successful.

USAID vows to continue to support people of Sindh

“Our organisation has achieved a lot so far in the sense that such small techniques have saved lives of mothers and newborn babies during deliveries,” Dr Midhet said, while speaking about the success of Jhpiego. He added that the organisation has trained doctors on how to prevent causing infections by using modern and basic methods, such as cleaning instruments.

Dr Midhet added that 20% babies die due to an infection called septicaemia. According to him, when the doctors cut the umbilical cord of the newborn baby, sometimes the cord gets infected. He added that this can lead to the death of the baby due to blood poisoning caused by bacteria or their toxins.

However, by introducing simple technique of applying chlorhexidine gel on the cord can reduce the neonatal mortality and sepsis, he said, adding that 2 million babies in the country have been provided with this gel so far.

Malnutrition in Sindh: Over 57% children under-5 stunted

According to Dr Midhet, 30% of the women die during pregnancy and deliveries, usually caused by brain hemorrhage called postpartum hemorrhage. He added that three tablets of misoprostol, which are worth Rs27, can save the life of the mother during delivery and they continuously create awareness among the doctors about this.

Besides this, he said, the government also approached Jhpiego to improve immunisation status in eight districts of Sindh. “In less than a year, the immunisation status has increased from 20% to 66%,” Dr Midhet. He added that this was achieved by building a system to ensure that vaccinators visit the villages and technical assistance was provided to the government vaccinators. He was the opinion that the local NGOs play the role of mobilizing the local community and villages, whereas, international NGOs bring international experience with them.