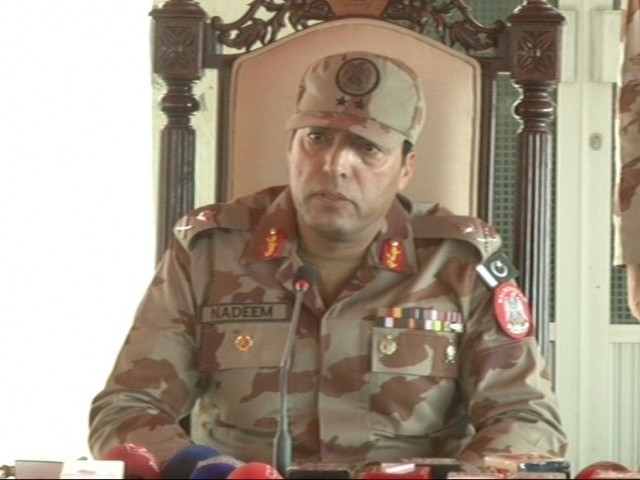 “At least 50 Afghan soldiers were killed and more than 100 injured after Pakistan retaliated to Afghan forces’ assault on Friday when our census team came under attack near zero-line,” the Frontier Corps (FC) Inspector General Major General Nadeem Anjum told newsmen in Chaman on Sunday.

Eleven people, including women, children and a FC man, were killed and 47 injured when Afghan border forces resorted to ‘unprovoked’ firing at Pakistani troops guarding a census team.

The incident occurred in the Killi Luqman and Killi Jahangir villages of Chaman, which straddle the border and have been a source of controversy between Afghanistan and Pakistan. Kabul claims the villages are part of the war-torn country’s Spin Boldak district, an assertion Pakistan flatly denies.

“Afghan forces had attacked civilian population but we targeted Afghan border guards’ check posts,” the FC director general said, adding:  “We are not happy in striking against Afghan brothers but we have to give them a strong message regarding border violation.”

Commander Southern Command Lieutenant General Aamir Riaz also visited the border town on Sunday as he vowed that the Pakistan Army would not compromise on Pakistan’s territorial rights and continue to deal with ‘armed intruders’ severely.

“Afghans have been given a befitting reply for their mischief. The international border at Chaman will remain closed for an indefinite period until the Afghan government and its forces change their attitude towards Pakistan and its people,” Lt Gen Raiz said while addressing media and tribal elders.

The corps commander said Pakistan was not happy over the casualties of the Afghan forces as they are ‘our Muslim brothers,’ but warned that all armed intruders would meet the same fate.

He inspected the forward positions of the defence forces at the border where officers concerned briefed him on the situation in detail. He also offered Fateha for the martyred and visited Chaman’s District Headquarters Hospital to inquire after the health of the injured persons.

Lt Gen Riaz expressed his complete satisfaction over the performance of the defence forces.

“The army and other security forces are enjoying complete support and confidence of the people of Pakistan and will continue to face future challenges with utmost dignity and integrity,” he added.

The situation remained tense in the border town as the Friendship Gate between the two countries remained closed for the third straight day.

Evacuation of people from some border villages also continued due to security situation. “About 15,000 people had to leave their homes as a result of indiscriminate firing and shelling by the Afghan forces,” Qila Abdullah Deputy Commissioner Qaiser Khan Nasir told the press.

He said the government had established a tent village in the foothills of Khojak Pass – far away from the international border to keep internally displaced persons.

The security officials had instructed all the truck drivers and vehicle owners to remove their vehicles from the dangerous border area and clear the place at the earliest.

The closure of border crossing has suspended all trade and business activities. Supplies to Nato forces stationed in Afghanistan has also suffered because of the sudden and unannounced closure of the Friendship Gate.

Meanwhile, security officials continued their consultation with the tribal elders and elite of the area on border management.  They briefed the elders about procedure for checking of documents of people crossing the international frontier at the exit point and timings of the post.