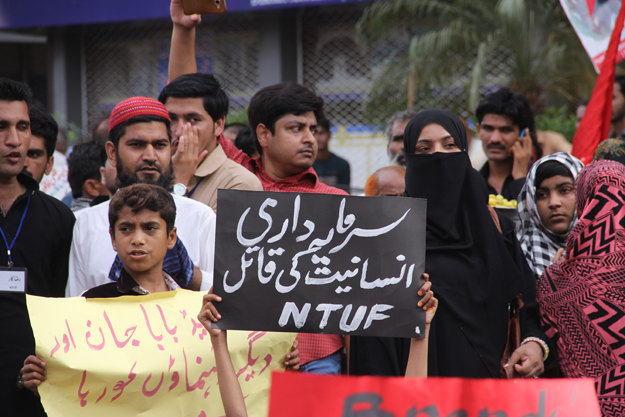 Workers from different industries congregated outside the Karachi Press Club to fight for their rights. PHOTO: AYESHA MIR/EXPRESS

KARACHI: Workers belonging to different sectors took to the streets on Monday to mark International Labour Day, while some of their colleagues did not deviate from their daily routines in order to earn bread for their families.

A rally organised by the National Trade Union Federation (NTUF) and Home Based Women Workers Association was held from Regal Chowk to the Karachi Press Club in Saddar.

The majority of the participants of the rally were factory workers who, on their holiday, decided to attend the event in a bid to express solidarity with their comrades from Chicago who were killed in 1886.

Along with them, the families of the victims of the Baldia factory fire and Gadani oil tanker tragedy were also present, refreshing their vows to continue their struggle against workers’ exploitation in Pakistan.

Of blood and sweat: The shoulders that bear the economy’s burden

Leading the rally was NTUF President Rafiq Baloch, who said that by an organised struggle workers can wipe out the unjust, class-based system that was oppressing them.

He said that more than 60 million workers in the country were deprived of their due rights and were not allowed to form unions at their workplaces. “A union is considered a forbidden fruit and when workers near it, they are persecuted,” he lamented. 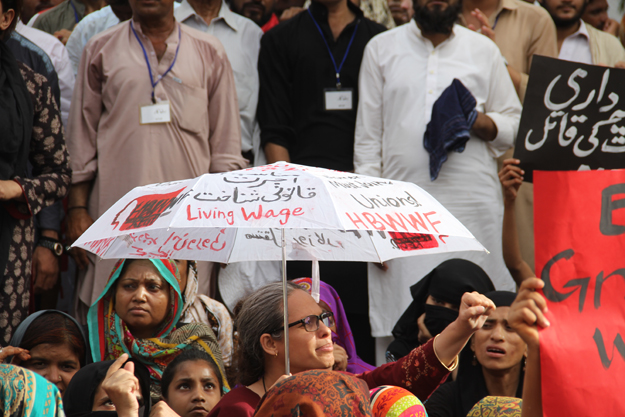 Workers came out to fight for their rights and spread awareness of their plight. PHOTO: AYESHA MIR/EXPRESS

He said in 90% of companies across the country, workers were forced to work beyond the eight-hour shift and were not even paid minimum wage. “This is also a violation of basic human rights but authorities seem unbothered,” he said.

“Getting registered with social security institutions and pension funds was the first right of a worker, but most of the companies never did that. They did not even issue employment letters to their workers,” complained Baloch.

Bashir Mehmoodani – a Shahenshah on a mission

Citing examples of the 2012 Baldia factory fire and 2016 Gadani oil tanker tragedy, he said that such disasters occurred when employers put their workers lives at stake just to save a few rupees. “The greed of capitalists is insatiable,” he said.

NTUF Deputy General Secretary Nasir Mansoor said that the country was a signatory of several international conventions about ensuring labour rights and improving working conditions, but any implementation of these conventions was limited to paper only. Besides signing the International Labour Organisation’s conventions, the country also held a GSP plus status given by the European Union (EU). He said that with the help of that status the country had special access to EU markets but never bothered to take care of its clauses about workers’ well-being.

He said that the government writ was nowhere to be seen, especially in industries owned by multinationals or influential people. Mansoor said that these companies had made their own security establishments spearheaded by retired military officials to persecute workers in case they resist exploitation.

Meanwhile, hundreds of activists of Pakistan Railways’ ‘Railway Mazdoor Union’ initiated a rally on Monday morning from Cantt Railway Station all the way till the Karachi Press Club.

The rally was led by Railway Mazdoor Union Karachi Division Chairperson Alauddin and advocate of the Supreme Court Umar Farooq. Speaking to The Express Tribune, one of the participants of the rally, Muqadar, said that this was their freedom day and today the condition of labourers is far worse than before. 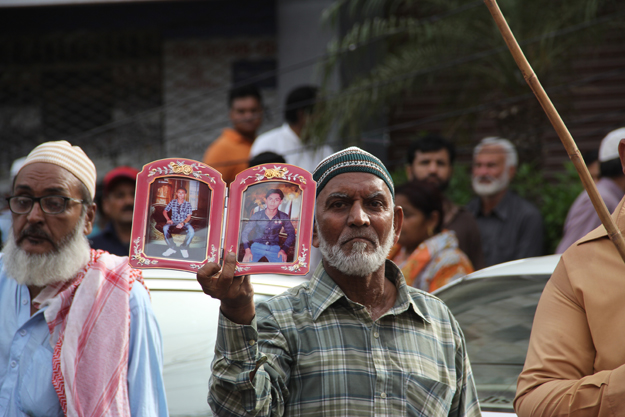 Families of the victims of the Baldia factory fire and Gadani incident were also present at the event. PHOTO: AYESHA MIR/EXPRESS

Workers of Pakistan Railways, he said, are deprived of basic necessities such as health, shelter and education.

Speaking to the rally, Alauddin said that hard-working labourers are forced to live in poverty. The attitude of Hassan Railway Hospital’s doctors with employees of Pakistan Railways, he pointed out is not good and demanded the employees’ salaries be increasing, considering rising inflation rates in the country.

PPP Chairperson Bilawal Bhutto Zardari said that May 1 is the day of workers who snatched their rights through an organised struggle and sacrifice. “This is your success that May 1 is observed as Labour Day all over the world,” he said while addressing a cheque distribution ceremony organised by the labour department’s Worker Welfare Board.

Bilawal said his grandfather, Zulfikar Ali Bhutto, was the first Pakistani leader to declare May 1 a public holiday and also founded the Employees Old Age Benefit (EOBI) institution to protect workers’ rights. He urged the Sindh government to make EOBI and other pension institutions more worker-friendly. He also urged the chief minister to devise a comprehensive labour policy in which all the workers working in different sectors are protected.

The PPP chief also urged the chief minister to seek help of Sindh High Court to make the labour courts more effective. There is dire need to abolish the contract system and provide job security to poor workers, he said.

Organised struggle: Workers from different industries congregated outside the Karachi Press Club to fight for their rights. PHOTOS: AYESHA MIR/EXPRESS

Hyderabad’s fire brigade is going down in flames