Bashir Mehmoodani - a Shahenshah on a mission

Bashir Mehmoodani - a Shahenshah on a mission 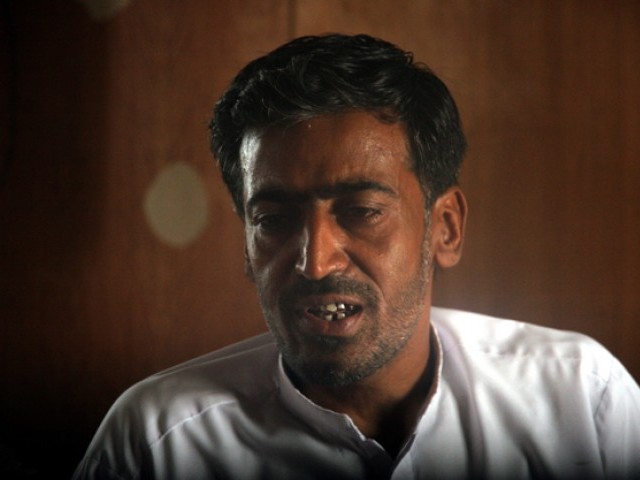 When the workers' movement at the yard had nearly been crushed, it was Bashir who rejuvenated it, claim workers at the Gadani Shipbreaking Yard. PHOTO: ATHAR KHAN/EXPRESS

KARACHI: Not a sound could be heard other than waves crashing on the beach through the spaces between the decommissioned vessels moored at the Gadani Shipbreaking Yard for dismantling and the sound of cranes dropping heavy metal sheets to the ground. The wind blew fiercely, causing the keffiyeh that was around the head and face of Gul Rehman alias Chacha, a veteran welder, to slip and fall to the ground. He bent down to retrieve the item but it blew ahead, his co-workers laughing as he gave chase.

Amid the workers’ growing cheers for Chacha, a metallic grey Suzuki Mehran honked from behind him. He glanced behind with distaste. Just as he was about to hurl profanity at the driver, he stopped and instead yelled something in Balochi, making both the men smile. Chacha resumed his chase of the keffiyeh while the driver lit a cigarette from a pack of Dunhill Lights before stepping out of the vehicle.

The man had a lean figure of five foot and 10 inches. He wore a white-coloured shalwar kameez and black Peshawari sandals. Shading his eyes were a pair of wayfarer sunglasses.

As he walked towards the cheering workers, the wind caused his suit mould to his body, revealing that he was even thinner than he appeared. “Salam,” everyone greeted him respectfully, nodding at his similar reply.

The man is Bashir Mehmoodani, president of the Gadani Shipbreaking Yard Workers Union, who, by his fellows, has been dubbed ‘Shahenshah’, a reference to a character played by Indian veteran actor Amitabh Bachchan in one of his blockbuster Bollywood movies. “In the movie, Shahenshah was a friend of the oppressed, so is Bashir,” revealed Muhammad Boota, a worker hailing from Dera Ghazi Khan.

Word on the beach suggested that Mehmoodani assumed the responsibility of the state when it blatantly failed to fulfil it to ensure that at the most dangerous and arguably the second largest shipbreaking yard in the world, only ships come to die, not men. “When the workers’ movement at the yard had nearly been crushed, it was Bashir who rejuvenated it,” lauded Boota.

Mehmoodani’s story came into limelight from 2006 when he fought a legal battle with Hubco Power Company over workers’ issue but lost. For him, there was no chance to go back to the power plant so he decided to move to another profession. Meanwhile, he remained active in local politics with the Balochistan National Party – Mengal and resolved people’s issue. His fame had nearly gripped town and then in 2009, a man who he knew from before but had never spoken to, asked him for help.

“Tahir Yusufzai, the then general secretary of the workers union, asked me to lead the movement for labourers because he was forced into exile from the district by the authorities,” Mehmoodani told The Express Tribune at his office located off the road running through the yard. The office is made up of wood from the ships. It has no electricity due to recurring power outages. Instead, sunlight that enters the room from a broken window lights it up enough to see faces of the occupants.

The eight-year-long journey that Mehmoodani has covered at the shipbreaking yard as a labour leader narrated an unusual tale of a common man mustering enough courage to cross paths with the far more powerful and wealthy ship-breakers and even richer contractors and enough muscle to bring them to the table for negotiations. “They wouldn’t listen to us as if we, our lives and our families were of no importance. All they cared for was their profit,” he described, narrating his encounters with the employers.

Of blood and sweat: The shoulders that bear the economy’s burden

“The police, the labour department – everyone was on their payroll. They bought even the journalists to stop the news from Gadani from reaching the outside world. A few years back, you wouldn’t hear about workers’ deaths at the yard while it was happening due to lack of safety,” he recalled. “We resisted. We fought with all that we have. It wasn’t simple. We were arrested and booked in false cases. But we stood firm.”

Having given a considerable portion of his life to the workers’ struggle at Gadani, Mehmoodani, who is now 37-years-old, is proud of only one thing, despite the fact that upon close inspection there are many things for him to be proud of. “I am happy that the workers who, in the past, would be afraid of their employers sacking them if they said anything against them, have gained the courage to talk to them eye to eye,” he said.

On November 1, when 26 workers were killed and dozens others wounded in an oil tanker blast in Gadani, it was Mehmoodani who reached the spot before the authorities and guided the workers through a rescue operation on their own. “Everyone panicked and there was a reason,” said Chacha. “No one has seen or heard about such a fire at the yard, which has been working for more than four decades. It was Bashir who organised them and acted like a general in a time of war.”

Almost all the victims of the oil tanker fire have been given compensation – Rs1.5 million to each worker killed – by the employers. This is the first time that relief has been given in a relatively short period of time, unlike previous claims that still remain pending either with the employers or with the government. “In this world, it never goes the way you expect it to. You cannot fight crocodiles in a pond overcrowded by them unless you know the art of fighting,” said Mehmoodani.

‘Resign or we will take our protest to Islamabad’