Low levels of iodine have been report­ed in other Europe­an countr­ies such as Icelan­d and Switze­rland.
By AFP
Published: March 29, 2011
Tweet Email 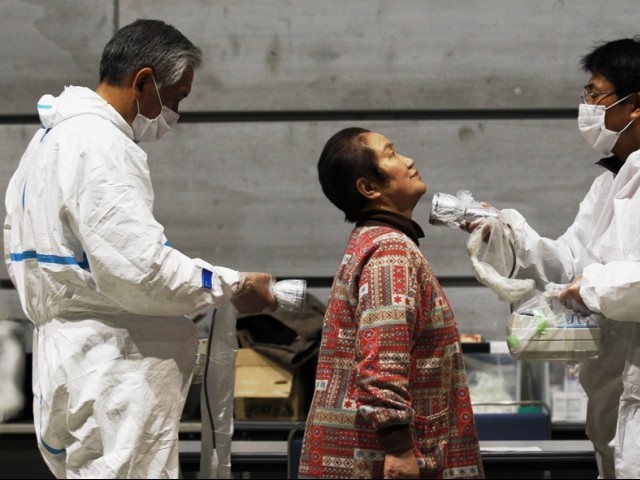 A woman is being tested for possible nuclear radiation exposure at an evacuation center in Koriayama, Fukushima Prefecture, northern Japan, March 29, 2011, located about 70 km (44 miles) from the tsunami-crippled nuclear reactor. PHOTO: REUTERS

LONDON: Traces of radioactive iodine believed to be from Japan’s damaged nuclear plant have been detected in Britain, officials said on Tuesday, adding that they posed no threat to the public.

“The concentration of iodine detected is extremely low and is not of concern for the public or the environment,” said James Gemmill, a radioactive substances manager for the Scottish Environment Protection Agency (SEPA).

The iodine was detected by a SEPA air sampler in Glasgow, Scotland, after the agency stepped up its scrutiny of air quality following the problems in Japan.

The earthquake and tsunami that ravaged the Asian nation’s northeast coast and left about 28,000 dead or missing also knocked out reactor cooling systems at the Fukushima plant, which has leaked radiation into the air and sea.

Similarly low levels of iodine have been reported in other European countries such as Iceland and Switzerland, SEPA said.

Syrians rally for Assad, president due to speak