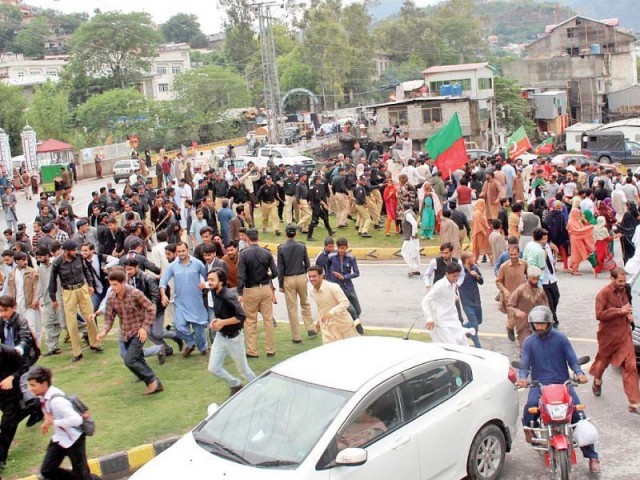 A view of policemen trying to stop PTI workers from protesting. PHOTO: ONLINE

MUZAFFARABAD: A scuffle broke out after police in Azad Jammu and Kashmir Police (AJKP) charged a peaceful protest by the Pakistan Tehreek-e-Insaf (PTI) against Prime Minister Nawaz Sharif on Monday.

PTI’s AJK Chapter Vice President Abdul Majid Khan along with dozens of party workers who were protesting at the Burhan Wani Shaheed Chowk were subsequently arrested for a brief period for what police claimed was a congregation which violated government orders restricting gatherings by five or more people.

“The district administration had imposed section 144 in the area surrounding the press club to discourage protests and demonstrations,” said City Police Station SHO Rashid Habib, adding that “PTI had violated  section 144 by organising a protest at Burhan Wani Shaheed Chowk and we arrested them.”

Police subsequently shifted  Khan and other workers to the City Police Station where they were released after two hours.

After being released the PTI leader claimed that the law seemed to have been applied selectively.

“We were protesting against PM Nawaz Sharif who has lost the moral authority [to govern] after the Supreme Court decision [in the Panamagate case] and he should resign till the final report of the Joint Investigation Team (JIT) arrives,” Khan said.

He added that according to the police they had violated section 144 by gathering in the square.

“We want to ask the government of AJK that on April 20 the Pakistan Muslim League-Nawaz (PML-N) workers took out a rally at the same spot, did they not violate section 144?” the PTI leader asked.

He claimed that they had approached the district administration and the police as per the proper procedure to seek permission to stage a rally in the square. Permission, Khan claimed, had been granted following which party workers proceeded with their rally.

“But suddenly the police stormed the gathering and arrested workers,” he said.

Noting that he was an elected member of the AJK Legislative Assembly, Khan said that it did not dissuade the police from manhandling him.

“They dragged and pushed me into the police van. I am an elected representative of the assembly and the way the police behaved to arrest us was unethical and illegal,” Khan said.

“We know this all was done on the instructions of PML-N leaders who have failed to deliver in AJK for the last eight months,” he added.

Khan further said that PML-N leadership believes in a dictatorship and hence could not tolerate a peaceful protest by the PTI or other political parties.

“We are committed to exposing the looting and nepotism in the name of good governance in AJK which is on the rise,” Khan added.

“Police action was ‘motivated’ since the PML-N government in AJK is not ready to tolerate opposition over genuine issues,” said Kashmir Council member and senior leader of the Pakistan Peoples Party Younas Mir as he condemned the police action.

“When the PM-N stages a protest at Burhan Chowk it does not constitute a violation of section 144, but when other political parties stage a peaceful demonstration at the same venue, it is considered a violation of law, which is the highest level of hypocrisy from the ruling elite of AJK,” Mir added.

He urged the AJK Chief Secretary Ejaz Munir to take notice of the highhandedness of AJK police against political workers.