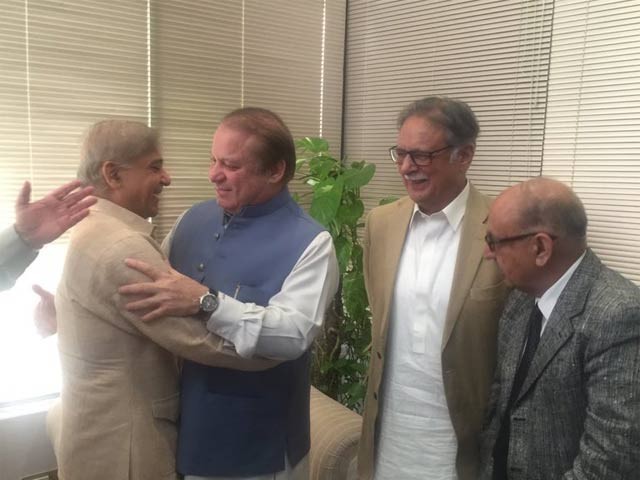 ISLAMABAD: In a judgment that could possibly change the political landscape of Pakistan, the top court has declared that Prime Minister Nawaz Sharif and his family failed to justify how they accumulated their offshore assets. The five-judge apex court bench, however, could not reach a consensus on the disqualification of the premier and hence ordered the formation of a joint investigation team (JIT) to settle the saga that started with the Mossack Fonseka leaks just over a year ago.

After the passage of almost two months, the bench, headed by Justice Asif Saeed Khosa, ended the suspense on Thursday with a split decision and a 547-page judgment.

Each judge wrote individual notes in the judgment. While all five were unanimous in their findings that Premier Sharif can be directly disqualified by the apex court, they are divided over the procedural course of action that should be taken in this particular case.

With one voice, PTI, PTI ask Nawaz to resign

Also of interest is the fact that Justice Asif Khosa and Justice Gulzar Ahmad – the next two judges in line to become chief justice of Pakistan – were both in favour of disqualifying the prime minister for failing to meet the constitutional requirement for honesty with the top court and the nation, but the majority, namely Justice Ejaz Afzal Khan, Justice Azmat Saeed Sheikh and Justice Ijazul Ahsen, were in favour of a Joint Investigation Team (JIT) to probe the Panamagate case further. The team would submit a report within 60 days of its formation.

Justice Ejaz Afzal Khan, who authored the judgment, observed that sufficient material has surfaced on the record to show that the premier, his dependents, and Benamidars acquired assets in the early nineties and thereafter which, being disproportionate to his known means of income, call for a thorough investigation.

Legal experts, however, wondered why the majority judgment was silent over the reinvestigation of Hudabya Paper Mills scam against the Sharif family. Likewise, the court did not give any observation over the conduct of the NAB chairman in that case. Surprisingly, the court also did not ask the premier’s daughter Maryam Nawaz to join the investigation before the JIT.

“By a majority of 3 to 2…we hold that the questions how did Gulf Steel Mill come into being; what led to its sale; what happened to its liabilities; where did its sale proceeds end up; and how did they reach Jeddah, Qatar and the UK,” the judges wrote.

They then move on to asking “whether Hussain and Hassan Nawaz, in view of their tender ages, had the means in the early nineties to purchase the flats, whether the sudden appearance of the letters of Hamad Bin Jassim Bin Jaber Al-Thani is a myth or a reality; how bearer shares were converted into flats, who, in fact, is the real and beneficial owner of Nielsen Enterprises and Nescoll, how Hill Metal Establishment come into existence; where did the money for Flagship Investment Limited and other companies set up by respondent Hassan Nawaz  come from, where did the working capital for these companies come from, and where do the huge sums running into millions gifted by Hussain to the PM come in from.”

The judgment finds that these issues are enough to merit a thorough investigation.

The majority judges observed that in normal circumstances, such an exercise could be conducted by NAB, but when its chairman appears to be indifferent and even unwilling to perform his part, they are constrained and must look elsewhere. Therefore, a Joint Investigation Team (JIT) would be constituted with a Federal Investigation Agency (FIA) officer of the rank of additional director general or above to head the team. The official would be required to have firsthand experience of investigating white-collar crimes and related matters. He or she would be joined by a representative of NAB, a nominee of the Security and Exchange Commission of Pakistan (SECP) familiar with money laundering and white-collar crimes, a nominee of the State Bank of Pakistan (SBP), a seasoned Inter-Services Intelligence (ISI) officer nominated by its director general, and a seasoned Military Intelligence (MI) officer nominated by its director general.

The majority judges’ order asked the heads of these departments to send in their respective nominee’s names within seven days so that they can be placed before the bench for nomination and approval.

“The JIT shall investigate the case and collect evidence, if any; showing that the PM or any of his dependents or Benamidars owns, possesses, or has acquired assets or any interest therein disproportionate to his known means of income,” says order.

The court has asked the PM and his both sons to appear and associate themselves with the JIT as and when required. The JIT may also examine the evidence and material, if any, already available with the FIA and NAB relating to or having any nexus with the possession or acquisition of the London flats or any other assets or pecuniary resources and their origin.

The JIT shall submit biweekly reports before a special bench – a request for its formation is part of the judgement. It has also been given a sixty-day deadline to file its final report.

Later, the bench may pass appropriate orders in exercise of its powers under articles 184, 187, and 190 of the Constitution including an order for filing a reference against the PM and any other persons associated with any crime if justified on the basis of the material brought on record before it.

The majority judges also held that upon receipt of the reports, periodic or final of the JIT, as the case may be, the matter of disqualification of the PM shall be considered, adding that if found necessary for passing an appropriate order in this regard, the premier or any other person may be summoned and examined.

Legal experts said that in view of this observation, the court has declared that they can disqualify the PM at an appropriate time.

How did Gulf Steel Mill come into being, what led to its sale, what happened to its liabilities, where did its sale proceeds end up, how did they reach Jeddah, Qatar and the UK

Did Hussain and Hassan Nawaz, in view of their tender ages, have the means in the early nineties to possess and purchase the flats

Whether sudden appearance of the letters of Hamad Bin Jassim Bin Jaber Al-Thani is a myth or a reality;

How bearer shares crystallised into the flats,

Who is the real and beneficial owner of Nielsen Enterprises and Nescoll,

How did Hill Metal Establishment come into existence,

Where did the money for Flagship Investment Limited and other companies set up by Hassan Nawaz come from,