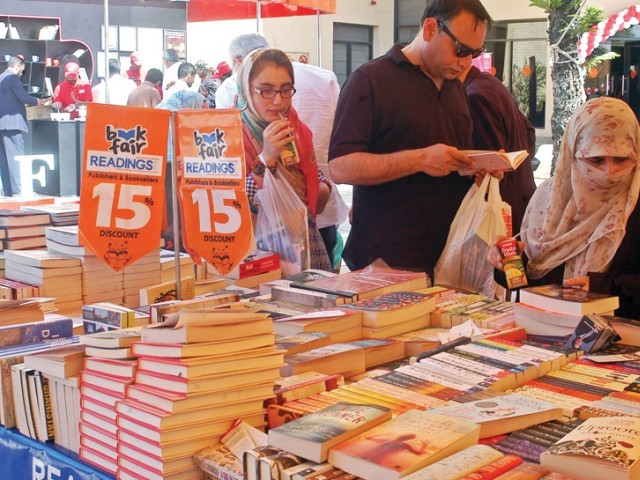 People browse through books displayed on a stall at ILF. PHOTO: Waseem Nazir/Express

ISLAMABAD: The ‘freedom’ afforded by social media had descended into a free-fall of trading serious allegations culminating into the ‘political lynching’ of a journalism student in Mardan last week.

This was the view shared by panellists in a session on ‘Social Media: New Strategies for creativity and change’ on the third and final day of the Islamabad Literature Festival on Sunday. The speakers discussed some positive changes and challenge the social media is bringing about in our society, especially with regards to its ‘misuse’.

They suggested that social media had grown to become a defining voice building an alternative narrative to the controlled conventional media.  Television anchor Moeed Pirzada, while tracing the rise of social media, said that since conventional media was controlled by the ruling elite and presented a limited reflection of the public’s view, the easy access to social media had given everyone the opportunity to raise their voice. Presenting figures on the permeability of social media platforms in the country, Pirzada reckoned that it had become a major platform for political discourse with all opinion leaders feeling that having a social media account was now required.

However, he said that irresponsible expression about religion on social media and then its subsequent misuse had become an issue as witnessed in recent cases where blasphemy accusations were levelled against social media users.

Talking about the lynching of a student in Mardan by his fellow students on mere accusations of posting blasphemous content on social media, he termed it a ‘political lynching’, adding that social media platforms were being used to level allegations. Referring to the use of the platform in other countries, such as in India, the anchorperson suggested that there was a management regime which controls social media and any comment made against the states’ policy is removed.

“Currently, there is no office of Twitter and Facebook in Pakistan or country head to manage the content while India does have offices of the both networking sites to control the flow of information and expression,” he said suggesting that Pakistan should also employ such a management model which is independent to keep a check on misuse of social media. Adnan Khan Kakar, an IT professional and the co-editor of an upcoming blogging platform HumSub, said the purpose behind launching his website was to give the youth a neutral narrative in Urdu since the mainstream Urdu media promoted sensationalist and jingoistic content which does not give unbiased views as compared to the English press which seems to be relatively more responsible, credible and rational.