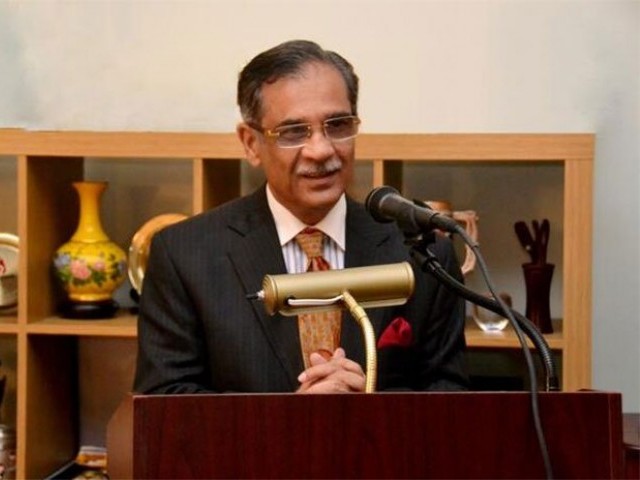 ISLAMABAD: The gruesome lynching of a university student in Mardan has shocked the entire nation, prompting a suo motu notice by the chief justice of Pakistan on Saturday.

Mashal Khan, a student of Journalism and Mass Communication at Mardan’s Abdul Wali Khan University, was shot in the head and chest on Thursday and then his body was desecrated by a mob of fellow students which accused him of committing a blasphemy.

The harrowing video of the sickening violence shot by mobile phone cameras showed Mashal’s disrobed body being dragged, first in a hallway and then on a road of the campus.

Taking notice of the incident, Chief Justice of Pakistan Mian Saqib Nisar ordered the Khyber-Pakhtunkhwa’s police chief to submit a report within 36 hours.

Shocked by the ‘senseless display of mob justice’, Prime Minister Nawaz Sharif directed law enforces to apprehend those responsible for the murder. “The perpetrators behind the murder of Mashal Khan should know that the state would not tolerate citizens taking the law in their own hands,” Sharif said in a statement issued by his office two days after the incident.

“No father should have to send his child off to be educated with the fear of having him returned in a coffin,” he said, urging the nation ‘to stand united’ to condemn this crime and promote tolerance and rule of law in the society.

A source told The Express Tribune that Sharif had first adopted a ‘wait-and see’ policy considering the sensitivity of the situation. However, when his administration came under scathing criticism, he decided to break his silence with a strong-worded statement.

Additionally, PTI Chairman Imran Khan’s strong condemnation of Mashal’s murder is also cited as a reason for Sharif to jump into the fray. “He [Imran] took a high moral ground on the issue and left little space for us to adopt a laidback approach,” the source added.

Another source in the PML-N said Sharif decided to speak his mind on the matter in order to clear the air linked to Sharif’s stance on blasphemy.

Last month, Sharif termed blasphemy as an ‘unpardonable crime’ after reports regarding circulation of blasphemous content on social media went viral. The premier had also ordered authorities to “search for the people spreading blasphemous material and prosecute them under the law”.

An insider said the prime minister’s strong stance on the Mardan lynching was aimed at preventing the misuse of the blasphemy law.

“When the prime minister termed blasphemy an unpardonable offence, he meant that blasphemy culprits should be arrested by law enforcers and tried under the law. It didn’t give the public a licence to kill anyone accused of blasphemy,” he said.

Speaking to The Express Tribune, PM’s Adviser Ameer Muqam, who also hails from K-P, said Premier Sharif has directed the provincial police chief and home ministry to make arrangements for the restoration of educational activities at the AWKU at the earliest.

Muqam said instructions have also been issued to provide legal support to Mashal’s family to pursue the trial of the suspects and to ensure protection of others who had sustained injuries in the April 13 incident.

Meanwhile, Interior Minister Chaudhry Nisar Ali Khan termed Mashal’s lynching a ‘coldblooded murder’.  Replying to a query at a news briefing on Saturday, the minister lauded efforts of the K-P government to bring the criminals to book. “It is unfortunate that the people involved in Mashal’s murder were using the name of religion,” he added.