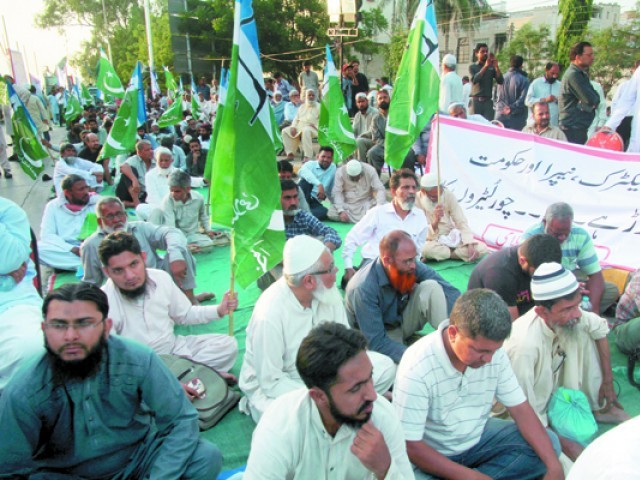 More than 200 workers, supporters of the party and protesters sat on the main road and shouted slogans against the K-E. PHOTO: ATHAR KHAN/EXPRESS

KARACHI: Entering its second phase of sit-ins and protests across the city, Jamaat-e-Islami (JI) held a demonstration against the K-Electric (K-E) at their divisional head office on Sharae Quaideen Tuesday evening.

The protest and campaigns were launched by the party to put an end to the problems of the residents because of the increased tariff, overbilling and fuel adjustment charges. JI is holding the sit-ins and protests in the city under the supervision of their Karachi chief, Hafiz Naeemur Rehman.

Fed up: JI comes out on the streets against KE

More than 200 workers and supporters of the party sat on the main road and shouted slogans against the K-E. Many people turned up at the demonstration with their increased bills and complaints against the electric supply company.

Along with party supporters and protesters, many residents also took part in the demonstration and shared the problems they have been facing because of the K-E. Some of the former employees of the K-E were also present at the sit-in.

The party initially organised their first sit-in on Sharae Faisal on March 31. However, due to violation of Section 144, the sit-in was called-off and Rehman, along with other leaders, was arrested by the police.

The party, after a face-off with the police on March 31, staged a successful sit-in in front of the K-E head office on April 7. During a press conference on April 8, Rehman announced that the party will hold the second phase of the protests, in which they will organise sit-ins at four divisional head offices of the K-E and more than 2,000 corner meetings to be conducted on council levels.

The main protest will be held on April 22 in front of Governor House because the party believes that it is the federal government’s responsibility to provide the people with power and gas.

Speaking to The Express Tribune, Rehman said they were contacted by Sindh Governor Muhammad Zubair and they have discussed their demands with him. “We are ready to talk and find a solution of this problem. However, we will not talk to any third person and will only speak to the command and controlling authority of the K-E,” he said. Rehman added that they are not willing to have discussions with someone who is not the controlling authority and will only have false and fake promises.

Rehman pointed out that their party is fighting for the people. He added that the issue of increased tariffs and overbilling is a problem of the residents and the party and its workers will never step back until their demands are accepted and K-E does not take back the increased tariffs. “If the provincial and federal governments will not intervene, we will protest and stage a sit-in in front of Governor House,” he said.