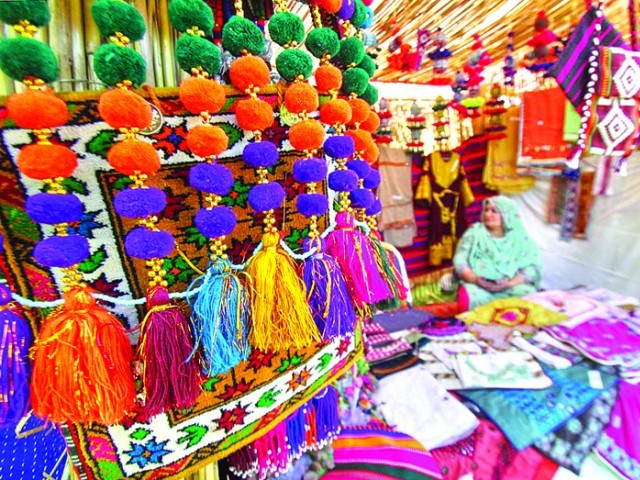 Stalls of traditional jewellery, bags, vases and other items representing all four provinces, and G-B and Kashmir were set up in the craft bazaar. PHOTOS: ONLINE

The on-going cultural festival Lok Mela has been attracting a large number of people at National Institute of Folk and Traditional Heritage (Lok Virsa). It was inaugurated on April 7 and showcases traditions of the four provinces, besides Gilgit-Baltistan (G-B) and Kashmir.

A culture bazaar presented crafts with a beautiful amalgamation of cultures from across Pakistan and Kashmir and G-B. Traditional handicrafts were up for sale like jewellery, purses, pots, and vases. Food stalls were also set up and the mouth-watering aroma of sajji and chappli kabab wafted around the place.

The bazaar was buzzing with happy people from all provinces. Women were trying out jhumkian, the traditional Pakistani earrings, and young girls were also going through and purchasing handmade purses and flowers.

The colourful designs of all handicrafts and the cheerful sounds of laughter and music added more life to the event.

An event to celebrate the Constitution Day was arranged in the open air theatre of Lok Virsa, during Lok Mela on Sunday. Senate Chairman Mian Raza Rabbani was chief guest on the occasion while parliamentarians, diplomats, citizens, artists, and many other people attended the ceremony.

Rabbani spoke of the importance of Constitution Day on the occasion. He lauded Lok Virsa Executive Director Dr Fouzia Saeed for organising a cultural event in celebration of the upcoming Constitution Day.

The Constitution of Pakistan was passed by the National Assembly on April 10, 1973 and received the Presidential assent on April 12, 1973. The Senate, under the leadership of Chairman Rabbani, initiated the commemoration of Constitution Day by highlighting the importance of its landmark date. Since 2015, the upper house of parliament continues its practice of celebrating Constitution Day with more vigour and zest every year.

This year’s theme is “Enhancement of Role and Powers of Senate of Pakistan; to protect the rights of the Federating Units.”

Senate Chairman also visited various provincial Pavilions and lauded the artisans and artists for showcasing their beautiful cultural heritage in the federal capital.