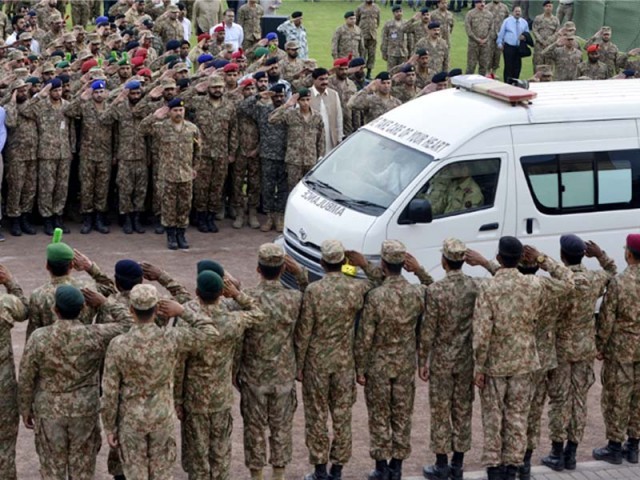 Armymen pay respect as an ambulance carrying the coffins of martyred soldiers passes through. PHOTO: AFP

LAHORE: In less than two months after the deadly Mall Road attack, terror revisited Punjab’s provincial capital on Wednesday when a suicide bomber targeted a census team in Lahore’s outskirts, killing at least seven people – including four soldiers of the Pakistan Army – and injuring 15 others.

According to Punjab govt spokesperson Malik Ahmed Khan, the attack took place early in the morning at Manawala Stop on Bedian Road, when army troops were boarding a van, engaged in census duty.

“The blast occurred at around 07.45 am when 17 soldiers of 186 # Census team of District Lahore were boarding a private van parked outside a shop. Soldiers had been gathering at the point for the last four days. From there they would be taken to their designated points of duty,” said a police official.

“Seven people including four soldiers and an officer of the Pakistan Air Force (PAF) were killed and 15 injured in the attack. Five of the injured were stated to be in critical condition. Three vans, a motorcycle and nearby shops were also damaged in the incident,” he added.

Initial investigations suggest that the bomber walked up to the van and detonated the explosives strapped to his body at the rear end of the van with a huge bang that was heard in a radius of several kilometres.

Ghulam Murtaza, a resident of the locality near the blast scene, said he was on his way home after dropping his children to school when he lost control of his bike due to a ‘deafening sound’.

“A few seconds later I resumed my senses and got up. I rushed towards the direction of the blast and saw bodies of a number of people in a pool of blood,” he said, adding that one of his neighbours, Awais Zaffar, was also lying among the injured along with his wife and minor child.

According to hospital sources, the deceased were identified as Awais Zafar (an employee of PAF), Muhamamd Boota and Abdul Rehman (passersby) and Sajid, Irshad, Abdullah and Riaz – all troops of Pakistan Army.

Heavy contingent of police and paramilitary Rangers also reached the spot and cordoned off the crime scene with barbed wire and tents.

The Bomb Disposal Unit said around 10-12 kilos of explosive material was used in the suicide vest which also contained ball-bearings and shrapnel.

Security officials said they had recovered head of the alleged bomber from a nearby roof. “We have also found his legs from the crime scene. The bomber’s head is still recognizable,” said an official, adding that he looked 20-22-year-old.

The investigator said the attacker ‘appeared to be’ an Uzbek. “He resembles the sketch issued by SP Model Town a few weeks back,” he claimed, adding that the picture was pasted in all police stations of Lahore with intimation that a 24-year-old man identified as Irfan was a ‘potential’ suicide bomber.

However, the claim could not be confirmed independently or by a second source.

After the attack, the police, the Counter Terrorism Department (CTD) and sensitive agencies launched a search operation in the nearby localities and arrested 17 suspects while checking identity of people through biometric machines.

The CTD was investigating the matter from different angles. They have collected Call Data Records of suspicious phones after geo-fencing. They are also collecting CCTV footage of the nearby areas to locate the bomber, his hideout and the passage he used to reach the spot.

An official told The Express Tribune that the modus operandi of the attacker and the location suggest that the attacker had not acted alone. “He must be staying there for quite some time. The attackers had recced the spot for a few days as the census van stationed there only for a few minutes.”

Army chief General Qamar Javed Bajwa and the Pakistan Bureau of Statistic (PBS) chief expressed grief over loss of lives in the attack as they resolved to continue the census exercise.  “Conduct of census is a national obligation. Conduct of census will be completed at any cost,” said the army chief, according to the military’s media wing.

Chief Census Commissioner Asif Bajwa said they will not succumb to any pressure and continue the census exercise.  Addressing a press briefing at the Bureau of Statistic Office, he said after the attack the government is considering devising a new security plan.

“The census staff will make a new plan with the consultation of the army,” he said. “I am satisfied with the census operation in the country.”  The first phase of census is going on in 63 districts of Pakistan and people who have not been counted should inform the relevant authorities in their areas, he added.