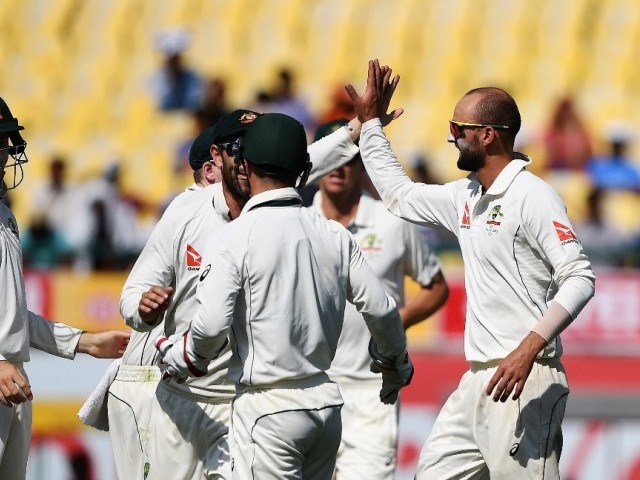 LOUDEST ROAR: Fast-bowlers Hazlewood and Cummins bowled their hearts out during frugal spells to restrict India but Lyon was the lucky one to capitalise on the pressure being built. PHOTO: AFP

The 29-year-old made the most of a lively track at Dharamsala which is hosting its first-ever Test to return a rich haul of 4-67.

Fast-bowlers Josh Hazlewood (1-40) and Pat Cummins (1-59) also bowled their hearts out during frugal spells to restrict the top-ranked hosts to 248-6 at stumps.

India still trail by 52 runs with four wickets in hand after Australia made 300 in their first knock, largely thanks to a fine 111-run knock by captain Steve Smith.

At stumps, Wriddhiman Saha was batting on 10 with Ravindra Jadeja on 16. Earlier, the Indian batsmen were guilty of squandering good starts in a match they must win if they are to regain the Border-Gavaskar trophy.

Lokesh Rahul (60) and Cheteshwar Pujara (57) batted patiently and shared 87 runs for the second wicket, the best partnership so far for the hosts. Stand-in skipper Ajinkya Rahane looked set to score big but ended up gifting a catch to Smith off Lyon for 46 made off 104 balls.

All-rounder Ravichandran Ashwin (30) was adjudged lbw off Lyon and although the batsman opted for a review, TV replays showed the ball would have hit the stumps. Ashwin hit four fours in his brisk 49-ball knock.

Not many would have placed their bets on Lyon to come good in the decider, with the spinner having given away 163 runs while taking just one wicket in the previous drawn Test at Ranchi. But Lyon, whose work as a curator means he has a sharp understanding of the wicket, brought Australia back into the game through some classic old-fashioned spin.

Lyon’s first victim was Pujara, who was coming into the match on the back of an epic 202-run knock at Ranchi. Pujara tried to defend but the ball ripped back in to hit the glove and then lob up to short leg where Peter Handscomb pouched an easy catch. Pujara’s 57-run knock took his run tally past the 400-run mark in the series, behind only Smith who has 482 runs from seven innings.

The final session saw another gruelling contest between the bat and the ball with the hosts scoring 95 runs while losing four wickets. The Indians would have been in further trouble but for Matthew Renshaw who dropped two catches, much to the frustration of Smith.

Words were exchanged with long stares on a couple of occasions but mostly the players remained within the boundaries of good behaviour in what has otherwise been a fractious series. Australia, who triumphed at home in 2014-15, need just a draw to retain the trophy.