43 dead in Sorange mine blast, no survivors

43 dead in Sorange mine blast, no survivors 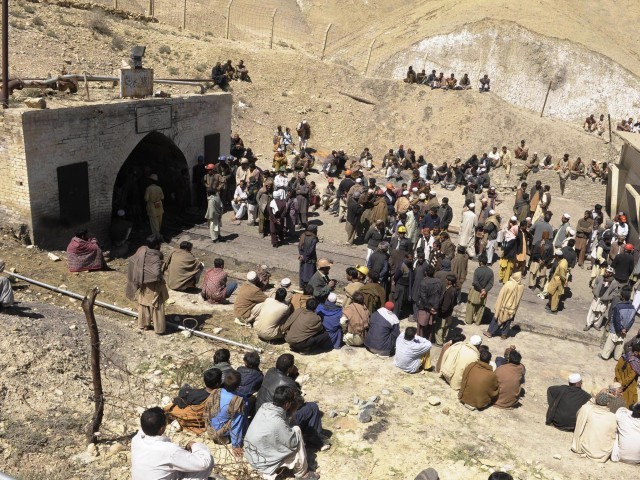 Pakistani miners and their relatives gather at the entrance of a mine in Sorange district of the insurgency-torn province of Baluchistan on March 20, 2011. PHOTO: AFP

QUETTA: All 43 miners in a colliery in southwest Pakistan that was hit by a blast at the weekend have been confirmed dead, officials said Tuesday, as rescuers ended their search operation.

“All 43 bodies have been recovered,” Iftikhar Ahmed, provincial chief inspector of mines for Balochistan told AFP. “There are no survivors and the mine is being sealed,” Ahmed said.

The mine in the far-flung Sorange district of the troubled southwestern province was poorly ventilated, allowing poisonous gases to accumulate and trigger blasts that led to a collapse on Sunday, officials said.

The mine is run by the state-owned Pakistan Mineral Development Corporation and officials said they will launch an investigation into why the warnings to stop mining were not heeded.

The chances of finding any survivors are slim in the mining accident in Sorange, where 30 bodies had been retrieved until Monday night.

The accident on Sunday occurred when a coalmine caved in due to explosions caused by accumulation of methane gas in Sorange area, about 40 kilometres from Quetta.

“Forty-five miners were working at a depth of 6,000 feet in a coalfield when the accident occurred. Thirty bodies have been taken out and the rescue operation is continuing to recover more bodies,” said Balochistan Home Secretary Akbar Hussain Durrani.

In what is said to be the worst mining accident in recent years, most bodies found were decomposed or completely burnt. The majority of the victims belonged to Shangla in Khyber- Pakhtunkhwa where their bodies have been sent for burial. Durrani said the government has constituted an inquiry committee to probe the accident.

“The committee is investigating why the mining was not stopped despite a warning issued,” he said. Rescue operations are being conducted by workers of the mines department, civil defence, Emergency 187 and Frontier Corps. “The miners from both the shifts were in the coalmine when the explosions occurred so the number of casualties is higher,” a rescue worker said.

Miner Yusuf Khan said that such tragedies are a routine matter in the coal mines of Balochistan. “We are being treated worse than dogs. I earn Rs1,100 weekly for putting my life in danger,” he added.

An official at the Mines and Mineral Department said that according to international laws, miners must have a protection hat, lamp, gas detector, food and water before going into the coalmine. In case of an accident, the compensation money for a registered miner is stated to be Rs400,000, he said.

However, there are more than 40,000 coalminers working in more than 200 coalmines in Balochistan and a considerable number of miners are not registered since mine owners, including government firms, sublet mines.

“You can rarely find anyone who has received compensation,” said one official. Not only are the lives of miners at risk due to the absence of proper safety measures, the overall working atmosphere in these mines is also not satisfactory and poses serious threats to health, he said.

Labour union leaders claim that so far no one responsible for such accidents has been punished. “We have protested over the negligence of the authorities, but it has had no result,” said Bakht Nawab, a union leader, adding that there was no ventilation in the Sorange coalmine.

Another deadly accident had occurred in the same coalmine in 2008 which led to the death of 15 people. According to a report, as many as 161 miners have been killed in Balochistan during the past three years.

Proceedings of the Balochistan Assembly on Monday were dominated by a debate over the circumstances behind the coalmine collapse which claimed the lives of 45 miners.

Provincial lawmakers incessantly stressed the need for an impartial inquiry and monetary compensation for the families of the victims. Provincial Minister Sardar Aslam Bizenjo told the assembly that all miners trapped underground following the explosion had lost their lives. “I visited the site soon after the incident and observed that there wasn’t any proper equipment or facilities to carry out a rescue operation,” he stated.

Members of the provincial assembly expressed their shock over the incident and lamented the lack of facilities for the miners. They stated that both the mining firms and the authorities do not take necessary precautionary measures which often result in such deadly incidents.