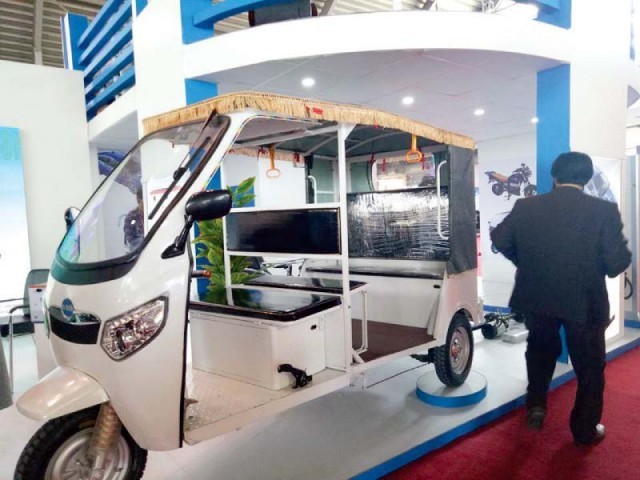 An electronic, solar-powered rickshaw Rick-E is on display. PHOTO: EXPRESS

LAHORE: A three-day exhibition aimed at bringing together key players and decision-makers in the energy sector on one platform kicked off at the International Expo Centre on Thursday.

More than 100 exhibitors from 15 countries will showcase latest energy products and services, providing the visitors with an opportunity to network with industry professionals, get up to date with industry developments, make new business contacts and find potential suppliers, according to the event manager, FAKT Exhibitions’ Khawaja Wahaj.

With eight to nine hours of sunshine per day the climatic conditions in Pakistan are ideal for solar power generation. According to studies, Pakistan has 2.9 million megawatts of solar energy potential besides photovoltaic opportunities.

According to figures provided by FAKT, Pakistan spends about US$ 12 billion annually on the import of crude oil. Of this, 70% oil is used in generating power, which currently costs us Rs18 per unit. Shifting to solar energy can help reduce electricity costs down to Rs 6-8 per unit.

Among several eye-catching and innovative solar technologies on display at the exhibition, one such product is Rick-E, an electronic, solar-powered rickshaw, developed by WRL technologies – a sales and distribution company based in the US and Dubai.

Mehtab Chaudhry, an engineer at the company, told The Express Tribune the noise- and pollution-free Rick-E can run at a maximum speed of 60kmh while its full charge lasts up to 150km, takes 16 to 30 seconds to charge up and is operable in knee-high water.

Chaudhry said the company had also developed a retrofitted kit, which could be installed in other rickshaws and one battery could last up to 45 years. The prices have not been finalised yet, however, one unit is expected to cost around Rs300,000.

She said the company was looking forward to finalising a contract with the Lahore Transport Company in order to bring the rickshaw to the masses.

UET Peshawar students Muhammad Ishaq and Saad Rashid said their research group was working on a feasible solution to integrate generators with a solar-powered source. “Through our research, we have managed to develop a numerical relay – a fast-response unit that can trip the grid system before any sort of malfunction may damage the grid components,” said Ishaq.

He added the team was working to modify the concept and hoped to formally launch the technology within the next five to six months.