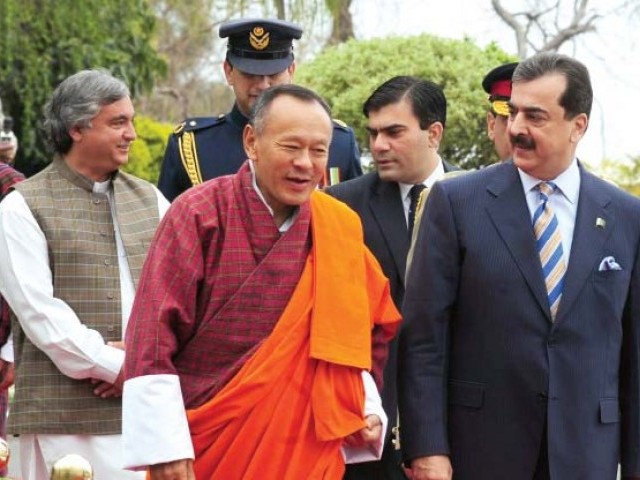 Pakistan and Bhutan on Saturday expressed their resolve to strengthen bilateral ties in all spheres, with a particular focus on trade and tourism.

Prime Minister Yousaf Raza Gilani and his Bhutanese counterpart Lyonchhen Jigmi Y Thinley covered a vast range of issues in an hour-long exclusive talk. Prime Minister Thinley, who is on a three-day visit of Pakistan on the invitation of PM Gilani, appreciated the role Pakistan is playing to maintain stability in the region.

Thinley lauded Gilani’s contribution to engage India into a constructive dialogue for the peace, stability and prosperity of both countries and the region at large. Gilani said he was grateful to the prime minister of Bhutan for facilitating his talks with Indian Prime Minister Manmohan Singh in Thimpu, where the two neighbours decided to move forward and resume their composite dialogue.

During the talks, Pakistan offered Bhutan cooperation in education, human development and an increased number of scholarships, particularly in medicine and engineering. Gilani reiterated Pakistan’s offer to train Bhutanese diplomats at its Foreign Services Academy and invited the speaker of the Bhutanese parliament to visit Pakistan. He also stressed the need to share information and good practices, particularly in the fields of hydro power generation and natural disaster management.

Prime Minister Gilani also proposed that Pakistani parliamentarians should also visit Bhutan to study their development model, especially the model of “Gross National Happiness”. The model is based on holistic and natural development rather than on the economic index.

The two leaders also discussed closer cooperation at the regional forum of Saarc and discussed expanding the tourist potential between the two countries.