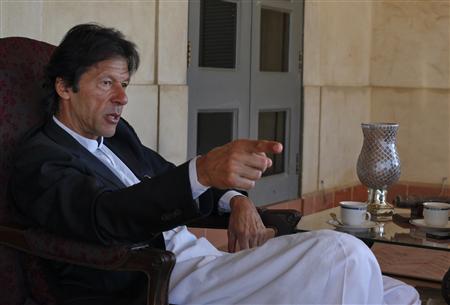 A day after a scuffle broke out between lawmakers of ruling Pakistan Muslim League-Nawaz (PML-N) and Pakistan Tehreek-e-Insaf (PTI), Imran Khan announced that no representative of his party will appear on TV shows or public forums where Javed Latif is present.

The PTI chief took to Twitter to state that PTI members will not share any kind of platform with PML-N MNA Latif.

No PTI rep will go on any TV chat show where Jawed Latif is invited. In any civilised country he would be banned from all public forums

Nor will our party members & leaders attend any public forum event where Jawed Latif is invited.

A heated argument between the members of Pakistan Muslim League-Nawaz (PML-N) and Pakistan Tehreek-e-Insaf (PTI) during a session of the National Assembly led to a brawl outside the lower house, on Thursday.

According to details, PML-N’s Javed Latif slapped PTI’s Murad Saeed after house proceedings. In reply, Saeed punched him in the face. Earlier on the floor, Latif termed PTI chief Imran Khan a traitor and insane.

The conflict emerged during a session of the assembly as Saeed sought permission to speak on Pakhtun’s racial profiling in Punjab, but the deputy speaker asked him to shorten his remarks upon which the PTI MNA argued with him.

Soon after the incident, the PTI chief, in a series of tweets, accused Latif of using abusive language for Saeed’s female family members.

On the floor of the house, Latif remarked that PTI leaders, including its chairman, have no ethical training and don’t know how to speak. He termed Khan a ‘traitor’.

He was of the view that Pakhtuns are known for their hospitality worldwide, but Imran termed foreign players who came to Pakistan to play the Pakistan Super League final as ‘Phateechar’. He said PTI chief urges people to opt for civil obedience but then provokes them to evade taxes.

“When Shaikh Mujeeb or MQM conveyed the same then they were labelled as traitors. If they are traitors then he (Imran) is also a traitor,” said Latif.

These unethical comments did not go unanswered as when Latif and Saeed came face to face in the corridors of the NA building, a brawl broke out.

After the incident, Saeed stated that the PML-N member called the PTI leader a traitor which is totally intolerable. “Latif abused my leader which is not acceptable,” he said.

Addressing a press conference following the scuffle, PML-N’s Talal Chaudhary said PTI was not conducting politics in a respectable manner. PTI members ‘attack’ the assembly on the floor of the parliament and from ‘outside’ as well.

This was the second scuffle between the members of PML-N and PTI as the first took place on January 26 on the floor of the house.

Meanwhile, National Assembly Speaker Ayaz Sadiq has constituted a six-member Parliamentary Committee under the convenership of MNA Ghous Bux Mehar to probe the unpleasant incident of scuffle between Saeed and Latif at the outer gate of the parliament. The committee will submit its report by March 16, 2017 to Sadiq.