Muslim Female Fighters give shout out to Pakistanis

Muslim Female Fighters give shout out to Pakistanis 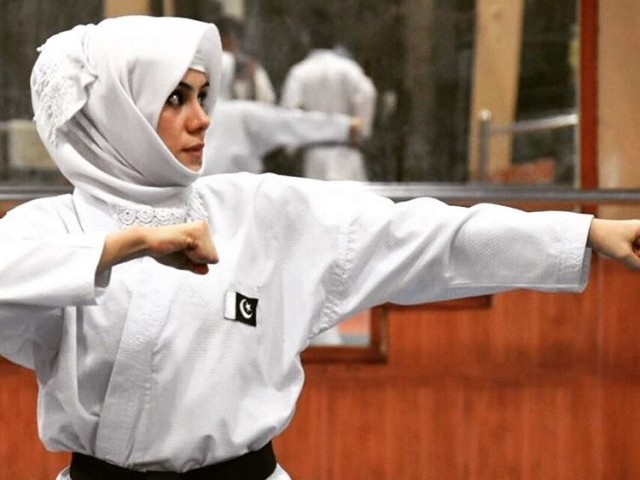 An Instagram account has taken the initiative of breaking stereotypes about Muslim women by posting pictures of female fighters from all over the world.

“The media crafts this narrative that Muslim women are submissive all the time. So I understand why people might initially think that,” Sara said while speaking to Vice magazine. “Traditionally, Muslim women haven’t been involved in too many sports, let alone combat sports.”

29 powerful images of Muslim women marching for their rights

Sara has a personal motivation in showcasing the vast community of Muslim fighters. “I’ve grown up participating in football leagues, found my way into taekwondo, and now kickboxing,” says Sara, who wears the hijab while competing. “I know a lot of women who were given ultimatums to either take that [their headscarf] thing off, or to forfeit.”

However, Sara intends to change the general perception. Citing the example of Pakistan, she said that presence of women in contact sports has been growing in the past few years. “Women’s boxing was non-existent in Pakistan and is now blossoming all over the country with hopes of Pakistan sending a female boxer to the next Olympics,” she said.

“Egypt and Malaysia are grooming a lot of female Muslim MMA fighters. Even Turkey and Morocco have a vibrant women’s kickboxing and Muay Thai scene. And Maryam El Moubarik won a gold medal for Morocco in an international Muay Thai competition, clad in hijab,” she added.

Here are a few images of Muslim female fighters from all over the world:

A post shared by Muslim Female Fighters (@muslimfemalefighters) on May 2, 2016 at 7:04am PDT

Congratulations to Malaysian MMA fighter Ann Osman @annosman , earning a first round submission victory against Hayat Farag of Egypt. The Egyptian fighter was giving a strong fight and it was a back-and-forth affair from the start until Ann got the submission! #mma #malaysiamma #muslimmmafighter #wmma #muslimfighter #muslimfemalefighter #egypt #egyptmma #malaysia #comebackfight #submission

A post shared by Muslim Female Fighters (@muslimfemalefighters) on Nov 9, 2016 at 7:49am PST

Meet the man trying to bring cricket to US