Syrian Kurds and Arabs have been fighti­ng IS since late 2015, with air suppor­t and other backin­g from US-led coalit­ion
By AFP
Published: February 10, 2017
Tweet Email 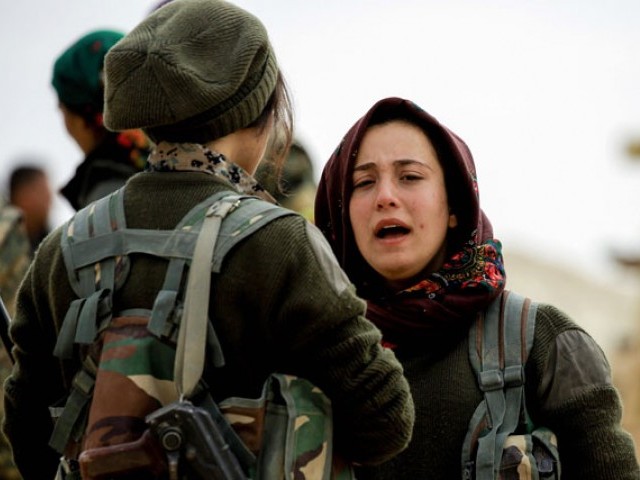 Batul, a 21-year-old female Arab fighter among the Syrian Democratic Forces, made up of US-backed Kurdish and Arab fighters, talks with another fighter near the village of al-Torshan, 20 km on the outskirts of Raqa on February 6, 2017. PHOTO: AFP

NEAR AL-TORSHAN, SYRIA: They are fighting the world’s most feared militants, but hundreds of Arab female fighters battling the Islamic State group in Syria are also confronting the disapproval of their relatives and society.

“I braved my tribal clan, my father, my mother. Now I’m braving the enemy,” says 21-year-old Batul, who is part of an Arab-Kurdish alliance battling to capture IS’s Syrian stronghold of Raqa. She is one of more than 1,000 Arab women who have joined Kurdish male and female fighters in the Syrian Democratic Forces (SDF) alliance, according to a spokesperson. 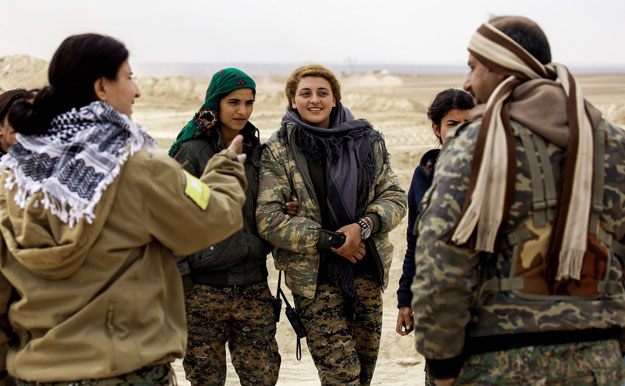 Jihan Cheikh Ahmad (L), spokesperson for the “Wrath of Euphrates” campaign and an Arab commander in the Syrian Democratic Forces, made up of US-backed Kurdish and Arab fighters, talks with other fighters near the village of al Torshan, 20 km on the outskirts of Raqa on February 6, 2017. PHOTO: AFP

Standing in the desert some 20 kilometres (12 miles) from Raqa, Batul speaks passionately about her decision to fight IS, which holds the nearby village of Al-Torshan. “My parents told me: ‘either you put down your weapons or we disown you’,” she says, wearing an ammunition vest and a floral scarf around her shoulders.

Her parents have not spoken to her since. Batul comes from the al Sharabiyeh tribe, one of the best-known of the conservative Sunni Arab tribes of northeast Syria. Her family views her as a rebel, who removed the headscarf worn by many Muslim women and refused her father’s orders to pray in front of him.

But she is proud of the decision she took two years ago to join the YPJ, the female counterpart to the Kurdish People’s Protection Units, which is a key component of the SDF alliance. “I joined the YPJ to liberate my homeland, but also to free women from slavery,” she says. “We must no longer remain cloistered behind four walls.”

Syrian Kurds and Arabs have been fighting IS since late 2015, with air support and other backing from the US-led coalition against the terrorist group. But the current battle for Raqa is the first time Batul has been on the front line, where warplanes roar overhead carrying out strikes, and mortars boom in the distance.

“The first time I held a weapon, I was very afraid,” she admits. “But now, my weapon has become part of me. It frees me and protects me.” She speaks in Arabic, but her sentences are peppered with Kurdish words picked up from her fellow fighters. “The relations between us and the Kurdish women are good. We don’t speak the same language, but we’re all here to free the country and women.”

Jihan Sheikh Ahmad, spokesperson for the campaign on Raqa, said the SDF now counts more than 1,000 Arab women in its ranks. “The YPJ’s experience has had a positive impact on society,” she told AFP. “The more territory we liberate, the more Arab female fighters have joined us.”

In a tent near the front line, six young Arab female fighters joke and share secrets as they sip tea. “My goal is to liberate women from the oppression of Daesh (IS), but also societal oppression,” says Hevi Dilirin, an Arab woman who adopted a Kurdish nom de guerre when she joined the YPJ.

“In our society, women have no say. But they should have the same rights as men,” she says, dressed in a camouflage jacket and white-and-grey sneakers. Syria’s Kurds have emphasised gender equality in both their militias and nascent autonomous institutions.

Since the outbreak of the conflict in March 2011, they have sided with neither rebels nor government forces, concentrating instead on developing a semi-autonomous region in north and northeastern Syria, as well as fighting IS.

But the Arab tribes there are among the more conservative segments of the population, and 21-year-old Doza Jiyan says most Arab families find the concept of female fighters “hard to accept.” “In our Syrian society, we find it bizarre for a woman to take up arms,” adds Jiyan, from the town of Ras al-Ain in Hasakeh province.

But she speaks confidently as she discusses the military situation with male colleagues. “IS is no longer invincible, they’re only fighting on motorbikes and mining the villages,” she says. IS’s extensive use of IEDs and mines has slowed the SDF’s progress towards Raqa, the extremist’s group most important remaining bastion in Syria.

The SDF announced a new phase in their bid to capture Raqa on February 4, pressing towards the city gradually from the north and northeast. Jiyan is convinced that the SDF’s military successes will eventually sway the opinion of her relatives and society, and she has no plans to leave. “I’m very happy here,” she says.