Masked Malaysian policemen keep watch ahead of the court appearance of Indonesian national Siti Aisyah, 25, and Vietnamese national Doan Thi Huong, 28, at the magistrates' court in Sepang on March 1, 2017, for their alleged role in the assassination of Kim Jong-Nam, the half-brother of North Korean leader Kim Jong-Un. PHOTO: AFP
SEPANG, MALAYSIA: A tightly-guarded Malaysian court Wednesday charged two women with murdering the estranged half-brother of North Korea's leader, who was killed with a powerful nerve agent, and warned them they face the death penalty if convicted.

The handcuffed suspects were brought to court surrounded by masked and heavily armed police and special forces for their first public appearance since they were arrested two weeks ago. At least one wore a bulletproof vest on leaving the court.

South Korea says the government of North Korean leader Kim Jong-Un ordered the killing of Kim Jong-Nam, who had lived overseas for years but had voiced criticism of the regime, and engaged two outsiders to carry it out.

Indonesian Siti Aisyah, 25, and Doan Thi Huong, 28, from Vietnam, were held just days after the killing at Kuala Lumpur International Airport on February 13, which Malaysia said was carried out with a nerve agent so deadly that the UN terms it a weapon of mass destruction. 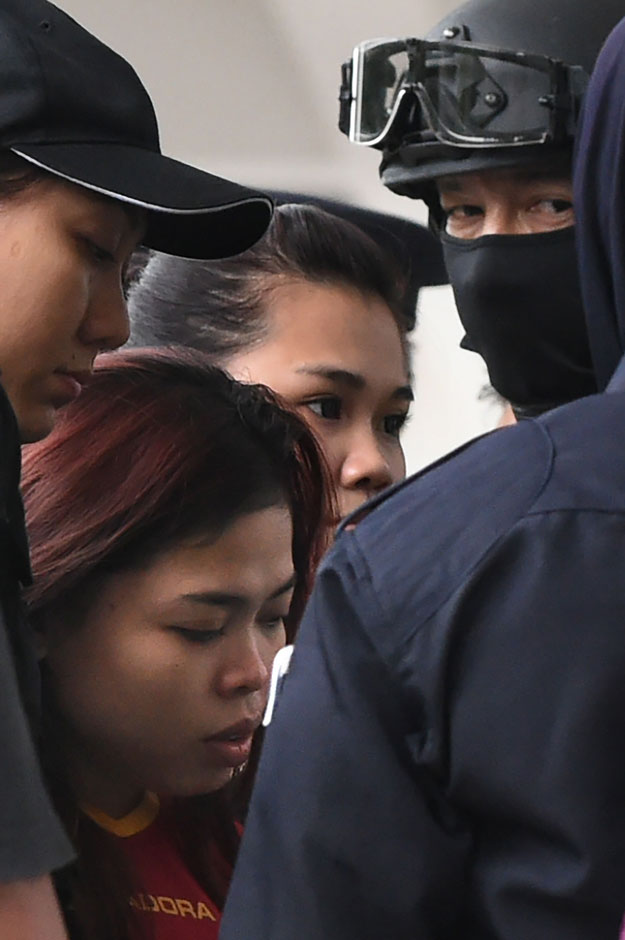 Indonesian national Siti Aisyah (C), 25, is escorted with a heavy police presence for a court appearance with Vietnamese national Doan Thi Huong, 28, at the magistrates' court in Sepang on March 1, 2017, for their alleged role in the assassination of Kim Jong-Nam, the half-brother of North Korean leader Kim Jong-Un. PHOTO: AFP

CCTV footage shows two women approaching him as he prepared to fly to Macau and seemingly push something into his face. Kim suffered an agonising death within 20 minutes of being attacked. Siti, wearing a red T-shirt, was brought in first to hear the murder charge read out before being taken away. Huong, dressed in a yellow top, then heard the charge in Vietnamese.

They were accused of murdering Kim with four others still "at large". Four North Korean suspects fled Malaysia on the day of the murder, police have said. Both female suspects say they thought they were taking part in a prank video but police have dismissed the claims.

Neither woman was asked to enter a plea Wednesday and their trial is not expected to begin for several months. However, Huong's lawyer S Selvam said she told the court: "I am not guilty." Selvam added his client was "nervous as she is facing a murder charge".

Huong was seen wearing a bulletproof vest as she was escorted out of the building and looked tired as she was led away. Indonesia's acting ambassador to Malaysia Andreano Erwin said he had met Siti in court and she was "calm". "We told her to take care of her health as it will be a long trial process," he said.

Jakarta's foreign ministry said later that defence lawyers had been granted a request for a "gag order" to prevent details of the investigations being disclosed "so there is no interference in the ongoing legal process".

Police accuse the pair of having wiped the VX nerve agent into Kim's face at the airport. It remains unclear how the attackers who handled the VX, many time more deadly than Sarin, survived. Health Minister S Subramaniam said Wednesday there was no indication they had been poisoned by the toxin.

North Korea poured scorn on what it called "absurd" claims that VX -- which is deadly in tiny quantities -- was used, saying South Korea and the US were mounting a smear campaign against it. It was "the height of absurdity to claim that the person who applied VX... was left unaffected and the person to whom it was applied met a death," its official KCNA news agency cited unidentified experts as saying.

The suspects were brought to the isolated courthouse on the outskirts of the capital in a 20-vehicle convoy escorted by outriders. More than 100 heavily armed police, some wearing balaclavas and wielding automatic weapons, had secured the court.

North Korea has not acknowledged the identity of the dead man but has insisted Malaysia hand over the corpse, and says it does not accept the findings of an autopsy. A third suspect, 46-year-old North Korean man Ri Jong-Chol, is also being held but was not brought to court Wednesday. Malaysian Attorney General Mohamed Apandi Ali told AFP it would be decided by Friday whether he will be charged.

Veteran North Korean diplomat Ri Tong-Il, deputy envoy to the United Nations, told reporters Tuesday he had come to Kuala Lumpur to discuss "the return of the body of the deceased DPRK (North Korean) citizen". The women will remain in custody until their next court appearance in April, when the case is expected to be referred to a higher court where they will enter a plea.