Senior police­men insist the bomber was not clad in a burqa as suspec­ted earlie­r
By Faraz Khan
Published: February 20, 2017
Tweet Email 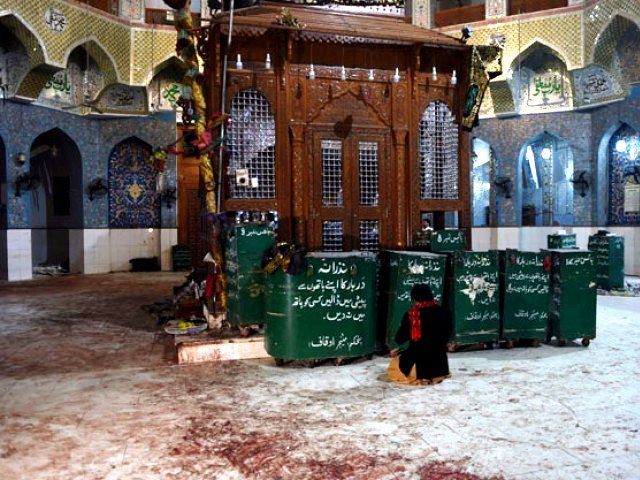 A devotee sits on the blood-stained floor a day after a bomb attack hit the 13th century Sufi shrine of Lal Shahbaz Qalandar in the town of Sehwan in Sindh on February 17, 2017. PHOTO: AFP

KARACHI: Police on Sunday claimed that the suicide bomber at Lal Shahbaz Qalandar’s shrine was captured in closed-circuit television (CCTV) footage and was not clad in a burqa, as earlier suspected.

Addressing a news briefing at the IG House, IGP Sindh Allah Dino Khawaja said that the suicide bomber who blew himself up at the shrine was caught on CCTV footage. “My department is 99% sure that the attacker was the same person captured in the footage,” he said.

Thursday’s grisly bombing in Sehwan killed at least 88 people and left more than 200 others injured.

On Friday, police registered a case against the suicide bomber and other unidentified persons involved in the bombing.

Several suspects, including three suspected facilitators, have been rounded during raids conducted across Sindh.

But investigators have not been able to nab the mastermind and other key players involved in the shrine attack.

The alleged facilitator of the attack on the Sehwan shrine was identified as Hafeez Brohi. “Brohi’s involvement cannot be ruled out in the attack,” he said.

The IG said that establishing the identity of the bomber was difficult because of the crowd.

Once the investigation is over, he said, law enforcers will be able to arrest all the culprits, including the facilitators of the attack, he added.

At least two local government officials affiliated with the PPP were picked up in connection with the Sehwan blast.

Muneer Khan Jamali Jangwani and Abdul Aziz Jamali Hamlani, representatives of Chinni and Kamal Khan UCs, respectively, were among four men picked up from Muneer’s autaq in Johi, a rural town in Dadu.

“Police say they are in custody of intelligence agencies,” Muneer’s uncle, Jangoo Khan Jamali Jangwani, told The Express Tribune. “But they are innocent.”

Jangoo identified two other men picked up from Muneer’s autaq as Habibullah and Ghulam Rasool.

According to reports, the four men, whose names surfaced during the investigation of the Sehwan blast, were picked up on February 17.

At least 24 suspects rounded up

At least two dozen more suspects were rounded up during raids and snap checks in Shikarpur, Jacobabad and Sukkur.

On Saturday, Sukkur police arrested more than 20 suspects, while 13 more were held for questioning.

Eight Afghan nationals were detained by the Jacobabad police. Five of them were later released, while three are still under interrogation.

Those released after questioning were identified as Juma Khan, Ateequllah, Qudratullah, Abdul Ghafoor and Rehmdil, while those taken into custody are Juma Din, Rehmatullah and Saeed Gul.

Similarly, Shikarpur police arrested an Afghan national, who is said to be a motorcycle mechanic. Shikarpur police moved to arrest at least six suspects from Khanpur and Jagan, but did not identify them.

In the meantime, a heavy contingent of police raided Saleem Colony and Regent Colony, detaining more than a dozen suspects during a house-to-house search. According to SSP Sukkur Amjad Ahmed Shaikh, all suspects are being interrogated.

The Khanpur taluka of Shikarpur is notorious for harbouring hardened criminals and terrorist elements.

Earlier, the chief minister also visited Sehwan. “The devotees will continue visiting the shrines without any fear,” he said.

According to him, the devotee attendance had normalised at the Qalandar’s shrine the next day of the blast.

“This is a powerful message to terrorists that they cannot snuff out the flame of our courage.”

People, he said, who died in the Sehwan attack belonged to all provinces of the country. “This shows that there still are places of peace and love where people can gather irrespective of their caste, creed, race, religion, language or sect.” (With additional reporting by our correspondent in Hyderabad)