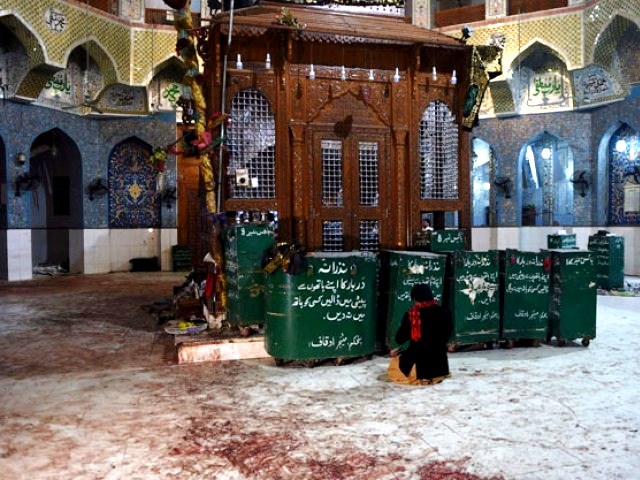 A devotee sits on the blood-stained floor a day after a bomb attack hit the 13th century Sufi shrine of Lal Shahbaz Qalandar in the town of Sehwan in Sindh on February 17, 2017. PHOTO: AFP

SEHWAN: The first thing that hits you is the pungent smell of blood. An eerie silence engulfs you as you make your way through bits of rubble to a once gray-white marble floor; it now has long, red stains all across it as if a ragged cloth was dragged from one end to another, leaving remainders of itself all along the courtyard of the mystical Lal Shahbaz Qalandar shrine in Sehwan. Once your eyes make their way past the floor you notice the traces of human flesh sticking to the wall and it reminds you, rather absurdly, of the uncanny resemblance the wondrous place suddenly has to a slaughterhouse.

A few hours earlier, the scene here was very different. Some impassioned witnesses described it as the battle of Karbala itself, cursing the descendants of Yazid, some running over bodies of the fallen, while others tried desperately to pick them up.

Others took a more pragmatic approach and insisted something like this was decidedly going to happen because the authorities never bothered to listen to the concerns of the people.

Whether you believe one side or the other, what happened the night before was, undeniably, a bloodbath.

A suicide bomber, maybe accompanied by more, blew him or herself up among a large crowd of men, women and children preparing for a Thursday evening dhamaal at the Qadeemi Gate courtyard.

“This happened at around 7pm. At first, we thought the generator had blown up. But later, when we saw people running heedlessly, and some of them covered in pools of blood, we rushed inside,” explains Ghulam Hyder Solangi, 40, a vendor selling tabarrukaats near the shrine.

“The scene was unexplainable,” he says, adding, “No one was there to help. No policemen, no rescuers. We managed everything on our own. Qingqi rickshaws were called in to transport the dead and the injured to the hospital.”

Sikandar Ali, 56, devoted to the shrine as jharookash, has more horrifying details to tell. He says that he saw a dead pregnant woman delivering a baby. And then he bursts into tears.

“I witnessed a glimpse of what qayamat will be,” he says, composing himself up. “The cruelty was unbearable. The bomber, and his senders, are beyond inhumane. Who can do this?”

Most of the people living in the vicinity have the same complaint. They say that Lal Shahbaz Qalandar’s shrine is one of the country’s most revered shrines, and yet the security arrangements here have always been inadequate. The authorities were intimated a number of times, especially after the Shah Noorani incident, but it was all in vain.

“You will see a dozen policemen escorting one man in a starched white cotton shalwar kameez. But here, at the shrine, only a few policemen were posted, and they didn’t even perform their duties sincerely,” Muhammad Rafi, 25, a volunteer chowkidar, laments.

He insisted that such a thing had never happened at the Saien’s shrine and prayed for Lal Shahbaz Qalandar to know who the culprit of this heinous act was. He added that, “there was a woman arguing with a female security volunteer inside the shrine, when it is said that another woman clad in a burqa blew herself up.”

The floor inside the shrine carries black marks caused by multiple splinters hitting it. According to a police investigator, there would have been many more casualties had the explosion taken place in the middle of the courtyard.

The blades of a fan right above the incident site is completely deformed and it is said that the remains of the suicide bombers head allegedly hung over the CCTV camera inside the shrine.

Investigators have obtained footage from almost all 40 CCTV cameras installed in and around the premises of the shrine to ascertain how the events of the night unfolded. SSP Raja Umar Khattab, who visited the site along with his team, says that it is premature to determine the gender of the bomber. He did, however, reveal that approximately eight to ten kilogrammes of explosives were used in the blast.