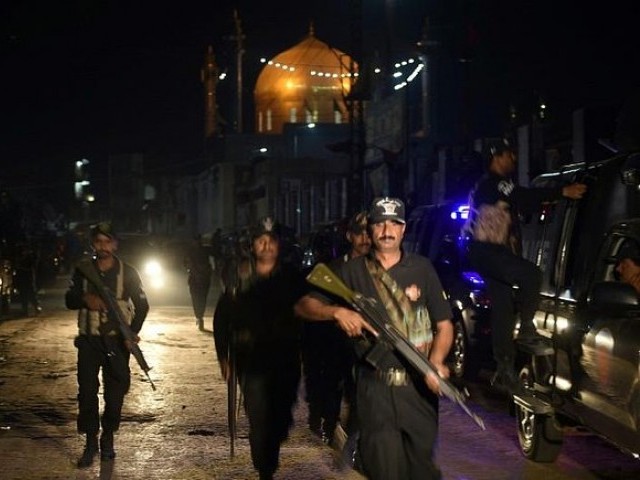 Islamic State have claimed an attack on a Sufi shrine in Sehwan, Pakistan, provoking a nationwide security clampdown. PHOTO: AFP

KARACHI / PESHAWAR: Security forces launched on Friday a nationwide crackdown on after a bomb ripped through Lal Shahbaz Qalandar’s shrine, killing over 100 militants across the country.

“Over 100 terrorists killed besides sizeable arrests during the last 24 hours,” the Inter-Services Public Relations said in a statement.

IBOs and combining ops across the country including Punjab. Over 100 Ts killed besides sizeable apprehensions during last 24 hours. pic.twitter.com/hVrzRFTSrr

“Both the federal and provincial law enforcement authorities and police started a crackdown across the country before dawn, and scores of suspects have been arrested from different cities,” a government official speaking on condition of anonymity said. He said the sweeping operation will continue for the coming days.

The Islamic State group (IS) claimed the attack, which came after a series of bloody extremist assaults this week, in the town of Sehwan in Sindh.

The Sindh provincial government announced three days of mourning as Pakistanis vented their grief and fury on social media, bemoaning the lack of medical facilities to help the wounded, with the nearest main hospital some 130 kilometres from the shrine.

Pakistan has seen a dramatic improvement in security in the past two years, but there have been multiple attacks this week. The assaults underscore Pakistan’s struggle to stamp out extremism, which was stepped up after the country’s deadliest ever attack, a TTP assault on Army Public School in Peshawar in 2014 which left more than 150 people dead – mostly children.

Sindh Rangers claimed to have killed 18 terrorists overnight in different areas of Karachi.

Seven terrorists were killed in a shootout with Rangers after they attacked a convoy of the paramilitary troops on the Super Highway near Kathor, Sindh. A convoy of Rangers was returning from Sehwan after taking part in rescue operations. A Rangers spokesperson said a soldier was injured in the exchange of fire.

Eleven more terrorists, Rangers said, were killed in a raid carried out in Manghopir area of Karachi. “Arms and ammunition was also seized during the operation,” the Rangers spokesperson added.  The Rangers said all suspects were affiliated with a banned organisation. 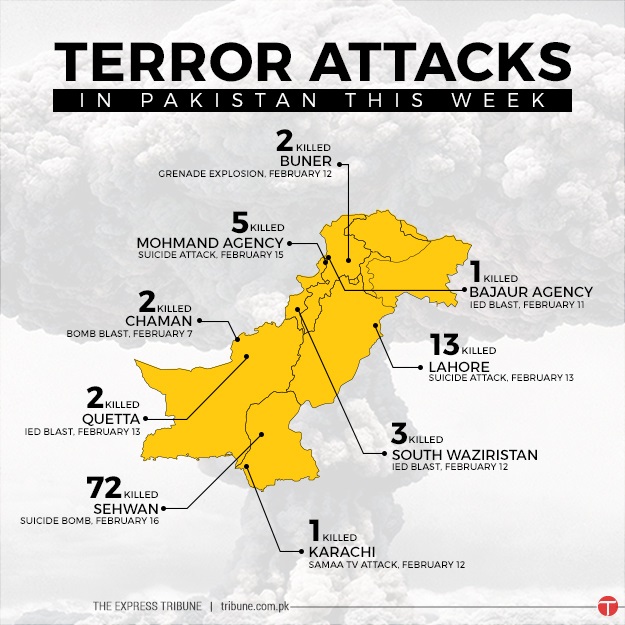 In Peshawar, three terrorists were killed in an intelligence-based operation. “Police and security forces received information about the presence of terrorists in the area so they launched an operation early morning,” a police official told The Express Tribune.

“The terrorists tried to flee in a car but they were intercepted and three of them were killed in the exchange of fire. Search for their accomplices is underway.”

“Security forces and intelligence outfits have been instructed to further intensify combing and targeted operations with the aim to eliminate terrorists and sleepers cells,” the military’s media wing said in a statement.

Meanwhile, political administration directed the locals to evacuate their houses near border areas due to the sensitive security atmosphere.

In another encounter, four suspects belonging to banned outfits were killed.

The Pak-Afghan border in Torkham remained closed on Friday as political administration announced a halt in the continuing repatriation of Afghan refugees from North Waziristan Agency until further notice.