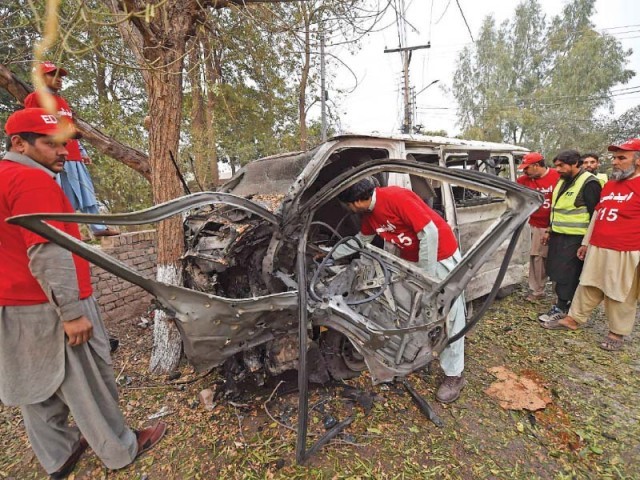 Volunteers inspect the mangled heap of a van targeted in the Peshawar suicide attack. A photo of the three Levies men killed in the Mohmand bombings. PHOTO: AFP/EXPRESS

PESHAWAR / GHALLANAI: It appears terrorists have had enough time to regroup in their ‘safe havens’ in Afghanistan after receiving a drubbing in their erstwhile bastions in Pakistan’s tribal areas. They have come out of their forced hibernation to unleash a reign of terror yet again. Two days after 13 people were massacred in wanton violence in Lahore, four suicide bombers struck in Peshawar and Mohmand tribal region, snuffing out seven innocent lives.

Five people were killed when a suicide bomber struck outside the office of the political agent in Ghallanai, the administrative headquarters of Mohmand Agency, and hours later another bomber attacked a van carrying judges in Peshawar, wounding four judges and killing their driver.

Six reported dead in cylinder blast inside house in Bahawalnagar

“Two suicide bombers approached the main Levies Gate of the administration compound around 9am and tried to force their way in,” said political administration official Asmatullah Wazir in a statement.

“The Levies force personnel challenged them, but the bombers fired a volley of gunshots at them. The Levies force officials retaliated. One bomber was taken down, while the second detonated his explosives vest after he was hit by a gunshot,” he added. 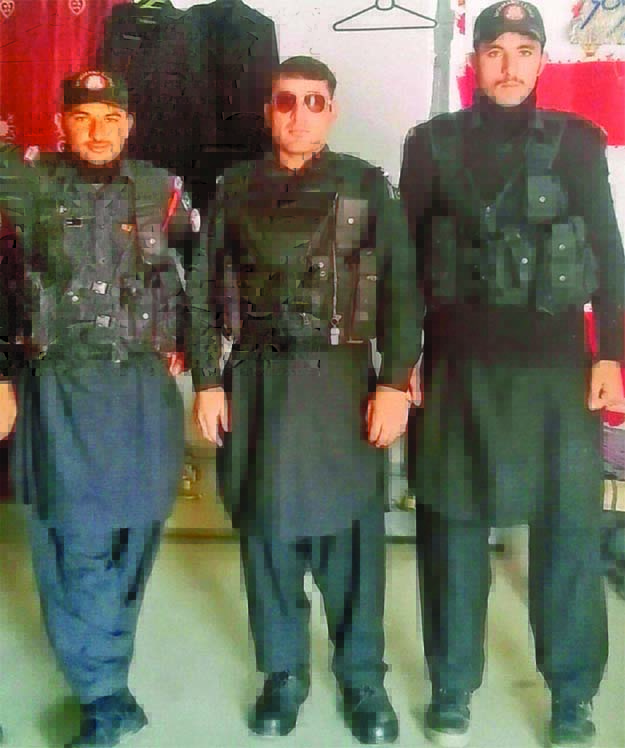 The sprawling compound houses administration offices, two boys and one girls school and residential quarters of the officials.

The military confirmed the incident in a statement issued from Rawalpindi. “The terrorist bid was foiled by security agencies who had intelligence about intrusion of suicide bombers from Afghanistan into Mohmand Agency”, said the military’s media arm, the Inter-Services Public Relations (ISPR). Three Khasadar (Levies) personnel and two civilian died in the blast.

Lahore attack: Cops killed in the line of duty

Subsequent to the blast, security forces cordoned off the area and mounted a search operation. The main road between Bajaur Agency and Peshawar was closed for five hours.  A source in the paramilitary Frontier Corps said that in the search operation in the Shiekh Banda area, near Ghallanai, five suspected terrorists were killed while they were trying to flee the area. 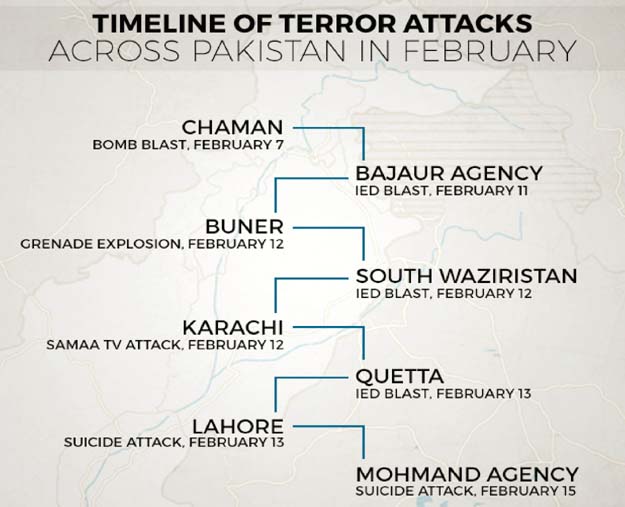 In a second suicide attack, an FC official, Khayal Hussain, was killed in Michini Mosal Kor area of Mohmand Agency. The bomber blew himself up after he was intercepted by the FC official during a search operation in Lower Mohmand, near the border with Charsadda district of Khyber-Pakhtunkhwa.

The paramilitary force also detained 20 suspects and recovered ammunitions from their possession.

Mohmand Agency, which shares a border with Afghanistan, has borne the brunt of Taliban insurgency over the past few years. On September 16, 2016, three dozen civilians were killed and as many injured in a suicide bombing at a Friday congregation in a local mosque. And two paramilitary soldiers died when four suicide bombers targeted an FC camp in Ghallanai on November 16, 2016.

Hours after Wednesday’s bombings in Mohmand Agency, a motorcycle-borne suicide bomber slammed his two-wheeler into a van carrying lower court judges in an upscale neighbourhood of Peshawar.

The van driver was killed as was the bomber, while one male and three female judges were wounded in the bombing that took place in Phase V of Hayatabad on Wednesday afternoon. Two passersby also suffered bruises. The outlawed Tehreek-e-Taliban Pakistan (TTP) claimed credit for the attack that came two days after a suicide bomber mowed down 13 people – including two senior police officers – outside the Punjab Assembly in Lahore.

Medics say the wounds of the injured judges are not life-threatening, according to CCPO Tahir Khan. “The bomber hit the van around 3.30pm when it was crossing a square,” he told The Express Tribune.

CCPO Khan said the bomber was carrying around 15 kilos of explosives in his suicide vest. “Investigators have found the body parts of the bomber,” he said. “There was no police escort with the judges’ vehicle,” he said and advised the media not to speculate and wait for the investigation to complete.

SP Cantt Imran Malik identified the slain driver as Khurshid, and the injured judges as Asif Jadoon, Amina, Tahrina, and Rabia who were driven to the nearby Hayatabad Medical Complex.

Witnesses recounted the sickening images they had seen at the bombsite. “When I heard the ear-splitting explosion I ran towards the square where I saw the driver tossed out of his seat on the ground,” one witness told The Express Tribune. “The area was enveloped in a cloud of dust and smoke.”

The body of the bomber and the motorcycle were blown into pieces, he added. In the meantime, Rescue 1122 workers reached the site and ferried the casualties to hospital.

An official of the Bomb Disposal Unit said the bomber was wearing a suicide vest, while his motorcycle was also rigged with explosives. “The motorcycle has been reduced to pieces which suggest it was rigged with around eight kilos of explosives,” he told The Express Tribune. Investigators were scrambling to find the chassis number of the two-wheeler. In an email message sent out to the media, TTP’s central spokesperson Muhammad Khurasani claimed responsibility for the attack, saying that the target were the judges. A police official said the attack took place hours before PTI Chairman Imran Khan was to visit the HMC.