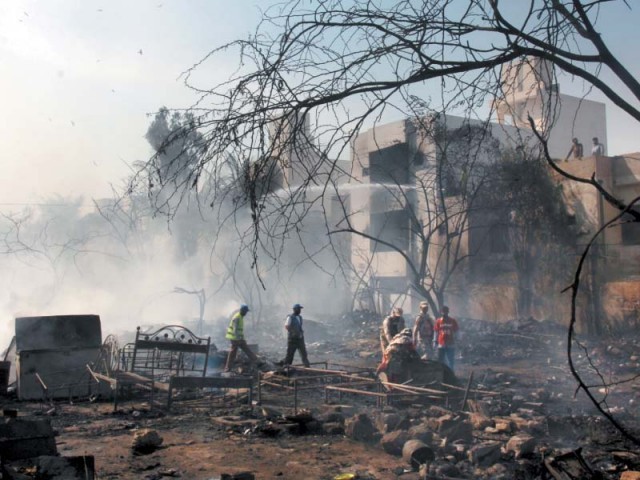 The blaze in Gulshan-e-Iqbal caused financial loss to the families living in the slums, with their valuables reduced to ashes. PHOTO: ATHAR KHAN/EXPRESS

KARACHI: As many as 60 huts were gutted when a fire broke out at a shanty town in Gulshan-e-Iqbal Tuesday afternoon.

At least three residents also sustained burn injuries when they were trying to save their houses and valuables from being burnt. The injured persons were taken to the Burns Ward of Civil Hospital, Karachi, for treatment.  Slums in Block 13 of Gulshan-e-Iqbal suddenly caught fire, which took over the entire area. The fire went out of control and engulfed over 60 huts, causing residents to flee for their lives.

According to the fire brigade spokesperson, four fire tenders immediately reached the site and, after an hour, fire-fighters brought the situation under control.

The blaze caused a huge financial loss to the families living in the slums. Fire fighters said that the cause of the fire has yet to be ascertained. However, he said, it seems the fire broke out due to a short circuit.