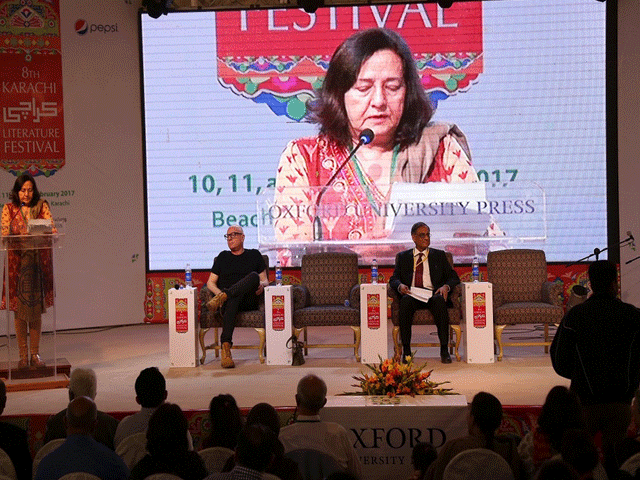 KARACHI: Borders are scratched across the hearts of men

By strangers with a calm, judicial pen,

And when the borders bleed we watch with dread

The lines of ink across the map turn red

So wrote Marya Mannes and so discussed speakers at a session, titled ‘Partition: Drawing Borders in Blood’ at the 8th Karachi Literature Festival Sunday.

“Between 500,000 to 800,000 people were killed during Partition,” said political scientist and the session’s moderator, Ishtiaq Ahmed. “The governments of Pakistan, India or Great Britain are not interested in the horrors of Partition.”

Our history: Birth of two nations or two states?

“We should take the title of this session literally, as Partition was a direct result of the apartheid nature of the colonial state,” stated the dean of Habib University’s school of arts, humanities and social sciences, Nauman Naqvi. The apartheid in the Subcontinent was based on racial divisions, he explained, adding that as a result of the immense trauma people suffered, many have ‘unclaimed experiences’. The trauma has also had an effect on our culture and has led to a twisted form of nationalism, he lamented. Feminist poet Kishwar Naheed spoke of the participation of women, including her mother, in the Muslim League rallies before Partition. “We must include those stories in which there were instances of love and respect.”

“There are ways history plays out in the lives of ordinary people,” said writer and co-founder of Kali for Women, Urvashi Butalia. We need to understand our collective history and the effect it has on people, she said. “You can’t separate people and history”.

Demise of Urdu at the hands of TV anchors

Sudheendra Kulkarni, chairperson of the Observer Research Foundation, said while the British receive most of the blame for Partition, we are no less responsible. Quoting Manto, he said, “Why have human beings become so thirsty for human blood these days”, in reference to the cruelty prevalent during Partition. People are slaves of bigotry and we must accept our role in Partition, he urged. “A lack of trust between the Muslim League and Congress spilled over to become a lack of trust between India and Pakistan,” he lamented, stressing the need for fostering trust between India and Pakistan. “India is not a threat to Pakistan, Indians should behave in a manner that reflects that and vice versa,” Kulkarni said. “We must make Partition a chapter of history never to be opened again,” he said.

Ahmed told the story of two other guests on the stage – Harbhajan Kaur, also known as Shahnaz Begum, and her youngest son, Rizwan. The child bride was married to a Muslim man and converted after her caravan travelling to Amritsar was attacked in 1947 but after having five children, a subsequent trip to India tore her from her new family. She was married to a Sikh man, believing her children were lost to her. In 2013, her stepson attempted to locate her children and his efforts bore fruit, reuniting Kaur with her children after more than 60 years. Though she refused to speak at the session, Rizwan said that his stepbrother put aside religion and helped reunite the family. “We need people like him who display real humanity,” he said.

“We should put pressure on our governments to facilitate travel between our countries because the love and joy with which people in India and Pakistan welcome each other is so great that it seems crazy to keep up the battle,” said Butalia.

Shaikh Ayaz: The voice of the people