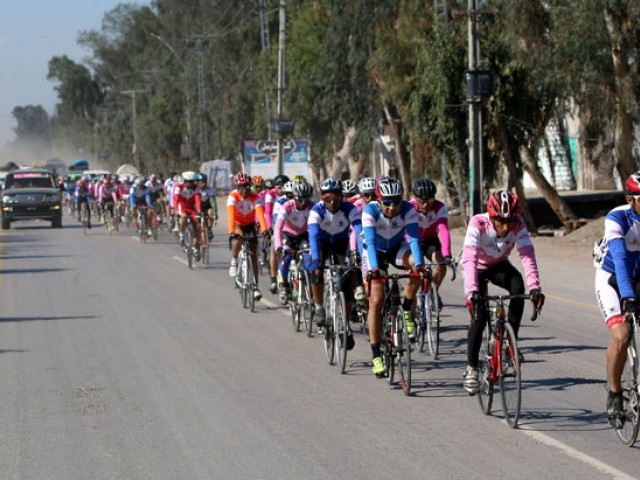 PESHAWAR: Dozens of Pakistani and Afghan cyclists embarked on a 350 kilometre race on Friday through Khyber-Pakhtunkhwa to promote international tourism and cross-border peace.

The 87 spandex-clad competitors began their journey in Peshawar, the provincial capital which has been focal-point of a home grown militancy that has claimed tens of thousands of lives since 2001.

The event included country’s top cyclists as well as a nine-member team from Afghanistan, Nisar Ahmed, president of the K-P Cycling Association said. “It is a very positive step, three to four countries will take part in the next race,” he added.

Dressed in brightly coloured gear and riding latest generation racing bikes, the cyclists attracted droves of onlookers as they crossed historic monuments such as the 1,400-year-old Peshawar fort. From there they are due to pass through Abbottabad and will then head to Islamabad for the final leg, and ride toward picturesque and hilly Nathia Galli that lies in the western Himalayan range.

Ehsan Ullah Khan, an Afghan cyclist, said such events could help bring his country closer to Pakistan. The two states have a shared religion, languages and customs, but relations are currently fraught with each accusing the other of exporting militancy. “We hope that a time will come that Pakistan and Afghanistan would be united,” he said.

Officials also hope the tour will help revive the country’s tourism industry, particularly in the northwest, following a fall in domestic militant violence as a result of successful military operations.

Syed Azhar Ali Shah, an official from the Pakistan Cycling Federation said: “The purpose of organising this tour is to promote tourism in the province of K-P, which has a lot of attractions both for local and foreign tourists.”

Army has launched a series of military offensives as well as concerted efforts to block militants’ sources of funding. Last year the country recorded its lowest number of killings in a decade, but the remnants of militant groups are still able to carry out periodic bloody attacks.