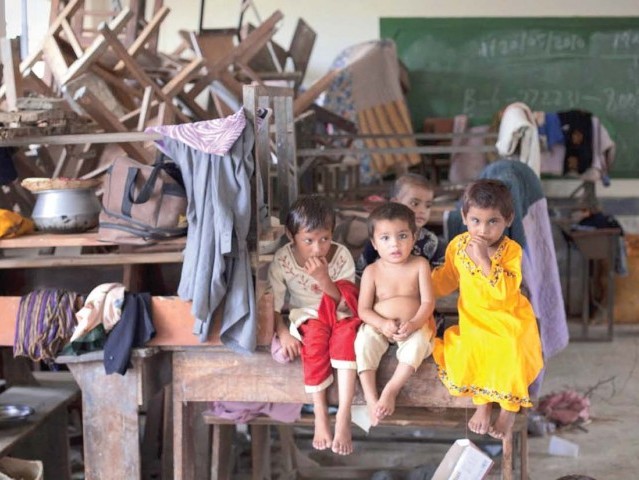 The significance of the Sindh Education Foundation initiative is felt even more in the aftermath of the floods that destroyed thousands of schools across the province. PHOTO: FILE

After the implementation of phases I and II that helped enrol 30,000 boys and girls in schools in the remotest of Sindh’s villages, the Sindh Education Foundation (SEF) launched the third phase of its project ‘Promoting Private Schooling in Rural Sindh’ (PPRS).

PPRS is a four-year pilot programme, started in 2008, that aims at establishing and assisting the management of 1,000 private schools in underserved localities. It aims at establishing long-term public-private partnerships by supporting low-cost schools to improve the quality of and access to education, said Aziz Kabani, the SEF programmes director for operations and research.

With budgetary support from the World Bank, it has been designed by SEF in collaboration with the Reform Support Unit. The districts for the pilot stage were carefully selected, keeping in mind the three key indicators – out-of-school children, gender disparity and access to education.

These 700 schools will follow the same model of the existing 300 schools established in marginalised areas where there is no other school within a radius of 1.5 kilometres, there is availability of clean drinking water, where at least one female and one male teacher is available and where there are 40 to 200 school-aged children, Kabani told The Express Tribune.

SEF ensures that the school is set up at a 1,600 sq-foot open space or a building so that there is a space of eight square feet per child.

What differentiates these schools from others is the curriculum, which has Oxford University Press books instead of Sindh Textbook Board books. SEF is now accepting applications from entrepreneurs who will be responsible for site identification, the school’s establishment, monitoring and management of the school, student enrolment, teacher training, student assessment and community mobilisation.

These co-educational schools – free for the community – are given two kinds of fee subsidies. Under the Base Model, the SEF provides the school with Rs350 per child every month. As an incentive for schools to ensure more girls are enrolled, the Base Plus Model gives Rs450 per enrolled female student to the school every month in areas where grave gender biases prevail.

SEF plans to reach out to 70,000 more primary-school students this year as more classes are added to each school. The total number of students will reach 250,000, said Kabani. “It’s not only students who benefit, but teachers, families, entrepreneurs, trainers also gain.”

However, despite the leaps and bounds made in student enrolment, the main goal is to set up schools with leadership, subject specialisation, good management, trained teachers and modern assessment systems, he said.

After the success of the pilot project, SEF plans to regularise these schools and work on setting up secondary schools as well.