Residents look on as a fire destroys hundreds of houses at an informal settlers community in Delpan, Tondo, Manila on February 7, 2017. PHOTO: AFP
MANILA:

As many as 15,000 people are homeless after a huge fire engulfed an overcrowded slum in Manila, destroying thousands of homes and sending residents fleeing with their few possessions.

The inferno started in a sprawling slum near the port late on Tuesday and raged for about 10 hours, as hundreds of firefighters from across the Philippine capital hauled their hoses across rickety, tin roofs to reach the flames.

As the blaze whipped across the squalid area, sending a huge plume of smoke billowing into the night sky, residents ran for their lives carrying refrigerators, religious icons and other valuables. Others, desperate to save their homes, used buckets of water to douse the fire. 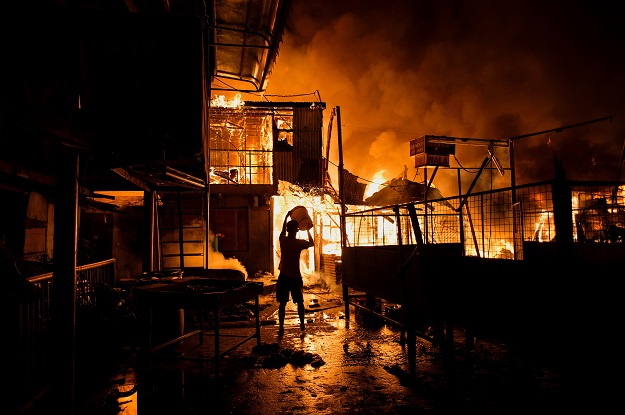 A resident pours water on a fire as it destroys hundreds of houses at an informal settlers community in Delpan, Tondo, Manila on February 7, 2017. PHOTO: AFP


About 3,200 homes, many made from little more than scrap wood, were destroyed and four people were injured, Edilberto Cruz, a fire investigator looking into the cause of blaze, told reporters on Wednesday.

"The houses in that place are all made of light materials. That is why the fire was quick to spread. We are just lucky that no one was killed," he said. 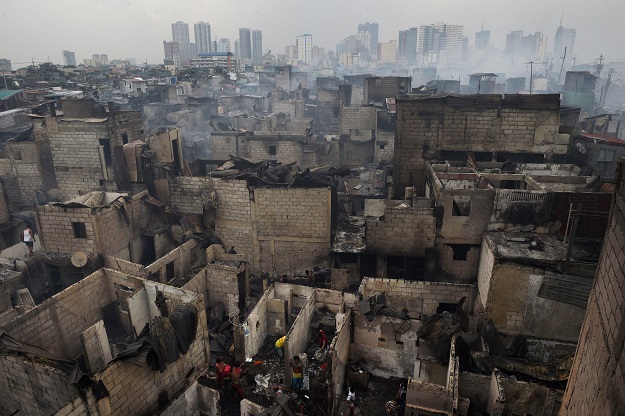 Smoke billows from houses gutted by a fire overnight in an informal settlers area, near the south harbour port, in Manila on February 8, 2017. PHOTO: AFP


Manila city government officials told AFP that between 9,000 and 15,000 people from the area, which is hit by fires almost every year, were left homeless.

At daylight thousands of people gathered on surrounding streets, warily guarding the belongings they had managed to salvage in the chaos while they waited for food and other aid to arrive. 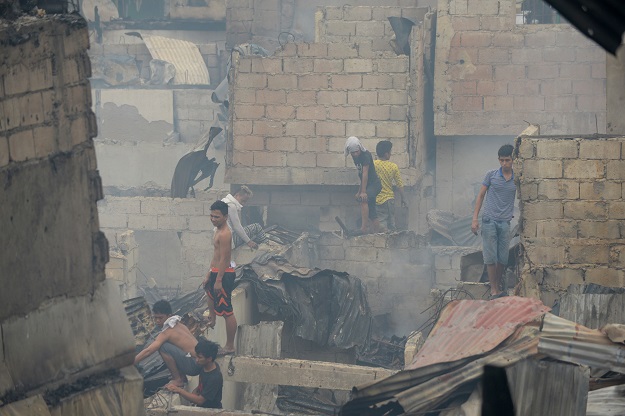 Residents collect recyclable materials amongst the ruins of their houses, which were gutted by a fire overnight, in an informal settlers area near the south harbour port in Manila on February 8, 2017. PHOTO: AFP


Temporary evacuation centres have been set up at nearby gyms and schools. The Manila fire department said such fires were common in the city's densely populated slums where many residents still use candles to light their homes.

Nearly a quarter of Manila's 13 million residents live in slums due to poverty and a shortage of low-cost housing, studies have found.

Up In Flames: Fire breaks out in warehouse