Asim Saeed among five activi­sts who went missin­g over a week ago
By AFP/REUTERS
Published: January 29, 2017
Tweet Email 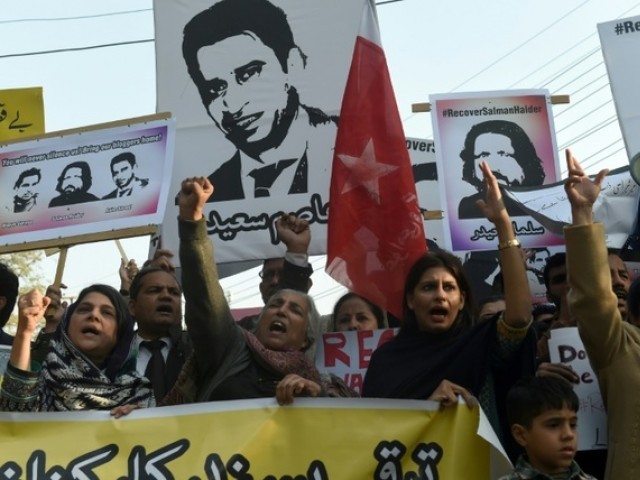 Asim was among activists five who went missing more than two weeks ago. PHOTO: AFP

ISLAMABAD: A third activist who went missing earlier this month is safe, his family told AFP on Sunday, a day after two of the other disappeared men were confirmed secure.

The activist, named only as Asim by his family for safety reasons, was among five who went missing more than two weeks ago, sparking fears of a government crackdown and resulting in protests. “Asim contacted us on phone on Sunday morning and told us that he is well,” a relative requesting anonymity told AFP, saying the family had been receiving threats.

Separately, Asim’s father Ghulam Haider told Reuters that the activist had returned to his house briefly on Saturday but then left quickly, and messaged the family on Sunday morning to inform them that he was safe and would call soon. Haider said Asim had either returned to Singapore or was in Germany.

On Saturday, academic Salman Haider and another blogger whose family asked not to be named were reported safe by their families. Two others remain unaccounted for.

The five men — who campaigned for human rights and religious freedom — went missing from various cities between January 4 and 7, triggering nationwide protests. No group has claimed responsibility.

But Human Rights Watch and other rights groups said their near simultaneous disappearances raised concerns of government involvement, which officials and intelligence sources have denied. Pakistan has had a history of enforced disappearances over the past decade, but this has mainly been confined to conflict zones near the Afghanistan border or to Balochistan.

A virulent social media campaign painting the missing as blasphemers triggered a flood of threats despite denials from their worried families, with observers saying the claims could place them in danger. The charge, which can carry the death penalty, is hugely sensitive in Pakistan, where even unproven allegations have stirred mob lynchings and murder.