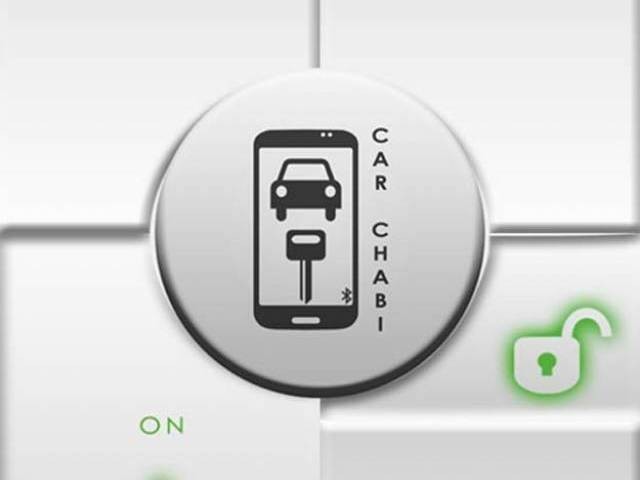 Car Chabi’s smart device lets you do away with your car keys. PHOTO: CAR CHABI

Car Chabi’s smart device lets you do away with your car keys. You can lock, unlock, start and stop your car from your phone. It also lets you secure the car and turn the AC and heater on/off from a distance of about 50 to 80 feet.

The startup is led by two young entrepreneurs, CEO Muhammad Ali Rashid and COO Hammad Siddiqui, who came up with the idea while working as engineering graduates in the capital city of Punjab.

“We believe that this investment will help speed up our research and development in providing solutions which will give the people an ease in their lives,” Siddiqui said while talking to The Express Tribune.

He added that Car Chabi is just one example of what we kind of ease we can provide to the general masses.

Giving insight into their future plans, he said: “We will also be focusing on mass production of our current product Car Chabi and looking to expand all over Pakistan as well as in the Middle East.”

The startup, which started its operations in January last year, has so far been able to produce 1,000 units of the Car Chabi device and generate $30,000 in revenue.

Explaining their ideology, Car Chabi CEO Rashid said, “Our customers are the people who love cars and technology. With us making life enhancing products, it is going to improve their lives in one way or another.”

This Pakistani startup is revolutionising the way people travel

Car Chabi is currently being accelerated at PITB-backed PlanX, where it is connected with Executive Director of Treet Group of Companies Syed Shehryar Ali.

Expressing his confidence in the startup, Shehryar said, “Automation is the future and Pakistan still has a long way to go. Car Chabi will get the first mover advantage. A decade or two ago what we considered a luxury [cell phones, laptops, etc] has now all become a necessity. There is no doubt in my mind that automation of products will follow this trend in years to come. I think it’s a great investment otherwise I wouldn’t have gone for it.”

As a result of the investment, Car Chabi will now operate and be held under a parent company, named RoboArt Pvt Ltd.